Melvyn Bragg writes for Northern Soul about the cultural asset stripping of the North of England.

It is so very predictable isn’t it. London in trouble or wanting to rationalise or use the iron heel, or merely enjoy wasting or harrowing the North, and back it comes. Slash and burn. It started in 1066 and it stopped only once.

It stopped when the North became a real powerhouse. When the skills and crafts and capacity for fierce work turned the North into the industrial centre of an Empire and gave these small islands 35 per cent of world trade, gave rise to the greatest Revolution that there has ever been – the Industrial Revolution – and made money money money. Yet even then it could still not escape condescension. ‘Where there’s muck there’s money’ etc.

But most of the time the North has been raided and ravaged, almost as a reflex action when there was trouble in the capital.

It is such a place of richness. It led the growth of the mediaeval wealth of England with its Yorkshire wool industry. It inspired one of the most widespread intellectual and human changes in thought and feeling – the Romantic Movement. It has fed the world with deep seams of talent, layer on layer from popular music to great poetry, from comedy to the invention of rock climbing and mountaineering. It is not difficult to add to the list.

But perhaps above all it gave what is now England the foundation stones of its identity. These were the Lindisfarne Gospels and at about the same time the work of the Venerable Bede mentioned with praise by Dante and by scholars ever since.

At last it seemed money and resources had been found to mark this, not only to honour it but to bring all this into the currency of today. Bede and the Lindisfarne Gospels were the first of the defining Northern powerhouse. And what happens? Bede’s world is shut down. The ideology of austerity authorises cuts cuts cuts. And culture is the easiest cut of all.

But it is also the deepest and cruellest. With museums being closed all over the North, and libraries losing their place, and galleries struggling, and theatres anxiously waiting for a little nod to enable them to eke out another few months, we have lost the windows to the past which are essential for any group of people if they are to move forward and grow out of the same soil. We have also lost the examples that were before us. The chance for this generation and future generations of children to see the miracles of what was possible in the places in which they live and play and work. To feel pride that somewhere back then people like them did such things and did them so well even centuries ago that now in the winter of 2016 pride and inspiration can still be found in encountering, enjoying being part of what was, of what our people did.

Killing a culture or, if that is too crude, wounding it and letting it bleed is an attack on the richness of life that has been and could be again. It is asset stripping of the imagination which is the greatest gift we have. 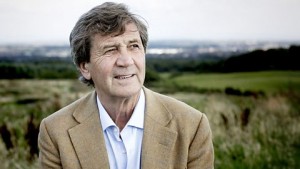 Born in Cumbria, Melvyn Bragg is an award-winning author and broadcaster. During a career spanning many decades, he is perhaps best known for The South Bank Show and Radio 4’s In Our Time. His many accolades include Honorary Fellowship of the British Academy, President of the National Academy of Writing, Vice President of the Friends of the British Library and Chairman of the Arts Council Literature Panel. He has been longlisted for the Man Booker Prize three times, and won the John Llewellyn Rhys Prize and the WHSmith Literary Award.

Melvyn Bragg’s latest book, Now is the Time, is out now