Andy Murray November 16, 2021 Arts, Cinema Comments Off on “My films are like my kids.” Acclaimed film-maker Mike Leigh talks to Northern Soul 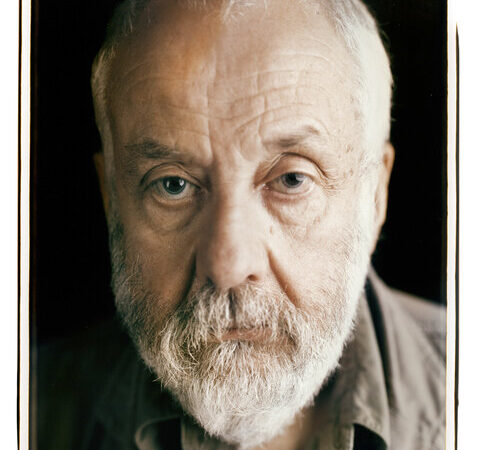 Much garlanded and Salford-raised film-maker Mike Leigh, now 78, is speaking to Northern Soul at HOME in Manchester on the occasion of a new touring retrospective of his work.

“What I do, and have done over the years, it’s popular, but I have to admit, in some ways, it’s kind of a bit niche,” Leigh says. “You know, it’s not, well, it certainly isn’t James Bond.”

Your take on James Bond would be something to see, though, Northern Soul suggests. Leigh chuckles.

“It’s funny you should say that. There are two things about that. One is that at the BAFTAs, back in the day, I got the best director award for Vera Drake. There was a do, we’d all had a few, and on the way out somebody introduced me to [Bond producer/supremo] Barbara Broccoli, who was very nice. She said ‘ah, great, I really liked the film’ and blah blah blah. We’re walking out and somebody said, ‘well done, Mike’. They looked at us and I said, ‘I’m directing the next James Bond film’. And they went ‘ah, great, great!’. She fell apart, she thought it was the funniest thing. So, there’s that.

“The other thing is that I’ve always had this not very-serious-idea for a wheeze. I’ve always said I’d like to make a James Bond film in which the entire film is about James Bond going to see his sick mother in her house. Just that. And if James Bond had ever been played by an interesting actor, that I thought I could do an interesting thing with, which it hasn’t, really, I’d probably try and push the idea. But I’m not really serious. That’s just kind of a joke.”

For more than 50 years, Leigh has been building up a distinctive, award-winning oeuvre of stage and television plays, and, most recently, feature films. The current BFI retrospective celebrates the latter, notably a new 4K remaster of his hard-hitting 1993 film Naked, with screenings to come at HOME of some of his finest TV work, including Hard Labour, Grown-Ups and Nuts in May. 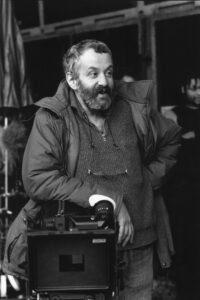 On the question of whether his feelings about a retrospective such as this are purely positive, Leigh leaps straight in. “Totally. It’s all positive. Nothing negative about it at all that I can make out.”

Is there not some degree to which the subject of a retrospective might feel slightly edgy – boxed-off, boxed-in? “No, no! Look, here’s the thing. You make these films, some of them people remember, some of them they don’t. Some of them are popular, some of them sink without a trace. They’re all have a shorter or longer life, and to have them pulled out and screened…and people are going to see them. I’ve been doing Q&As and things, and not only are they full, which is great, but there’s a lot of young people there. I mean, you could be forgiven for thinking only the old lags will show up. But no way. It’s just very good news.”

Does he ever rewatch his own earlier films, outside of attending these kinds of screenings?

“Yeah, I do. I like watching my films. I’m not like Gloria Swanson in Sunset Boulevard, watching them every night to remind myself that I exist, but here’s the thing. I know quite a lot of directors who say of this, that or the other film that they’ve made ‘oh, I can’t f***ing watch it, I just never want to see it again’. And that’s because somebody f***ed up. They had to recut it, to change the ending, they had to cast people they didn’t want to cast. They didn’t make the film they wanted to make. Now. I’ve been very lucky, mainly because if there’s any chance with a project that there’s going to be interference or compromise, I walk away, it doesn’t happen. I’ve never made a film that was interfered with, so my films are like my kids – I like them!” 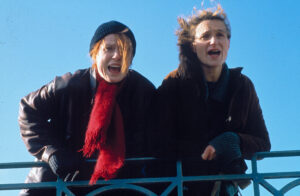 That being the case, does he have a film he feels has been underappreciated – a neglected child, as it were?

“Well, for example, Career Girls slightly sank without trace a bit, partly because it came immediately after Secrets & Lies, and I’m very fond of it. It was just a bit neglected. I’ve got a soft spot for Meantime. But I mean, I suppose I’m never quite as keen on Life is Sweet as some of my other films, for no discernible reason. It’s just one of those things. I don’t dislike it, I’m not ashamed of it or anything, but it’s not my favourite.”

Famously, Leigh doesn’t start off a film project by writing a script, instead involving actors in an extended rehearsal/improvisation process to develop characters and a story. He’s cagey about discussing the precise details of this process. At the end of the day, though, surely, it’s just hard work rather than some kind of magic trick?

“The so-called process by which we make these films, bring them into existence, it is very complex,” he says. “It involves stuff that makes absolute sense to anyone who’s involved in it in the rehearsal space, in the improvisations and all that, but it’s not easily understood unless you know what that’s all about. I’m not protective. It’s just that there’s some stuff about it that is, in the end, private. It’s not private for any sort of disgusting reason. It’s private because it is a creative process that only involves the people that did it.” 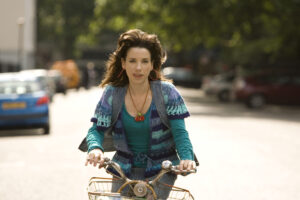 One part of the process that Leigh is open about is that he starts by asking the actors to draw up lists of people they know who could provide inspiration for creating a character. Sometimes, those lists are on the extensive side.

“David Thewlis held the record for quite a long time, because he had a list of over 100 people. That record was broken by Sally Hawkins when we prepared Happy-Go-Lucky. She went over the 200 mark.” These lists are discussed, whittled down and, gradually, characters are arrived at. In fact, the character Thewlis was arriving at was the scarily intense Northern polymath Johnny in Naked. It’s long been rumoured around these parts that The Fall’s Mark E Smith inspired that character, but Leigh scotches this. “Rubbish. It’s rubbish. I’ve never heard it and I don’t know where it comes from.” Not even on a list of over 100 people? ”No. I know because I know who he based it on. No, that’s not true.” 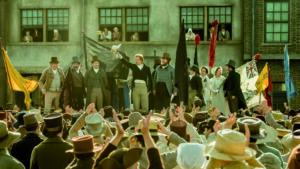 During lockdown, Leigh took the opportunity to read, among other things, the complete works of Philip Roth and Zadie Smith. “I’ve done a lot more reading than I probably would have done in the same amount of time, just because of having the time to do it. I mean, I haven’t actually done anything towards making a new piece, other than some research into possible things that I might be interested in. People say ‘oh, have you written a script?’ No, I don’t write scripts, that’s not how it works. So, no. It’s actually four years since we were working on Peterloo, so it’s quite a long stretch. We were going to make a film which lockdown scuppered.” Leigh’s Peterloo film had a decidedly mixed reception, but he says: “I personally think we achieved a lot with it, even though not one frame of it was shot in Manchester. Down here where it happened, there are too many posh coffee places now.”

Several of Leigh’s most recent films – Topsy Turvy, Vera Drake, Mr Turner and Peterloo – have been period pieces, all but one set in the 19th century. Is this a pattern, then? Does he feel like he’s told all the stories he wants to tell about the present day? 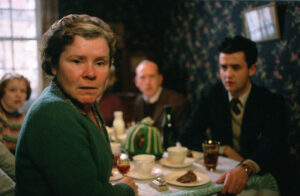 “No, no,” he insists. “I mean there’s a lot going on worth looking at, on all sorts of levels really. So no, not at all. Anyway, making a period film doesn’t mean you’re not making a film about now and I would suggest, pretty obviously, that Peterloo is no exception. As we were preparing it, between 2014 and when we made in 2017, we had an ever-increasing feeling that it was prescient and relevant. Democracy, isn’t it? The thing that I’ve not cracked yet is to do something contemporary on the scale of Peterloo, but we’re out there trying to find some dosh. We’ll see what happens.”

Over the many times that Leigh has been cited as an influence by other writers and directors, has he ever looked at their work and wished they’d never mentioned him in the same breath? At this, he allows himself a full-on chuckle.

“It’s not…on the one hand, it’s flattering, of course it is. But I have had this where I’m thinking, not so much that I didn’t want to be mentioned, but I think ‘well, I might have been an influence but I wasn’t that much of an influence’.’”

The Mike Leigh Retrospective continues at HOME Manchester until November 30, 2021.

The BFI’s 4K remaster of Naked is showing at HOME and other UK cinemas now.