“What sort of clothes should I be putting on?” said Wor Lad as we were getting ready for a meal at Artisan.

Little did I know I wasn’t just describing the appropriate evening wear for our imminent dining experience. Smart-casual should be used as an umbrella term – a slogan even – for Manchester’s Artisan. From the atmosphere to the food, the décor to the drinks, the general feel of the place is one of high quality without a whiff of social stigma.

Take the menu for example. It serves the kind of comfort food (burgers, pizzas and the like) you’d be likely to scoff for a mid-week treat, but also delicate and refined dishes such as the fillet steak, baked fish and deli boards that you’d reserve for a special night out.

And with a new menu on the cards, there are plenty of delectable dishes to choose from. I tried the hake which was baked in a banana leaf and topped with herby breadcrumbs (almost like stuffing), and cooked to perfection. Very light and moreish, working especially well with the accompanying lime juice and served with sticky coconut rice: it was deceptively filling. Wor Lad found the seafood pizza – packed with scallops, mussels, calamari, tuna and prawns – “really fresh and well cooked, very tasty”.

I should mention that Artisan is one of those places which has no actual plates. Instead, all of the food is served on blocks of wood and slate. It’s the type of presentation that many would deem Instagram-worthy. 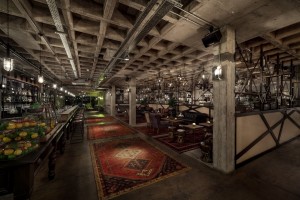 But the desserts are the real deal breaker. My chocolate fondant induced a mild level of euphoria as I broke open the soft, chocolate cake to reveal the gooey, oozing chocolate core. And Wor Lad’s homemade doughnuts with cinnamon sugar and caramel dipping sauce were equally scrumptious (and this coming from someone who doesn’t dig the current Krispy Kreme craze).

The staff are very attentive, sometimes uncomfortably so, and helpful with menu choices, while the live music creates a laid-back atmosphere. Piped through the speakers so everyone can hear – it’s a good idea and a relaxing feature.

As for décor, I don’t think I can best Artisan’s own description on its website: ‘Think artist’s loft studio meets concrete warehouse.’ It’s exactly that. Modern artworks adorn the walls and are for sale, though at prices that only Premier League stars could afford. Still, they are rather nice to look at.

The restaurant itself is long, and I mean seriously long, so much so that diners at the far end of the room are the size of Playmobil figures. There’s a spacious bar area that’s cut off enough to not disturb diners, but not so much that it feels like a separate room. Packed with patrons, and an assortment of comfy sofas and armchairs, it’s obviously a popular place for a tipple.

So no need to worry about committing a faux pas if you’re planning to head down to Artisan. Just go, be yourself, unwind and enjoy the food. It’s crisp, clean and eager to please. 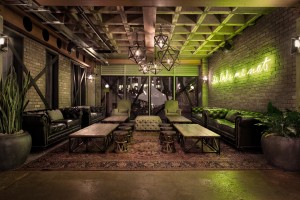