It’s understandable that a certain sense of trepidation hangs over this particular show.

Nick Cave and the Bad Seeds last played Manchester four years ago, and a number of tragic events have happened in the meantime, both to Cave himself and to Manchester Arena. On a completely different note, there’s a lingering worry that Cave, an alternative sort of rock music titan, might not truly belong in a venue of this sheer size. The surprise, then, is that the gig belies all those reservations, big style. Cave seems to inhabit the Arena as though it’s very much his natural habitat, bringing an entirely human, personal touch to proceedings as he does so.

Things start in suitably dramatic, pared-down fashion with Warren Ellis at a piano in a single spotlight, picking out the opening chords of Anthrocene. Sure enough, this isn’t a show that relies on an elaborate stage set or a flashy light-show. In fact, the lighting’s up unusually high, which stokes the feeling that this is a surprisingly intimate experience shared between band and audience, rather than a case of performers at one end of a hangar with the punters tucked away behind a barrier in the dark. Instead, it’s simply Cave and the six Seeds, clad in standard-issue black suits, performing their songs in a no-nonsense, yet entirely engaging fashion. 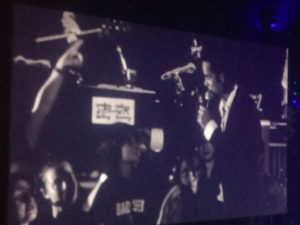 Cave rises to the occasion with aplomb, and makes for a hugely personable showman. Indeed, he’s rarely ever appeared quite this light and chatty. In several interviews, he’s remarked that, for him, playing live is all about connecting with the audience and witnessing, in person, how they respond to his songs. That’s very much the case here. Three days after his 60th birthday, no less, he’s only too eager to leap onto platforms beyond the stage in spring-heeled fashion and lean right down close to the crowd. At one point, this interaction leads to one over-enthusiastic punter heckling him about the colour of his socks. Words are had, but even this ends on an upbeat note: long story, but the heckler gets to go home with one of Cave’s socks (presumably, eBay beckons).

At well over two hours, it’s a generous, well-paced show. Technically this tour is promoting last year’s stark Skeleton Tree album, and unsurprisingly the setlist takes in plenty of the latest material – Jesus Alone, I Need You and Girl in Amber among them. There’s also a good quota of older songs such as From Her to Eternity, The Ship Song and The Mercy Seat, though very little from the mid-career era. There’s a meditative tone to much of this material, so that the louder, more pounding moments, such as Red Right Hand – which comes complete with a sly reference to Trump and his “angry little tweets” – are thrown into sharp relief. Even a virtual duet on the ethereal Distant Sky, with singer Else Torp projected up on a huge screen, feels soulful where it could so easily have fallen flat. 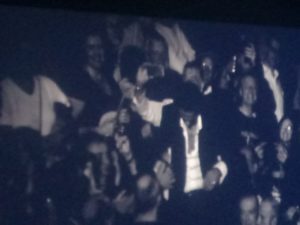 The band, needless to say, are ridiculously tight and capable. Cave stands like a living, live-wire conduit between them and the audience, conducting and heaping praise on them. He leads into a moving performance of Into My Arms by remarking that it’s a privilege to be in Manchester in this venue, and it’s a genuine, heartfelt moment which seems to encapsulate the entire night in microcosm.

By the encores, Cave has jumped right down into the audience, eventually bringing a gaggle of them back up onstage with him. He leads them in a raucous sing-along version of Stagger Lee, and then sits them down to form an impromptu choir for the closing Push the Sky Away. One of them is a boy of about 11 who’s apparently flown from New York for the show. All told, it’s just that kind of night: a special, joyous occasion, in spite of all the odds. Cave is simply adored by his public, and it’s touching that he throws himself into demonstrating that the feeling is mutual.