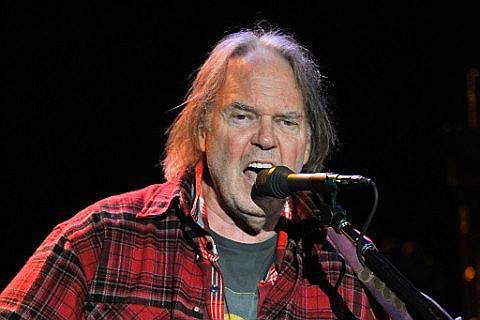 There’s no doubt about it – Neil Young is an unpredictable ‘ol cuss. Over the years, he’s gone down all sorts of musical by-roads and some dead ends as the fancy takes him, released albums of feedback, or baffled even the most dedicated fans by playing them a whole new album live, in sequence, before they’ve had the chance to hear any of it. I can well remember once taking someone along to a show who’d never seen Young before, to find that he only played the yet-to-be-released Greendale, an album even die-hard fans find hard to love, from end to end. I had to laugh but my friend was practically in tears by the end.

When he’s playing live with his old road warrior buddies Crazy Horse, the chances are pretty good that you’re going to get one of his ‘everything up to 11’ interstellar overdrive shows – fabulous fun for those of us who love all that wild and crazy stuff but less so for those unobservant characters who expect him to still be doing After The Gold Rush and Heart of Gold after all these years, despite his well-publicised observation about the latter song that “it put me in the middle of the road. Travelling there soon became a bore so I headed for the ditch. A rougher ride but I saw more interesting people there”.

Weirdly enough, his show at the Liverpool Echo Arena, although it was mostly of the guitar-mangling persuasion, starting with great squalls of guitar noise as Love And Only Love crashed and careened along and finishing with an even more deranged version of Like A Hurricane, actually did feature acoustic and achingly sincere versions of After The Gold Rush and Heart Of Gold mid-set, along with a version of Blowin’ In The Wind. Young introduced the Dylan song as one of the greatest ever written. Personally, I could live with never hearing it again, especially when a bunch of baby-boomers are singing along, but there’s a reason it’s remained popular, I suppose. It wasn’t during that anthem, though, but during Rocking In The Free World that the odd Palestinian flag was unfurled in the crowd, apparently acknowledging that Young had just cancelled a planned show in Tel Aviv.

I shouldn’t forget, though, to acknowledge two notable support acts. Local boy Ian McNabb is such an acolyte that he once recorded one of his better albums, Head Like A Rock, with Crazy Horse and played Danny Whitten’s lovely (I Don’t Want To) Talk About It as part of his brief acoustic opener. More challenging and intriguing were the previously-unheard-of The Last Internationale, a bunch of strident young folk who I  bet worship at the feet of the MC5. All high-energy calls to arms and unselfconscious punk attitudinising, they even had a song “about the Revolution in 1968. It’s called 1968” and covered Buffy St. Marie’s Codine. It’s easy enough to mock but, you know what?, good for them and long may they run.

Both their sets taken together were probably about as long as some of Young’s wilder guitar solos, particularly on Love To Burn. Drummer Ralph Molina and guitar foil Frank ‘Poncho’ Sampedro (bassist Billy Talbot was indisposed and Rick Rosas depped) gamely do their best to keep up and a couple of un-introduced female backing singers do their stuff when they get the chance, but this really is Young’s show. Unless, that is, you count the cigar-store Indian stage-side from which (whom?) the crazy-like-a-fox Young pretends to be taking advice.

Between them they pound and pummel through stuff from Zuma like Barstool Blues and Don’t Cry No Tears, or Psychedelic Pill. It’s ragged and it’s glorious, it’s maddening and it’s magnificent. For the most part, it ain’t Harvest, that’s for sure, but, like I said, there’s a bit of that in there too for those of a more delicate sensibility. By the end of Like A Hurricane, Young has literally shredded his guitar and probably shredded some people’s nerves too. But he has never been afraid to fly his freak flag high and, if it really is better to burn out than to fade away, then his still-burning energy and furious commitment seems like a pretty good way to go.

What: Neil Young and Crazy Horse

Where: Liverpool Echo Arena and touring