Promises are made to be broken, so it naturally follows that New Year resolutions are too.

It took me five consecutive years of swearing never to bite my nails again to actually stop – hardly an effective method. It’s with a certain amount of trepidation, then, that I call the following a resolution, but this year I am committing myself to at least one activity a week that I can only do in London.

I have just six months left living in halls, and after that it’s unlikely I’ll ever be able to afford a W1 postcode again. So I’ve decided it’s time to make the most of being a student (with a disgraceful amount of free time) in the centre of the capital. 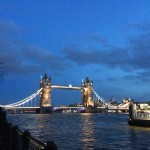 Until I moved here for university, I’d never even been to the British Museum. I’m a history student. Let that sink in. And to this day I’ve never strolled down Brick Lane or ambled up to Primrose Hill. I’ve never been on the London Eye or seen a West End show. I’ve never ticked all the tourist boxes that London has to offer.

The concept of being a tourist in your own city is an odd one, but for a university student it feels like a necessary rite of passage. The more I think about the idea of going to university, the more I realise how risky it is. You choose a new city to live in based on a website, a prospectus and a day trip – and that’s if you’re organised. Suddenly, you’re in unknown territory. So maybe being a tourist isn’t a bad thing. It’s a quick and fun way to explore a new city and also means that if someone pays you the compliment of asking for directions, you don’t feel like such a massive fraud. 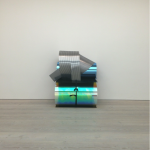 Here’s what I’ve gotten up to so far…

The first stop on my list was a trip to the Saatchi Gallery to see its exhibition of all female artists, Champagne Life. It was a great exhibition, granted, but I always forget how small the Saatchi is. It would be a challenge to spend more than an hour perusing their displays, as interesting as they are – not a patch on The Whitworth in Manchester. 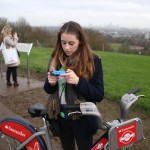 Killing two birds with one stone, I decided to rent a Boris bike and head to Hampstead Heath. Brisk weather and rosy cheeks ensued, but I survived cycling in central London, so that’s something. I can’t take complete credit for that, though – thanks go to Hannah Binney for her tour guide/photographer skills/keeping me alive. Also, Hampstead Heath is really quite lovely. I’m almost ashamed to say that Platt Fields Park will never hold the same appeal again.

This one I have done before, but there’s so much to see (and eat) that I feel like a tourist every time I go. Camden markets are a great way to mooch away a Saturday and the food market is my favourite part – even Costco can’t top this place for free tasters. 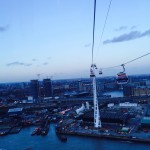 While I would consider the Emirates Air Line a tourist attraction, for many it’s just their daily commute. And what a commute it must be given the stunning view of London it offers. I don’t often venture south of the river but this was worth the trip, if only to see the look on my brother’s face when he realised half way across that he is scared of heights.

A brief visit to Tower Bridge by night afforded an incredible view and several accidental photo-bombs (apologies to the families whose photos I crashed). It’s busier than you’d expect it to be so late. 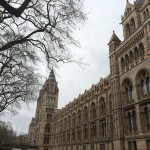 The Natural History Museum is essentially a child’s playground; step inside the human biology section and you feel like you’ve gone back to primary school, albeit with a much more informative narrative of the birds and the bees than we ever got. The volcano section, complete with a moving Kobe Supermarket (earthquake simulator), reminded me of school trips to Manchester’s Museum of Science and Industry with all its interactive elements. A fun way to spend an hour or two, but perhaps more suited to families than hungover students. 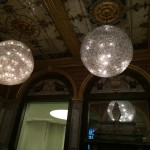 The V&A is fabulous for all sorts of reasons, but its café is one of the more unexpected. Not only is there a cake selection to rival Manchester’s finest, but the décor is equally likely to make you drool.

I’ll be sharing the rest of my London adventures on Twitter, so do follow me if you fancy seeing what I get up to (@DaphneDelilah). You can even tweet suggestions by using #ChipsnGravyLondon.