Review: The Massive Tragedy of Madame Bovary! at Liverpool Everyman 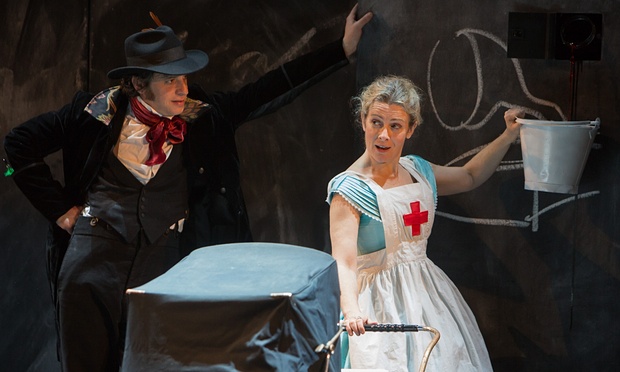 When approaching a stage adaptation of a literary classic, it can be useful to be familiar with the source material, particularly if you intend to review the show. In the past, when time has allowed, I have indeed done a spot of power-reading before taking my seat, all the better to compare and contrast in the manner of a conscientious GCSE student.

When faced with Gustave Flaubert’s 1856 novel Madame Bovary, however, I admit that its 500-plus pages proved too much to consume in between taking the kids to ju jitsu, watching Happy Valley, and the small matter of earning a living. I’m afraid I entered Liverpool’s Everyman Theatre thinking that perhaps I was about to be found out.

I needn’t have worried because this production – The Massive Tragedy of Madame Bovary! to give it its full title – is a wise-cracking comic deconstruction of Flaubert’s doorstopper rather than a straight adaptation. You get the story of course, but it’s also stuffed with more winks and nudges than Eric Idle ever dreamt possible, with layer upon layer of actors playing characters playing actors talking about the book, the show, the audience, the weather. They even ask for a show of hands to see how many people have read the original text. Let’s just say I wasn’t in the minority.

This is a production that’s as meta as they come. In fact this Madame Bovary is mega-meta. 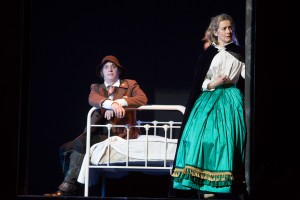 I should have known it would be this way. The show has been created by Peepolykus, a company known for slapsticky, high quality clowning whose No Wise Men made an irresistibly irreverent Christmas show at Liverpool Playhouse in 2010. That production was directed by Gemma Bodinetz, artistic director of the Everyman and Playhouse, who again takes the reins of this capering beast.

With an approach like this, the quality of the comedy better be good, and for the most part it’s joyous stuff. Four actors play all the parts in a dizzying whirlwind of quick changes, breakneck sprints and improbable reappearances on the opposite side of the stage.

First to appear are the terrific John Nicholson and Javier Marzan, the co-artistic directors of Peepolykus and the writers of this show. They initially turn up as rat-catchers on their way to Yonville, the fictional Normandy town in which the novel is set, but soon reappear in a head-spinning variety of different guises. They are superb comic performers, able to combine slapstick with sophisticated word play and engaging fourth wall-busting chat with the crowd. They are joined by Jonathan Holmes, another skilled comic actor who plays around 15 parts, from footmen to priests to a Marchioness. And then there’s Emma Fielding as Emma Bovary, the woman whose joyless marriage sends her on an existential journey of the mind. Fielding is well known for her work in serious drama, but here she reveals a gift for eccentric comedy too.

You might wonder why it would be worth taking this kind of approach to a classic text. Why not give us the story without the smirks, and let us experience Emma Bovary’s inner torment in a manner closer to that which Flaubert might have intended? Deep into the first half I did start to wonder this myself, as the more knowing commentary on the text seemed to have been left far behind and we were cantering through plot points played for laughs. 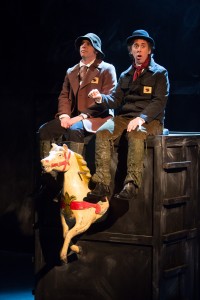 What becomes clear, however, is that the show’s creators don’t only want to tell us this story. They want to talk about the role of women in fiction, to pass comment on the societal forces that created these tragic heroines in the first place and, it turns out, to give Bovary some 21st century power over her destiny. And having been permitted to assert herself in a surprising way, it’s a treat to discover what she does with her new-found sense of control.

The set, designed by Conor Murphy, is minimal and flexible – a vast expanse of blackboard paint on which props and place names, diversions and dates can be sketched out in a flash. I loved the fact that previously chalked notions and ideas had left their dusty smudge behind, as if we were catching just the current iteration of an ever-shifting show – the culmination of a thought-process that had led to this point, but that might lead somewhere else tomorrow.

If there’s a flaw, it seems to be in the show’s length. The first half runs at almost an hour and 30 minutes, which feels too long to sustain comedy at this level. By the interval, my face felt fixed in an aching half-smile and the belly laughs were coming less frequently. And though shorter, the second half also sees things flagging a little, though there are some exquisite twists waiting for those who stay the course, both hilarious and unexpectedly powerful.

Ultimately, however, the sheer force of the wit and invention wins through and I left the theatre with a head full of precious comic moments. There are some beautifully choreographed set-pieces, particularly a delicious swoop back through time soundtracked by The Windmills of Your Mind, some nuptial night shadow play that reveals the gulf between Bovary and her husband, and an open-air sex scene that conjures magic in the most unexpected of ways.

Sit tight and you will get to witness the massive tragedy at the heart of this tale, but there are some bloody big laughs along the way. And the best thing? You don’t even have to have read it to get the joke. 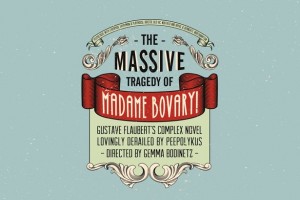 What: The Massive Tragedy of Madame Bovary!