Soon enough, when you’re discussing Pete Williams’ music career, the subject of Dexys is going to crop up. So here goes: Williams was the bassist in the band’s original Geno-era line up, before leaving to pursue his own creative interests with other outfits including The Bureau and These Tender Virtues. He rejoined the reactivated Dexys in 2003.

From a certain perspective – a lazy, incorrect one – Dexys is basically Kevin Rowland’s band. But Rowland has always had a string of trusty lieutenants by his side, and it was this role that Williams took on for the reunion. It’s no great leap of the imagination to grasp that someone blessed with talent as a singer and songwriter in their own right would struggle in a right hand man role over time. Suffice to say that Williams put out his second solo album, the corking Roughnecks and Roustabouts, last year, and when Dexys released their new LP earlier this month, Williams was no longer involved

Williams’ solo gigs are already spoken of in awed tones by those who’ve witnessed them. Tonight’s intimate, fired-up show at Gullivers in Manchester makes it clear why. He gives it his all, and he’s a highly gifted performer. In the flesh Williams is unassuming and charming, with a quiet star quality. His warm, honeyed voice and his guitar playing are more than enough to hold an audience. His band, too, is as tight as a nut, blazing away one minute, stopping on a sixpence the next. It’s an oak-soaked, somehow pre-rock sound, propulsive and garlanded with sweet harmonies. You get the impression that Sam Phillips would have given himself the rest of the day off if he’d discovered this lot. It’s little wonder that Richard Hawley has declared himself a fan.

Williams’ songs, delivered here with persuasive gusto and aplomb, are often soulful and reflective. Valda looks back to his childhood in Birmingham, First Real Job to his days working in a factory and the rollicking People to a mis-spent youth spent touring in bands. In particular, Are You Listening? reflects on his relationship with his father in a manner that’s immensely touching without becoming saccharine. There are love songs too, such as Nothing’s Going to Stand in Our Way and show opener Breathe My Love, and they’re tender and winning, never dewy-eyed, instead displaying a touch of grit. If you’re asking, his songs don’t really sound like Dexys as such, but their open-heartedness, hard-won wisdom and old-school tunefulness would undoubtedly appeal to a similar crowd. 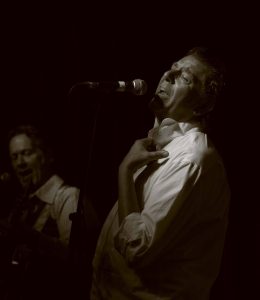 This certainly isn’t any half-baked solo career – it’s a gifted artist with his own fine, mature songs to sing. Really, Dexys’ loss is the wider world’s gain, and it’s high time the wider world sat up and took notice.

A new addition for the wall at Northern Soul Towers. pic.twitter.com/TXByiCZe8x