In my three years as Gaming Editor for Northern Soul, I have visited a variety of retro arcade clubs and bars. But nothing prepared me for the living, breathing exhibition at Manchester’s Science and Industry Museum.

Set in the historic 1830s warehouse building, Power Up is a unique curation of gaming history currently delighting young and old. Approaching it from a distinctly ‘old’ perspective, I arrived at an adults-only evening session not quite knowing what to expect but eagerly anticipating something special given the event is back by public demand.

Accessed through a brick tunnel and metal staircase, this interactive exhibit stands in sharp relief to its surroundings; banks of monitors and televisions casting a contemporary glow over the archaic industrial brickwork alcoves and beams.

What sets Power Up apart from the current glut of retro gaming experiences is that it represents a love letter to the entire history of gaming. A significant aspect of the exhibition is a fascinating display set out in chronological order, allowing you to play every significant hardware release in almost four decades, from the pioneering home computers of the early 80s to the latest generation of consoles. While playability is key, the exhibition provides a constant reminder that you are actually in a museum rather than a gaming paradise, offering a fascinating summary above each machine which affords players an insight into the triumphs and failures that litter the bumpy road to industry success. 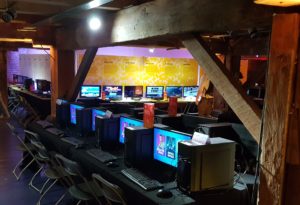 There are some superb antiquities available to play, such as 1982’s Vectrex which used only vector graphics, its tiny monitor and inbuilt console emitting a vague aura of steampunk gone wrong. Sitting further down the gallery was the Philips CDi which fell by the wayside in the early 90s and was described by Bill Gates as both a “terrible games machine and a terrible PC”. A quick session on the console’s rancid Hotel Mario confirmed Bill had a semblance of knowledge on the subject. 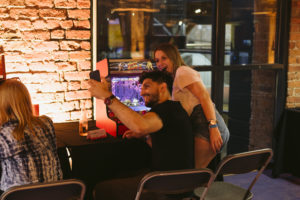 While many have dipped a toe into old-school gaming via an emulator, there is simply no substitute for holding a 35-year-old joystick in your hand (ahem). The delight from those in attendance was palpable, whether re-familiarising themselves with a Spectrum keyboard to take on the fiendish Manic Minor or battling each other at Pong on a Binatone TV Master, the orange console which kicked off the home videogame revolution in 1981. Indeed, this most venerable of gaming machines provides a neat reminder of how the simplest pleasures can often be just as worthy as the biggest and most expensive, with much shouting and laughter coming from the early 80s corner of the room. 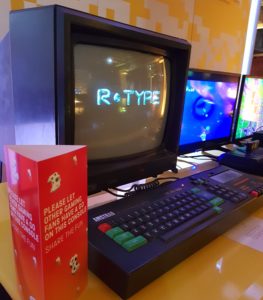 Even the most patience-shredding elements of early tape-based home computers – load times and system crashes – were met with glee here. At one point the Amstrad 464 showcasing side-scrolling shooter R-Type (itself the subject of much rage-induced joystick damage back in the day) bit the bullet and had to be restarted by a member of staff. We were reliably informed that the load time was substantial, and the familiar data screech which battered my ears for so many hours as a kid really brought home how old this piece of kit was, and how times have changed in an age of instant gratification.

However, this isn’t just an experience for old farts to reminisce upon. Power Up provides something for everybody. There are several VR setups, a whole row of PCs loaded with Minecraft just waiting for a throng of kids to descend during the day, and a superb set of bartop arcade machines where cries of ‘ave it’ could be heard from a couple of friends playing Street Fighter 2, already well-oiled from the bar tucked in the corner. And that’s just the start. 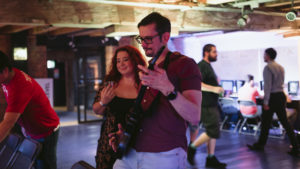 Whether you’re looking for something different to entertain the kids in the final stretch of the school holidays or fancy an evening reliving your own childhood with a few beers, Power Up is an inimitable summer event showcasing the magical evolution of an entertainment form now loved and taken for granted by countless millions.

Power Up runs until September 1, 2019 with an adults-only session on August 21. Further details can be found here.

Whatever your gaming preference, Chris recommends getting to the venue early in the session in order to beat the crowds, giving you first dibs on the more popular machines.