There are two stars of this Everyman production of Anthony Burgess’s cult novel, A Clockwork Orange. One is George Caple, who flings himself into the role of anti-hero Alex, by turns sinister and pathetic, snarling and snivelling. The other is the set, designed by Molly Lacey Davies and Jocelyn Meall. A minimalist white cube – open-sided and yet somehow claustrophobic – with trapdoors, rising platforms and slides that make the most of the Everyman’s clever new stage to create a multi-levelled, futuristic playground/prison. 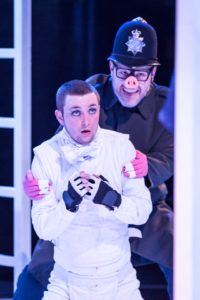 A third star – or at least object of intrigue, for fans of the 1962 book of Stanley Kubrick’s movie version – must be Burgess’s own stage adaptation, written in 1986, 24 years after the novel he apparently rattled off in three weeks flat. The songs Burgess wrote to feature in the theatrical version – strangely sinister cabaret-style numbers in the main – are here performed professionally for the first time in the UK.

In the ultraviolet semi-dark of the first half, Alex and his gang of droogs embark upon a rapid-fire series of outrages; their Nadsat dialect sometimes hard to comprehend but the mood of ultra-violent rampage clearly conveyed. Here, Alex is imperious, menacing and dominant. But punishment awaits, and the ringmaster becomes circus animal, a spectacle to be wheeled out by government ministers and a state that wants to quash crime but also free thought. Suddenly we feel almost sorry for him – even his beloved Beethoven, whose music has infused the show along with Burgess’s – has been stripped from him. Maybe he’s not so bad, just a rebellious, misunderstood youth? And then full circle, almost. The audience, like Alex, has been toyed with.

Nick Bagnall’s production rattles along – the whole thing is two hours including an interval – and infuses the narrative with contemporary references about crime, punishment and personal freedom. The Minister of the Interior (a comic Keddy Sutton) doesn’t quite say ‘tough on crime, tough on the causes of crime’ but she isn’t far off, and the treatment of human beings as numbers, bottlenecks in the system to be shifted at all costs feels sadly resonant in this week of Windrush. 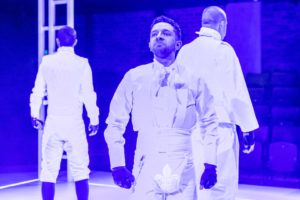 Occasionally the references are a tad clunky – the appearance of a balaclava-wearing Jimmy Savile in prison gets a laugh but is oddly distracting – but overall, this is an atmospheric, unsettling and immensely engaging endeavour. A stark contrast to the Everyman’s last offering, Paint Your Wagon, but the company felt far more at home in this dystopian vision than the whip-crackingly superficial plains of the West.

A Clockwork Orange is at the Everyman Theatre in Liverpool, until July 12, 2018.

Thought for the Day: “Christmas is built upon a beautiful and intentional paradox; that the birth of the homeless should be celebrated in every home.” ― G.K. Chesterton