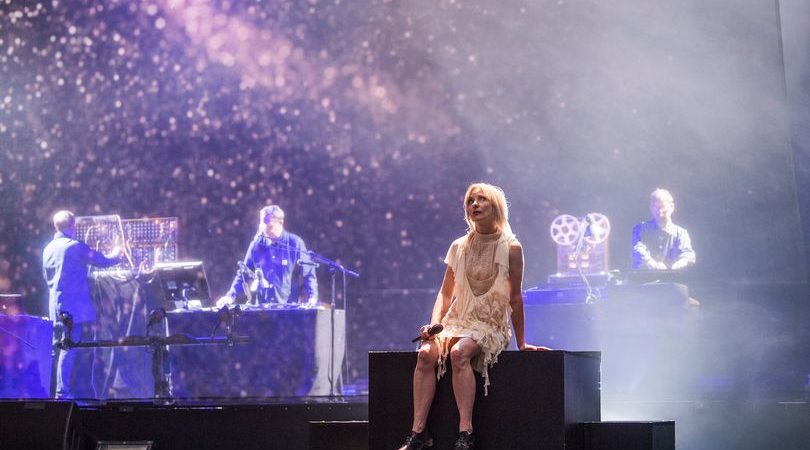 Upper Campfield Market in Manchester’s Castlefield is a great space. Built in 1882, it was a market hall for many years but is now a huge empty shell used occasionally for concerts and exhibitions. Manchester International Festival uses it regularly, and this year it hosts Cotton Panic!, what we in the 1960s used to call a mixed-media event, exploring themes from the collapse of the cotton trade in 1861 which devastated Manchester’s economy.

The media takes the form of a concert by Wrangler, a three-man supergroup who line up on stage like Kraftwerk but with a bit more kit; a performance by Jane Horrocks who narrates, sings and dances; Lorena Randi, a choreographer and dancer who does amazing things in clogs; and three video screens. Wrangler, Horrocks, and writer Nick Vivian are credited as co-creators, and the director is Wils Wilson. Wilson’s website says her interest is primarily ‘exploration of the relationship between audience and performer, space, story and experience’. She certainly does that here. 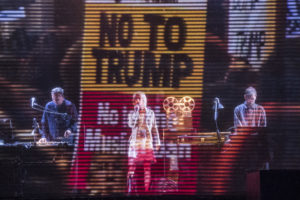 Wrangler – Stephen Mallinder formerly of Cabaret Voltaire and lots of other bands, Phil Winter and Ben Edwards – are the stars of the show. Their website says they work exclusively in analogue electronic music, and their music is the predominant feature. From the moment you enter the market there’s a deep bass tone permeating the space, and they play throughout, both driving and reflecting the rest of the content.

The story is that of the collapse of the cotton trade which was caused by the embargo on the export of raw cotton during the American Civil War, first by the Confederates and then by the Union. Despite the cotton embargo bringing financial and physical misery to the mill workers of Lancashire and the High Peak, they continued to support the abolition of slavery in the US, and did so at a meeting in 1862 when a declaration of support was drawn up.

Actually it was a lot more complicated than that – the seeds of the recession were sewn much earlier by the overproduction of cotton goods, and by 1861 the warehouses were full of unsold cloth. Once the embargo was in place, the situation was made worse by cotton merchants keeping bales in their warehouses waiting for the price to rise. Many mill owners and others in the trade supported the Confederacy, which claimed there was as much support for their cause in Liverpool and Manchester as there was in the American South.

Laid off from the mills, the workers rapidly became destitute, and their misery, narrated here on video by Glenda Jackson, was very real. They had gone from being the best paid in the country to complete poverty and had to be supported under the Poor Law. But to qualify for that, in the Victorian mind, you had to be doing something useful. Classes were set up and thousands of workers learnt new skills, but that wasn’t enough. In 1864, the government passed a law allowing Manchester and other cotton towns to borrow money for public works, which put many to work and created much of the landscaping, parks, roads and sewerage systems we enjoy today. By 1864, a year before the Civil War ended, cotton had started arriving in quantity, and the mills started working again, although in new ways. However, thousands had died and thousands had emigrated.

The Cotton Panic! experience is largely impressionistic, and some of the imagery remains very vivid. The opening video of the air filled with cotton filaments and the band creating the noise of the looms takes your imagination straight to the conditions in the mills during the boom. Then there’s Randi’s unforgettable clog dancing, Horrocks singing and wading through the crowd asking for help, Jackson’s account of the living conditions of the newly destitute, and at the end, when the mood had lightened and the band had become decidedly upbeat. I was up for a dance, I just wondered why nobody else was. 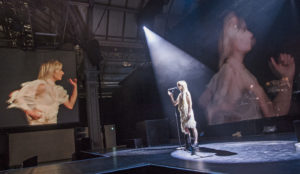 There were 500 or so of us standing in the market, and nearly all of us stayed to the end. But I felt there were longeurs, and the show could have been 20 minutes shorter. On the other hand, if you are a Wrangler fan, it probably wasn’t long enough. We kept our strength up with pork pies, Eccles Cakes with cheese, and a pint of pale from the bar.

Campfield Market is ideal for this kind of one-off event, but a search of the web suggests the council is looking for a dedicated use. I can’t think of another space like it in Manchester that would hold so many people with all the possibilities for configuration a large open space offers. I suggest the council keeps it and dedicates it to events for the pleasure and education of the people of Manchester, just like this one.