I’ve always had a bit of a thing about Kosmonaut. It was never that I disliked the joint, it was just somewhere I preferred not to go. My friends all love the place (Housemate is a huge fan), drawn to its dim lighting, stripped-back interior, good beer selection and regular DJ sets. On paper, this is all right up my street but there was something that just seemed to bug me about Kosmonaut and I could never quite put my finger on it (I used to have the same inexplicable issue with Manchester’s Dry Bar).

But one Wednesday, after an afternoon spent learning things about websites, I met my pal Mike and decided to give the Northern Quarter bar and eatery another go. Having previously been home to The Hip Hop Chip Shop (highly commended at the Northern Soul Awards 2017 for Street Food Business of the Year), Kosmonaut has returned to its own menu, Fat Tony’s.

Billed as ‘simple, high quality dishes’ it sounded like any other fare available in the Northern Quarter. Things with chips. Sandwiches. Burgers. Beer. An emphasis on the veggie-friendly certainly scored some brownie points (is it just me or is Manchester doing some brilliant stuff with veggie/vegan options recently?). So it’s safe to say I had no grand expectations.

Well, Kosmonaut, you proved me wrong. The menu is simple yet each dish sounds tasty and well thought-out. New to the extended menu are small plates such as Fried Cauliflower (£4), Hot Wings (£5), BBQ Wings (£5), Croquettes (£4), Truffle Mac & Cheese (£4) and Baked Cheese (£5). I’d not eaten since the night before and it was now 5pm so I wanted all the food in my face. I opted for the Triple Cheese (£8) – blue cheese, smoked cheddar and halloumi – served on a poppy seed roll with fries, salad and pickles. To drink, I had a tasty, cold lager – perfect for the Spring weather we finally seemed to be having. 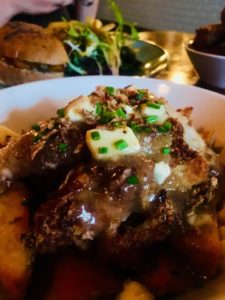 Mike chose Fried Chicken Poutine (£10) from the new poutine section – which also includes a mushroom or classic option for veggies and a steak version for the carnivores – served with thick, handmade chips, cheese curds and gravy. And because one serving of pickles is never enough, we ordered a side of fried pickles (£3).

What followed was about 15 straight minutes of appreciatively shovelling our tasty meals into our mouths and discussing how delicious they were. Not only were we impressed by the quality of the food – seriously, I reckon Kosmonaut does the yummiest fries in the city centre – but it wasn’t exactly a pricey affair. At £8 for a sandwich or £10 for a burger, it’s average for the NQ (and way better than some of the over-priced eateries in places like Spinningfields).

And the fried pickles. Fat Tony’s Fried Pickles are nothing short of ace. Tangy, crunchy and crispy – just as they should be.

“Mate, I’m going to have to pop a button,” I say to Mike before spreading out in our booth. “I don’t think I can breathe.” 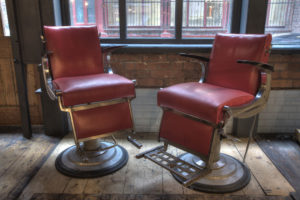 I started to like Kosmonaut like you might a friend’s new partner – they irritate you for years, hanging out with them raises a huge sigh, but then one day, as if by magic, your blinkers are lifted, and you realise that they might be okay after all. Oh no, wait. They’re fantastic. And then you feel a bit daft.

So, sorry, Kosmonaut, for the years I’ve taken you for granted. You’re a good laugh, Fat Tony’s scran is decent and you’ve got a damn fine bar. But I’m glad you turned the lights up as now I can finally see my beer.