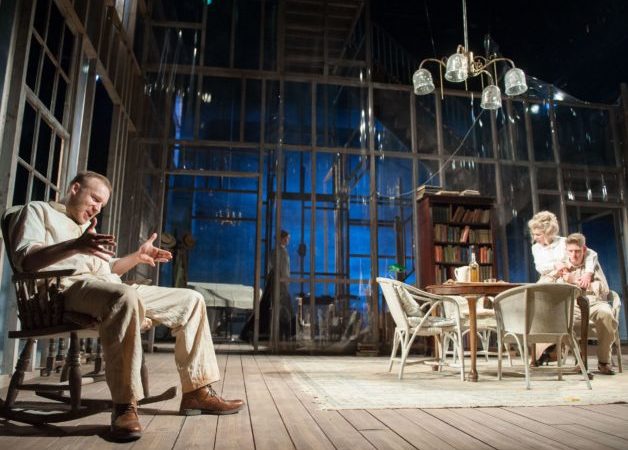 It’s now a cliché that each unhappy family is unhappy in its own way. Eugene O’Neill’s semi-autobiographical play Long Day’s Journey into Night was so close to the bone that he stipulated it not be performed until a quarter century after he died – but his widow went ahead and forced its release anyway.

By the end of the single day’s action, we know why everyone in this family of four – father, mother, two sons –  is unhappy. But O’Neill’s work, great though it is, challenges productions to find what this family’s particular ‘way’ of being unhappy is. Everybody hurts and is hurt, and most of the characters are facing a crisis point. Nonetheless, the levels of antagonism and, at times, downright viciousness between these family members prompts the question why any of them are even speaking to one another.

After a three-hour performance at Manchester’s HOME, I was still only half sure of the answer. It’s a peculiar play. It doesn’t feel too long and the journey is gripping, but it’s repetitive. Someone’s hackles go up. They go flying into someone else, studs up. A secret is touched on or revealed. Someone’s hackles go up. They reach over and twist the knife. Rinse, repeat. 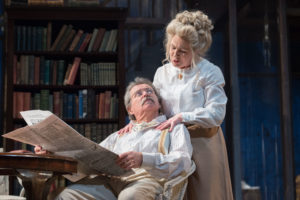 There are some fine performances. The stand-out for me was Sam Phillips as the elder son James Tyrone Jr. Phillips brings just the right combination of thuggishness, cruelty, and tenderness to the part, especially in his relationship with his younger brother Edmund. Lorn Macdonald’s performance as Edmund is also excellent. He lends a sympathetic mix of vulnerability and weak bravado to the part, and the scenes between the two later in the play are real highlights.

The patriarch James Tyrone is a more straightforward blowhard miser. George Costigan’s performance has some brilliant flashes of menace and comic flair but his James is hard to like or dislike, certainly to dislike as much as his family seem to. Bríd ní Neachtain as the mother, Mary, has perhaps the hardest task – capable of more nastiness than her husband, the plot demands she is a little fuzzier than the others and, by the end, she is about as low as you can go. If this play is a tragedy, then it is hers. 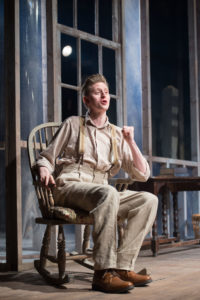 Director Dominic Hill brings the second half nicely to the boil, sensitively handling a range of solo speeches though, for me, the relationships between the characters, particularly in ensemble scenes, were a little less focused.

There’s some great acting but the production’s highest notes are often hit by its design. Tom Piper’s marvellous set takes its cue from Mary’s frequent complaint that the family does not have a real home. It’s a timber frame so that you can see the rooms behind the sitting room in which the action mostly takes place. The wooden frame is covered in clear plastic, almost as though it’s a kit which has not been properly unwrapped, and Ben Ormerod’s outstanding lighting design makes the most of its light-catching qualities to build a sense of foreboding, especially in the second half.

There is a marvellously ominous attic, visited only once. Lurking just outside the house, in a symbolic touch, are the kind of timbers you’d see at a dock, a reference to one of the many secrets which come to light during the play. You can also see characters when they are ‘offstage’. This is particularly important for Mary who in the second half of the play is continually referred to, visible to us, but not seen by the characters. Composer Claire McKenzie and sound designer Matt Padden also do a fine job in punctuating the action and providing, at times, a layer of almost Gothic menace.

It’s an enjoyable production, brilliantly designed, with a couple of misfires – good, but in its own way, you might say.

Long Day’s Journey into Night is at Manchester’s HOME until May 26, 2018. For more information, or to book tickets, visit the website.