George Orwell had relatively little comment on the subject of the visual arts save to say that he didn’t much care for Salvador Dali whose autobiography he described as “simply a strip-tease act conducted in pink limelight”.

He did, however, have a great deal to say about truth and, without truth, art is worthless in any meaningful sense. It is this single-minded commitment to the truth that lies behind a fascinating new exhibition, Room 103: a tribute to George Orwell, at the Saul Hay Gallery in Castlefield, Manchester.

I asked artist Glenn Ibbitson, curator of the exhibition, where his love of Orwell and the idea for the exhibition had come from. “The freedom of the individual to think for themselves, free from State interference, is the founding principle of Orwell’s writings and maybe this is why so many visual artists identify with his work. Orwell has been with me since school where, thankfully, Animal Farm was a set text. It’s interesting that somehow a fashionable backlash against Orwell has never really taken off and his ideas have consistently appealed to successive generations.”

He continues: “Over the last year or so I’ve been engaged in more and more discussions about Orwell and the prescience of his work. I decided to test the waters and proposed a tribute to him which investigated ‘Orwellian’ themes in their broadest sense and that initially took the form of an online blog. Slowly, more and more artists came on board and when I met Ian Hay the idea of an actual physical exhibition really began to take shape.

“In many ways, Orwell is a visual writer. I’m thinking here of such vividly described scenes as the one in The Road to Wigan Pier in which he describes, from a train, seeing a young working class woman trying to unblock a drain. Or the image of a condemned man being led to the hangman in a Burmese prison, skipping to avoid walking in puddles on the exercise yard.”

One of Ibbitson’s own pieces, Target Pinned to Wall, is arguably one of the most striking imagines in the exhibition. A nude male figure is held in place by a sinister black bullseye, disfiguring the natural beauty of the human body and robbing the viewer of seeing that most humanising of features, the eyes. The coldness of the image, the fragility of the subject’s situation, are rightly unsettling. 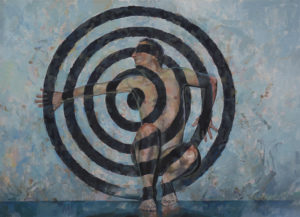 Elsewhere there are a number of arresting images from Tony Baker’s book, Homage to Homage to Catalonia. Baker is an artist whose works span disciplines, and his book is a series of some 297 images that contrast the Catalonia that Orwell described in his seminal work on the Spanish Civil War with the situation Baker found there amid the chaos of the 2017 Independence Referendum.

His image Blasphemy is a remarkable one, encapsulating and contrasting many of the competing forces in contemporary Catalonia; the depth of Catholic Spain, the unruly influence of the application of anarchy and the base appeal of good old fashioned Anglo-Saxon invective. Had it been captured in black and white, we might well have believed it a lost artefact from Orwell’s own time. 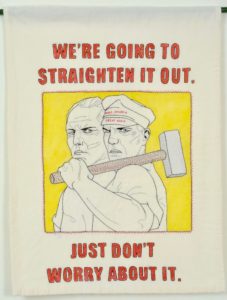 The exhibition also features a number of textile works from the American artist Mary Mazziotti. Since 2016, much of Mazziotti’s work has, by her own admission, been in reaction to the 2016 US Presidential Election. Here we see an artist in full command of her craft, determined to deploy it in the service of the truth as she sees it. Mazziotti’s tapestries, Needling the Regime, are clever references to the agitprop of dead dictatorships. There is something subtly subversive about the juxtaposition of these neo-Soviet Realist images with the softer, almost comforting colours on display in this more traditionally feminine and very American artistic textile tradition. One does not need to share her truth to recognise its sincerity, a quality of which Orwell would surely have approved.

There is much of interest in this provocative and thoughtful exhibition for both lovers of contemporary art and the works of George Orwell and, dare I say it, for those of us who love both.