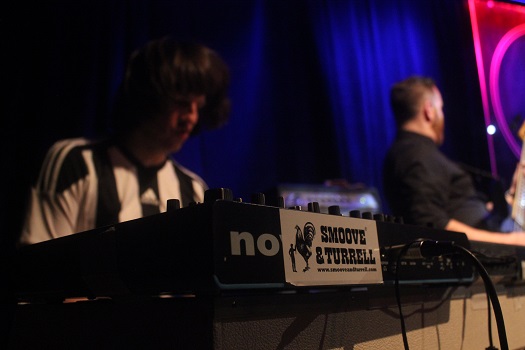 It’s a bit chilly at Manchester’s Band on the Wall. As I arrive early to set up my camera, it feels like the empty room has a faint draught running through it. I think it’s probably just me, though. It’s freezing outside and Smoove & Turrell’s venue this evening is much bigger than I was expecting. Indeed, that imaginary draught quickly evaporates once 7 pm comes around and the room starts to fill up at an impressive rate. By the time Smoove & Turrell make their entrance on stage, the room is packed to the rafters.

Tonight, if you’re between the ages of 18 and 40 then your mum is in the crowd. It’s a statistical fact. If you’re from the North, your mum is here, with your dad, and they are loving every second. They’re waving their arms in the air like they just don’t care and getting merrily tanked. As the evening wears on and the band’s guitarists start hammering out the solos, your parents start doing those dance moves that you swore to them they must never do in public, at least if they still want to visit this Christmas. Maybe your mum is among the fluid circles of women laughing and hugging and dancing, or your dad is deep in the clusters of men roaring and clapping each other on the back and emitting the low rumbles in the deep that are the universally recognised sounds of Dads Getting Bevvied at Gigs. Or maybe they’re together somewhere, with your dad’s arms wrapped around the front of your mum’s waist as they sway gently to the music while belting their hearts out to Will You Be Mine. 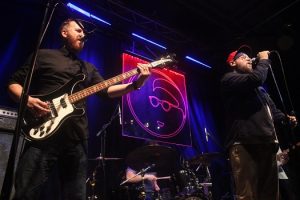 Hey, maybe you’re here with them. Perhaps you’re the one watching your mum surge to the front of the stage. A gracious John Turrell shakes her hand and you’re the lady next to me who has to shout “Mum! Let him sing!” when for an awful second it looks like she’s not going to let go.

Having seen them perform twice now, I believe there’s a serious argument to be made for every member of Smoove & Turrell to be a Northern sex symbol. But sex symbols with a decidedly distinct vibe. The woman mentioned above is fairly typical of most of the audience, in that while looking earnestly into Turrell’s eyes she isn’t saying “I will not let you go until you are sitting in the taxi with me” so much as, on behalf of the crowd, “your music makes me and/or my husband/wife/friend very happy and I cannot permit you and your band mates to leave this stage until I am satisfied you’re all fully aware of that”.

Between the songs I’m quickly learning to know and love, such as I Can’t Give You Up and Hard Work, Smoove & Turrell take every opportunity to engage the audience. My favourite example of Northern community spirit is exemplified in Turrell taking a breather to discuss a recent event in a pie shop.

“And what did he have in his?” He points at the keyboardist, Mike Porter, who looks like he knows what’s coming. “Broccoli, and I think beans.” There is a gasp of horror from the crowd. “I know, I know!” Turrell continues, nodding incredulously. “And you know what? What was the gravy, Smoove – onion, was it? Didn’t even have proper meat gravy.” 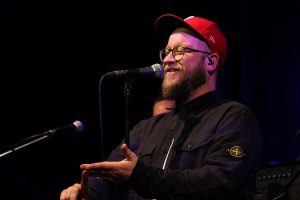 Smoove & Turrell are about as sweary as your average band, but there’s a real wholesome, innocent kind of loving vibe that descends on their gigs like sunshine on a summer’s day. “We want people to dance,” they tell their audience, and the latter oblige with gusto. These events are the kind of places I’d happily bring my hypothetical children, were it not for the late hour, the alcohol and the fact that Mummy and Auntie Becky will send them flying four times before the halfway mark.

If you weren’t at the gig, there’s still an opportunity to see the band on tour. And you should buy their albums. As I first learned at the Ramsbottom Festival, the music of Smoove & Turrell is funky, irreverent and endlessly addictive. But most important of all, their live gigs are cheerfully inclusive; throughout the night, I felt like a truly welcome part of their audience. And speaking purely personally, that’s what makes them one of my best music finds of the year.

Words and images by Jack Stocker 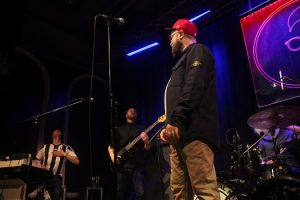