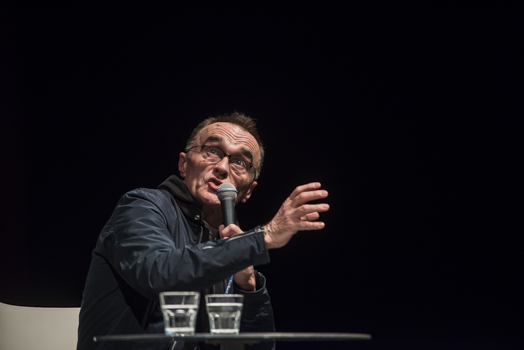 It beggars belief but it was 20 years ago that Danny Boyle and his team introduced a special preview screening of Trainspotting to a sold-out crowd at Manchester’s Cornerhouse.

Today, Cornerhouse’s Cinema 1 is an empty building that is slowly going mouldy and Boyle is an active patron of the organisation’s new venue, HOME. Tonight’s event fills up HOME’s main three cinema screens and its biggest theatre space. Back in 1996 when Danny Boyle came to Cornerhouse to introduce the first film, a good proportion of tonight’s audience would have been sleeping in nappies. Time marches on.

In fact, that’s the key theme of T2: Trainspotting (by the way, what’s with that daft title; it manages simultaneously to be not quite Trainspotting 2 and not quite anything else). It’s been 20 long years since Renton (Ewan McGregor) double-crossed his friends and absconded with a sports bag full of cash. Now he’s decided it’s time that he caught up with them again, though they may not feel quite the same. Soon enough, though, we’re back to the adventures and machinations of Renton, Sick Boy (Jonny Lee Miller), Spud (Ewen Bremner) and Begbie (Robert Carlyle), only this time against the backdrop of a thoroughly modern-day Edinburgh. 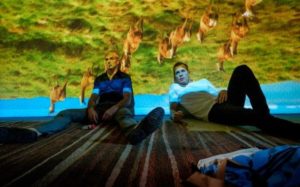 Usually it would feel cheap and unfair to judge a sequel directly against the original, but T2 is at great pains to link itself back to Trainspotting, revisiting its locations, elements of its soundtrack and even incorporating some 1996 footage (there’s also a small, neat nod back to Boyle’s Shallow Grave). It doesn’t disgrace its heritage, and there is some interesting stuff going on here, but in all it never adds up to a fresh, satisfying, invigorating whole in the way that its predecessor did. Trainspotting covered a whole lot of ground, with that headline-grabbing heroin addiction being just one element. This time out, the focus is more squarely on the four old friends and what life has done to them. It’s the middle-aged comedown to a youthful high. In all, it’s a decent, if rather slight, PS to Trainspotting itself. As successful as the first film was, it’s hard to believe that this would mean anything at all to anyone who hasn’t seen it.

At times, T2 can be frustrating. There are some fine, vivid set pieces, and Boyle uses a 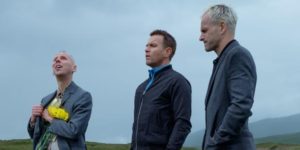 variety of film stock – from professional quality to smartphone footage – to bottle the energy of the characters. It has plenty to say about the culture and technology of 2016 and it does a handsome job of capturing the Edinburgh of today, in stark contrast to the same city in the mid-90s. But then the climax falls into using over-stylised flashy visuals cut to a pounding piece of music, a common Boyle trope.

The script gives the characters some meaty stuff to do, but too often it hinges on almighty cringing plot contrivances and coincidences. At times the story is meandering, and even a little soapy. Back as the beleaguered Spud, Ewen Bremner gives a brilliant, nuanced performance, easily stealing the show from his comrades. Then again, another fine returning actor gets just one line, consisting of all of four words. For every good decision that’s been made, there’s a plain baffling one just around the corner. 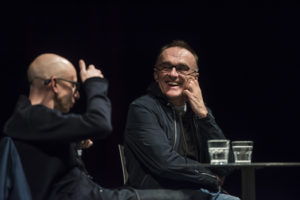 In the large-scale Q&A after the event, HOME’s artistic director for film, Jason Wood, does a sterling job of getting Boyle to pick over his creative processes for the film. Boyle’s main concern, it seems, was that the sequel should be “not shite” and “about something”. He talks about David Bowie’s behind-the-scenes assistance with the soundtrack of the first film, and the now-mended feud with Ewan McGregor. The conversation covers the many, aborted attempts to get the sequel script nailed down, and the degree to which it does or does not draw on Irvine Welsh’s own 2002 sequel novel, Porno. At present, Boyle confesses that he has no idea if a third film (please, please not T3) would ever happen. Instead, he’s considering making a TV series about the Getty family, or possibly a theatre collaboration with Frank Cottrell-Boyce for HOME. 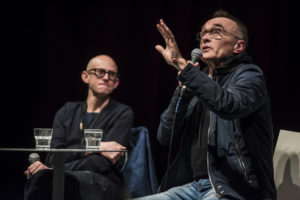 The story goes that, during the 90s, the Monty Python team considered making a belated Holy Grail sequel, all about the Knights of the Round Table struggling to get back together in the face of their own individual busy lives and conflicting opinions. In that respect, it would have mirrored their own real-life situation. It never went ahead, but it’s tempting to see T2: Trainspotting as being in the same vein.

It reflects the tricky, regretful off-screen reunion of a group of filmmakers as much as the on-screen characters. Not only is Boyle back working with McGregor again, but his fine original collaborator John Hodge returns on scriptwriting duties, and it’s hard to underestimate Hodge’s thoughtful contributions here.

T2 isn’t quite a match for the first film, then, but it is way better than anything that Boyle has made in the meantime. It is fast, funny, inventive and, in its best moments, thrilling, substantial and emotionally involving.

In short, it’s not shite.