Fran Yeoman November 26, 2018 Arts Comments Off on Review: The Lanterns at Chester Zoo

It should be an odd proposition. Go all the way to what is probably the nation’s best zoo, but don’t see any real animals. Instead, visitors to The Lanterns wander the paths and bridges of Chester Zoo in the dark, cooing not at endangered species but at radiant sculptures, illuminated butterfly puppets and copious twinkling fairy lights.

As charming as that sounds, and as much as I am a fan of the event’s organisers Wild Rumpus, I wondered in advance of our visit whether it might feel somewhat like missing the point of the venue. Would our wildlife-loving young daughters really be content to swap a genuine lion sighting for a glow-in-the-dark king of the jungle?

I needn’t have worried. The Lanterns at Chester Zoo is well worth the visit in its own right. From the moment the aforementioned daughters were handed their own mini lantern (lit by safe LED tealight) to carry around the route, they were sold. By the time four performers in glowing penguin costumes squawked We Wish you a Merry Christmas and pretended to eat fish at the Ice Kingdom finale, the girls were exhausted but entranced. 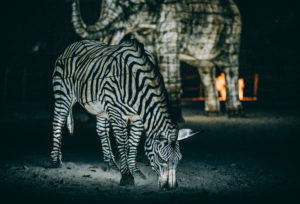 It was the latter stages, including these penguins, that really stole the show. The early installations were pleasing enough – the Moonlit Meadow featured illuminated model animals ranging from a beautifully graceful giraffe to a cheetah that looked more like an entry on the website ‘Bad Taxidermy’ – but the magic really kicked in about halfway round with the Northern Lights and Enchanted Woodland sections. 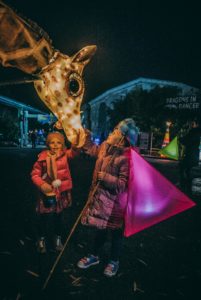 In the former, glowing reindeer roamed the walkways while Santa himself did laps in his sleigh and little helpers handed out gingerbread Christmas trees. In the woodland, a twinkling walkway gave way to towering (real) trees adorned with thin stripes of light, beautiful dancing silhouettes and swooping lantern owls. Between the two, the half-dozen stalls of a Christmas market – new for 2018 – hawked substantial outdoor fare like hog roast sandwiches (£5) and churros (£4) and a drinks tent served up hot drinks and booze to keep out the cold. While not exactly fine dining, this proved to be the best way to warm up and re-fuel before finishing our nocturnal exploration.

The beautifully-restored Oakfield House, now an upscale pub at the heart of the zoo, looked gorgeous in its Christmas finery but was sadly under-utilised for this evening event, offering only a choice of three small bites such as the beef slider we tried (£10 including a drink) that was a tantalisingly tasty but under-sized morsel. Outside the Oakfield, a snow machine had small children shrieking with laughter, and then it was back on our way for the rest of the lanterns. This isn’t a cheap evening out – tickets range from £10 to £17.50 for adults and £5 to £15 for children depending on the date, and it would be several times that if you added on daytime zoo tickets too – but for anyone who is looking for a festive family treat that isn’t the usual pantomime, the Lanterns is a charming option.

The Lanterns is at Chester Zoo until December 23rd https://lanterns.chesterzoo.org/