Invisible Britain: Portraits of Hope and Resilience is a book of stories that are rarely heard. It’s a book about people who are often marginalised in the media, neglected by politicians, and ignored within society. It’s a book about identity, injustice and inequality, and the social issues that are affecting millions of people across the UK. Most importantly, it’s a book about how people have found hope among the ruins and survived through difficult times.

The idea for the book arose from a documentary I co-directed in 2015. Sleaford Mods – Invisible Britain followed the Nottingham band Sleaford Mods on tour in the run-up to the 2015 General Election, visiting some of the neglected, broken-down and boarded-up parts of the UK that many people prefer to ignore. In each town or city, we met with local people and asked how unpopular government policies had changed their areas and what, if anything, they were doing to resist them. To describe the people we met as ‘ordinary’ is to do them a disservice, given the extraordinary efforts they had taken to protect and preserve their communities. From Stockton-on-Tees to Southampton, Barnsley, Lincoln and many other neglected pockets of the UK, what we saw wasn’t ‘Broken Britain’, but rather the front line of nationwide resistance. 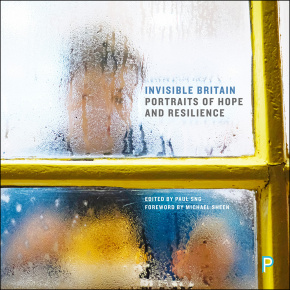 In December 2016 I started to think about how a book of portraits and stories might serve as a vehicle for people whose lives have been blighted by government failures and neglect – and how this book might allow them to have their say. The idea was developed to focus on people affected by social issues including austerity, de-industrialisation, housing, welfare cuts, and the rise in nationalism and xenophobia. In consideration of John Grierson’s formulation that documentary is ‘the creative treatment of actuality’, each story is told by each person in their own voice; less ethnography and more direct testimony.

Invisible Britain isn’t designed to be a comprehensive and definitive representation of modern Britain, but rather a snapshot. We avoided going for sensationalist tales, instead focusing on the politics that occur in people’s daily lives and their hopes for the future. Many of these stories are from individuals who have been affected by the decisions made by politicians so we felt it was important to include a range of political views, including some that I personally don’t share. We also wanted to include new and emerging photographers alongside those already established in documentary photography.

The book is intended to be the first step towards setting up a platform that will work with under-represented individuals and communities to amplify their voices and help enable them to tell their stories in the arts and media. The platform will also run workshops on the creative arts, a mentoring scheme, and provide practical support and advice regarding creative opportunities, as well as offering paid work placements on film and television productions. It’s in very early development, but I’m hopeful we can do something to make the arts and media more inclusive of people whose voices aren’t heard often enough.

By Paul Sng, Director and Producer of Invisible Britain

Main image: Lubecki Family: Monika, Agata and Wieslaw in their home of four years in Edinburgh

Invisible Britain: Portraits of Hope and Resilience is published by Policy Press on November 1, 2018. Editor Paul Sng will be touring the book with a series of Q&As and screenings of the film that helped to inspire the book, Sleaford Mods – Invisible Britain, from November 1-10, 2018. Dates and details via www.invisiblebritain.com