Review: The Tiger Who Came to Tea and the adventures of Mog the Forgetful Cat, Z-arts, Manchester

Helen Nugent June 9, 2021 Arts, Northern Soul writes..., We burn witches Comments Off on Review: The Tiger Who Came to Tea and the adventures of Mog the Forgetful Cat, Z-arts, Manchester 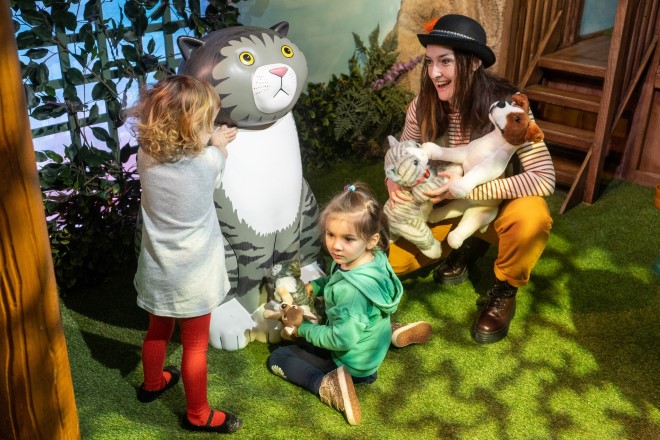 As I looked at the oversized cat flap, built to let children into Mog the Forgetful Cat’s world, I let out a sigh. The child in me, the girl who absolutely loved cuddly Mog and went on to own cats of her own, was desperate to crawl through said cat flap. The adult, the Aunty who had brought her niece to Z-Arts’ exhibition, had visions of a tannoy screeching “middle-aged woman stuck in cat flap, middle-aged woman stuck in cat flap” echoing throughout the building.

And so I demurred, allowing my niece to scramble though Mog’s entrance and go on to embrace a rather brilliant evocation of Judith Kerr’s book. It’s a brave endeavour, taking on a beloved character and, to some degree, reinterpreting said character’s world for the most discerning of audiences: children. But Z-arts, based in Manchester’s Hulme, has done it. And done it with bells on. As my niece, Scout, said of the cat flap experience: “I felt like a pussycat although it was too big for a cat and too small for me.”

But before the glamour of the cat flap, we began with reservations for ‘a rug’ (cue Aunty Helen’s fears that she would never haul herself off said rug), followed by an entirely charming rendition of The Tiger Who Came to Tea, and a subsequent free-for-all in the various rooms of Mog, Katinka, and The Crocodile Under the Bed. But Mog was the star, and rightly so. I mean, there was a giant Mog all ready for photos with little-uns. If I don’t get to Aunty heaven on the strength of that alone, there is no God.

So, for around 40 minutes after the tiger had come to tea, we busied ourselves in the town that Mog built. And it was glorious. As a grown-up, I was especially pleased to learn that, once upon a time, there was a real Mog. A Mog who sat on Kerr’s knee as she wrote, who resolutely refused to use the cat flap back into the house, and who adored boiled eggs.

As for the never-ending appeal of Mog, I bow to a superior knowledge. “Scout, what makes Mog so special?”

“Because she’s a cat. She looks fluffy, she likes Debbie and I pretend sometimes that Mog is my cat Tinkerbelle and my cat Mitsy and I am Debbie.”

All images by Lizzie Henshaw

The Tiger Who Came to Tea and The Adventures of Mog the Forgetful Cat exhibition has been extended to run until early 2022. Click here for more information or to book tickets.

This exhibition is inspired by the treasured children’s books from beloved author Judith Kerr (published by HarperCollins Children’s Books). In the only outing outside of the capital, The Tiger Who Came to Tea and The Adventures of Mog the Forgetful Cat is the latest exhibition designed and created by Discover Children’s Story Centre, Stratford and follows on from the sell-out success of A World Inside a Book: Gruffalos, Dragons and Other Creatures, based around the works of Julia Donaldson and the illustrations of Axel Scheffler.