Despite the team behind Hope Mill winning twice at last year’s Northern Soul Awards (Small Theatre of the Year and Fringe Production of the Year), I’d still not visited this Manchester theatre. It was time to put that right.

This week saw the world premiere of new musical The ToyBoy Diaries, based on the bestselling book of the same name by Wendy Salisbury. The show centres around twice-divorced Lily who finds herself in a relationship with a much younger man and “opens the door to a wild new world of inappropriate relationships”.

In a note included in the programme, director Tania Azevedo explains that she was attracted to the script because Lily isn’t simply a ‘wife’ or ‘mother’ and refuses to be labelled as such.

While this is explored throughout the play – the intimate space at Hope Mill is perfect for this type of production where the lead talks directly to the audience – it feels at odds with the current conversation about sexual politics and the role of women in society. Instead, the storyline bounces from one sexual encounter to another. There’s no real discussion about why, or about the double standards between men and women. 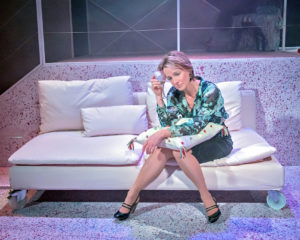 Salisbury’s book was published in 2007 so its subject matter is fairly dated. There are ways to modernise the narrative (I mean, who places personal ads in the age of internet dating? Or leaves voicemails rather than sending messages?) but they haven’t taken the opportunity to do so.

However, doing so may mean losing some of the play’s funnier moments – like when Lily meets with a young Irish lad in a pub and is thoroughly disappointed by both his appearance and manner. There’s nothing wrong with staying true to the original text (especially since it is based on true events), but at times it’s jarring.

The cast is fantastic, and Johanne Murdock plays Lily wonderfully. It’s no easy feat to spend that amount of time on stage, sing and narrate a story. Nicola Blackman is hilarious in the role of best friend, but it’s all a bit too Mamma Mia! for me (and I loved Mamma Mia!). 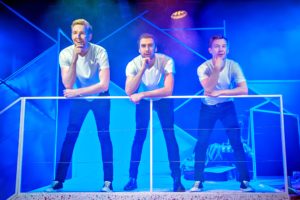 Matt Beveridge, Sharif Afifi and Alistair Higgins shine as Lily’s toyboy suitors which often sees them switching characters. Their talent is evident – they can sing, dance and act – but there are just too many scenes where Lily recounts the various fellas from her personal ads. At two hours 40 minutes, the play is far too long.

That’s not to say it isn’t good. I enjoyed the story and laughed at the smutty jokes. It’s light-hearted, frothy and funny – and an excellent way to spend a week night with a good girl pal when you need cheering up – but, about halfway into the second half, I began clock-watching.

If it was shorter, snappier and more modern, The ToyBoy Diaries would be my cup of tea.

The ToyBoy Diaries is showing at Hope Mill Theatre in Manchester until February 10, 2018. For more information or to book tickets, click here.

@VideOdysseyAhoy Good News: positive stories from across the North This week's inspiring acts include fundraising for local foodbanks, Sunday lunch from Harrogate fire station and a good dose of nostalgia and fun from Liverpool. northernsoul.me.uk/good-news-…

@supportthewalk Good News: positive stories from across the North This week's inspiring acts include fundraising for local foodbanks, Sunday lunch from Harrogate fire station and a good dose of nostalgia and fun from Liverpool. northernsoul.me.uk/good-news-…