Theatre Review: To Have To Shoot Irishmen, Everyman, Liverpool 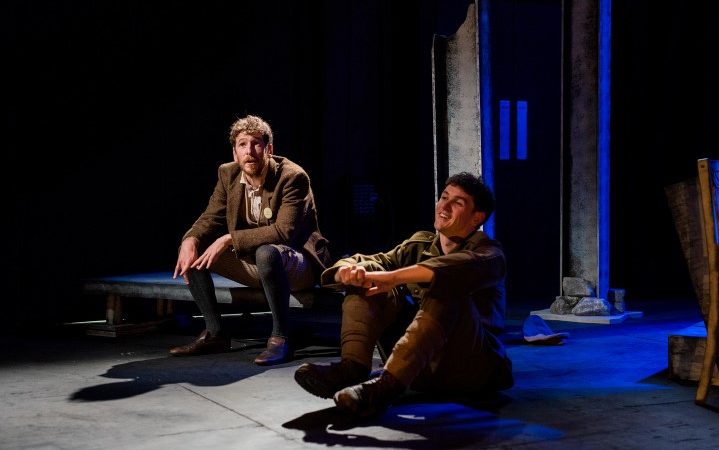 Lizzie Nunnery’s new ‘play with songs’, To Have To Shoot Irishmen, has been touring since the beginning of October. But for the Liverpool-based writer, her return to the Everyman must feel like the theatre equivalent of a European night under the Anfield lights. Half the writers, musicians and theatre-makers of Liverpool seem to be in the building, and as part of the current Liverpool Irish Festival, the place is also packed with people who know their James Connolly from their James Joyce and are ready to tell the tale.

A little background knowledge about Ireland’s Easter Rising of 1916 – when rebels in Dublin, including the aforementioned Connolly, seized the city from the British Crown – is useful, as the play does its scene-setting via atmospherics and music rather than screeds of contextual text. But even without historical footnotes, the sense of destruction and frustrated rage is immediately apparent, and before you know it, you’re knee deep in blood and rubble as you watch.

The play opens with a distraught, dusty-haired woman roaming the Dublin streets, name-checking the evocative thoroughfares as she goes, crying out in search of her husband, Frank. He’s out there somewhere, though dead or alive? We can’t tell. We assume perhaps that he’s one of the rebels and that she’s the one for whom the price of revolution is too high.

But the complexities of the generations-long conflict soon sweep the characters into a far less obvious story. Through flashbacks and forward leaps, we learn that Frank is more of a red-and-black anarchist than a green revolutionary – in spirit if not in real-world affiliation. He may want the British out, but he despairs at the means chosen to achieve it. 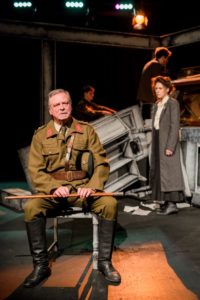 His wife, Hanna, on the other hand, has a revolutionary will as sharp as a razor. Via suffrage struggles and years of coming face-to-face with oppression, she backs the insurrection. She even counts James Connolly – the revolutionary socialist who was one of the Rising’s leaders – as a friend. When she says he gave her a cryptic forewarning that ‘something’ was about to happen, urging her to stay in the city to be part of it, Frank’s response is to despair at “the riddle of it”, that is to say, the doomed fascination with the mystery and myth of conspiracy.

Nunnery is a songwriter and poet as well as a playwright, and the dialogue in To Have To Shoot Irishmen rolls with a rich, musical quality. Poetic passages are used to bookend the piece, and beautifully sung contemporary folk songs such as Erin Go Bragh and The Blood-Stained Bandage are placed throughout the play, hinting at the ways in which myth-building turned out to be as important as street fighting in creating the Rising’s lasting legacy.

The small cast of four create a strong quartet of characters who quietly go about the business of building the atmosphere of those tumultuous times. Elinor Lawless and Gerard Kearns as Hanna and Frank are both excellent, while Robbie O’Neill and Russell Richardson play British soldiers who are genuinely human, not just foils for the rebels. O’Neill in particular, as a young Tommy keeping Frank under lock and key, sensitively combines wobbly-voiced bravado with a pair of wounded, terrified eyes.

Moments of tension and calm are underlined effectively using original music and sound by Vidar Norheim and Nunnery, but in the end, this is one of those plays in which you really hear the silence. It comes in the pauses between words, in the anticipation of a moment of truth, and when it hits you, it’s with an emptiness that’s almost deafening.

To Have To Shoot Irishmen is at the Everyman Theatre, Liverpool, until October 27, 2018, then on tour including Edge Hill University, Ormskirk, on November 6, 2018. For more information, click here.