Theatre, war and a satirical newspaper: Ian Hislop and Nick Newman talk about The Wipers Times

The Wipers Times, coming to Manchester Opera House at the end of October, tells the extraordinary true story of a satirical newspaper created in the midst of the mud and murderous mayhem of the Somme at the height of the First World War.

In a bombed-out building in the Belgian town of Ypres (mispronounced ‘Wipers’ by British soldiers), two officers, Captain Fred Roberts and Lieutenant Jack Pearson, discovered a printing press and decided to create a newspaper for the troops. Far from being a sombre journal about life in the trenches, where life expectancy could be measured in minutes, they resolved instead to produce a cheerful, subversive and joke-filled newspaper designed to lift the spirits of the men on the front line. It was an immediate success among the troops, defying enemy bombardment, gas attacks and the inevitable disapproval of many of the top brass (some of whom referred to the two as “Lenin and Trotsky”) for the two years and 23 issues of its publication.

“I think Pearson and Roberts just thought, ‘this is our resistance, we are not going to be cowed, we are not going to spend the whole time whimpering and saying isn’t it awful, we are going to laugh at it,’ which I think is a particular sort of heroism,” observes writer, broadcaster and Private Eye editor Ian Hislop, who came across the story while researching another documentary about the First World War. He admits that, when he first tracked it down, he couldn’t quite believe what he was reading.

“I thought I knew a bit about the First World War, and about satire, but I had never heard of it although I kept coming across fleeting references to it. Then I actually saw the paper and it was a revelation. I thought, ‘this is incredibly funny, surely they can’t have produced this during the war?’.

“It’s bang, straight in, very, very modern and a lot of it is pretty bad taste. They loved the Music Hall, so they are endlessly doing fake Music Hall adverts for shows called Over the Top. You read a review and it says, ‘It’s a gas!’. Roberts himself was gassed in 1916 and he was writing jokes about it. There was nothing they considered off-limits.” 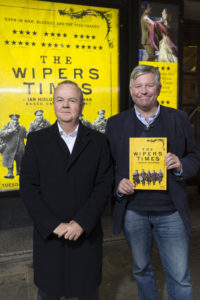 Hislop continues: “The history of the First World War still tends to be filtered through English public schoolboys and most of the people who fought in the war were not like them. They weren’t writing poems in Latin or novels in 1930, after thinking about it for 10 years. This is what they wrote when they were there.”

Hislop’s co-writer and long-time buddy Nick Newman, who has worked with the satirist on Private Eye and Spitting Image, agrees. “History really comes alive when you’re reading the original sources, not something that comes from years later. This was something that struck us both as truly remarkable, an extraordinary tribute to the resilience of the human spirit in the face of overwhelming adversity.

“We thought ‘why doesn’t everybody know about this? It’s a brilliant story.’ We spent a good part of a decade trying to persuade anyone else of that,” he laughs ruefully.”

Hislop adds: “They all said nobody was interested in the First World War. Then, after War Horse and Birdsong were successful, that changed to ‘it’s all been done’.

“But we carried on and decided to write it as a play. In the middle of writing it as a play, our A4 sheet of paper finally landed on the desk of the head of history at the BBC so we actually did get a commission for a TV historical documentary. That was marvellous, but we still felt it could be more interesting as a stage drama with music, songs and lots of jokes.”

The pair decided that the stage version should reflect the way The Wipers Times’ writers (many of whom remain anonymous to this day) loved Music Hall.

“So, we took some of the better poetry and turned that into songs with music of the period,” explains Newman.

“Then we had to kind of backward engineer it, thinking about how and why they would come to write a piece about optimism” says Hislop. “We wanted to make the magazine the star of the show but in order to do that you have to tell the story of Pearson and Roberts. We were very lucky that the relatives we managed to contact gave us snippets of biography and details, so we managed to patch together the lives of our heroes and the magazine itself. We’ve done a lot of shaping but it’s a tribute to their sense of humour. That’s where all the jokes are from.”

“It may be a failure of imagination, but all the best bits are taken from history,” laughs Newman. “All the incidents in the play happened, even the most unlikely ones. Churchill really did appear in the trench next to them. There really was a spy called Madame Fifi who ran a café.”

Clearly, the pair remain immensely attached to the show and proud of their part in finally telling such a remarkable – but largely forgotten – tale of heroism and humour. 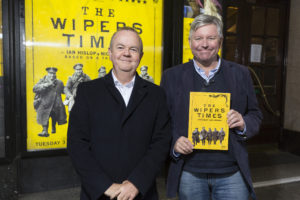 Despite his flinty image, I swear I catch a tear in Hislop’s eye as he tells me: “The pair of us being invited to be part of the Passchendaele Centenary was an unbelievable honour. We did a couple of sketches and a couple of songs from the show and then they projected the logo of The Wipers Times on the Cloth Hall, which had been destroyed in the First World War and was rebuilt brick by brick. I thought, ‘my God, if Pearson and Roberts could have seen this’.

“It is simply incredible to fill a theatre like the Opera House and hear the laughs, 100 years later, for material written in the middle of the First World War.”

The Wipers Times is at Manchester Opera House from October 31 – November 4, 2017.