Sea Life: fishy fun for all the family

Helen Nugent May 20, 2015 Arts, Museums, Northern Soul writes..., We burn witches Comments Off on Sea Life: fishy fun for all the family 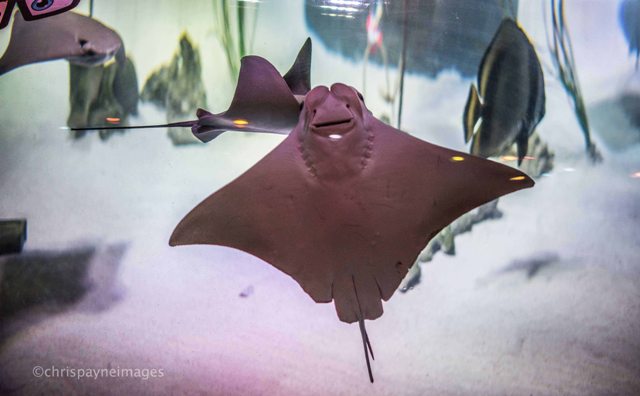 It’s good to make time for educational and life-enhancing experiences. Take Sea Life for example. With 12 centres nationwide, it knocks spots off the aquariums I visited with my Dad as a kid. At the vast Sea Life in Manchester’s Trafford Centre, you can learn lots of things – from the gender-bending talents of anthias to the life span of turtles, all fishy life is here. You can meet Theodore the albino lobster, a two-week old seahorse, and Phil the mantis shrimp (the faster puncher in the animal kingdom and named after Phil Bardsley who was caught on camera knocking out Wayne Rooney).

But the most important lesson I came away with was this: do not, under any circumstances, start the day by telling a three-year-old that Nemo lives in the aquarium. This is folly. And, if my experience is anything to go by, will result in a constant refrain of “Where’s Nemo?” until the girl’s mum and this writer’s sister is forced to spend a considerable amount of time finding Nemo (see what I’ve done there?) before embarking on any kind of fishy fun.

With Nemo found – and the adults armed with the rather unsettling knowledge that clown fish will eat anything providing they can get their chops round it – a Northern Soul posse made its way round the aquarium. Here’s what we enjoyed about the day (and a lovely photo gallery by our Head Photographer, Chris Payne).

Jack Stocker, aged 22 and three-quarters
“There was a magnificent grace to the manta rays that I found simply captivating. I could watch them looping and soaring around that same circuit for hours, especially when they momentarily pause on their sojourn to press their faces up against the glass as if wishing you a hearty hello. I was utterly unprepared for this the first time it happened, and leapt back from the tank to fall squarely on my behind. Among the laughter I looked back to find the ray with the illusion of a grin still plastered across its flat face, and I imagined it gently laughing at me as it pushed itself off again. Next time I visit Sea Life I plan to do so alone, and just sit there in front of that tank for hours, wide-eyed like a toddler.”

Chris Payne, aged 39
“My thoughts were that it was a great space, with some lovely touches – the giant Buddhist-style figurehead being a welcome alternative to the traditional shipwreck! I liked the little nooks and crannies of viewing areas, and obviously the tunnel was a great way to see these incredible creatures close up. And there were always knowledgeable staff around to give you the low-down on the more curious-looking underwater critters. The conger eel is green because of algae – not because it’s actually green. I did not know that…”

Gabe Payne, aged 5
“My favourite bit was all the big sharks, and how they swam over my head. And the chubby turtle. He was lovely! And I touched a starfish which was knobbly.”

Alfred Searls, aged 43 and a third
“For me the abiding memory will be the sight of the manta rays gliding effortlessly through the water. Everything else was either scuttling along the bottom or swimming with varying degrees of proficiency but the mantas flew through the water with a grace and elegance that must leave the other fish envious.”

Rachael May, aged 38
“I liked the tunnel the best – always my go-to in an aquarium (despite always feeling a bit edgy thanks to Jaws 3) and this one didn’t disappoint. It was fab to watch the sharks, rays and especially the majestic turtle, who as Alfred pointed out, quite clearly knew he was the star of the show. For me the play area near the end was bad news, as once my daughter Scout knew it was there, it was game over for the sea life. I really enjoyed myself though, and really liked how interactive it was for the kids, and when Scout didn’t want to stroke a starfish, I was happy to take her place.”

Scout May, aged 3
“Today I found Nemo! I saw him close up and asked my Mummy if I could take him out, but she said no. I saw lots of fish and crabs and even some sharks. But finding Nemo was the best part of my day.”

Helen Nugent, aged 41
“My niece Scout loves my Dad’s fish tank. Until recently, there were only four fish in that tank. Four fish have lived in that tank for years. Then, out of nowhere, another fish appeared in the tank. So, there’s more to fish than meets the eye. Sea Life may be on a bigger scale than Grandad Nugent’s tank but, to a toddler and to an adult, it’s a brilliant way to spend a day. Yes, it’s expensive but there’s plenty to see and do. I loved the minuscule baby seahorse (just one inch in length) who has to be fed three times a day. I was fascinated by the eel and its prehistoric look, and I was enchanted by the albino lobster – apparently there’s only a one in 100 million chance of becoming an albino in the lobster world and that quirk of fate saved him from the cooking pot.”