In a new series called Hamiltonic, Northern Soul’s Gin Correspondent Robert Hamilton samples the best gin that the North has to offer and talks to the people who make it. This week, he chats to the good folk at Shed 1 Gin in Cumbria and sips a few samples.

Shed 1 Gin is distilled in a seven-foot square shed in the garden of Andy and Zoe Arnold-Bennett in Ulverston, Cumbria. During our interview, Andy tells me that he was an actor for 20 years and was looking for something “to keep him at home”. Zoe, also home from her travels as a teacher in Korea where she met Andy, was trying “compound gins such as sloe gin”.

She says: “Knowing people who brewed beer in their sheds, we decided to try distilling our own gin to get a clearer liquid. We applied for a license and started in our shed – Shed 1. Shed 2 is where we do the bottling and labelling.” 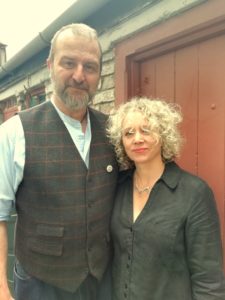 A guide to how to start your own gin is handily available on the couple’s website. After trying different recipes, they settled on three varieties: Cuckold’s Revenge, Fancy Frolic, and Giggle in the Ginnel (which is proper good – as Northern Soul is a fan of all things ginnel, this is our favourite named gin). I sipped all three straight in an afternoon of intense tasting. As Andy and Zoe say, each gin is “bold enough to be mixed, smooth enough to be sipped”. Each is infused with different botanicals to produce three different characters.

Cuckold’s Revenge (named after a character Andy played in 2016) has citrus and spice tones that warm the heart. Fancy Frolic is lighter with the summer taste of strawberry and ginger. Giggle in the Ginnel is a powerful mix of star anise, angelica, elderberry and orange zest.

Starting their business in 2016, with small batches of between 30 and 60 bottles depending on orders, they won a Great Taste 2 Star (Outstanding) Award for Cuckold’s Revenge which confirmed they were on the right track. I, too, can confirm that they produce gins full of flavour and distinction. They are developing a Festive Tipple for Christmas and a Shed Loads of Love, “a limited edition [100 bottles] sumptuous celebration of love” available in January 2019.

Andy informs me that they are looking to expand both their production and distribution, which currently extends throughout Cumbria, and are looking to break into Lancashire. He says: “It takes between three to four weeks depending on demand. We have distribution mainly within Cumbria down into the Cartmel Peninsula, but also into the Dales and outlets in Windermere and Keswick.” 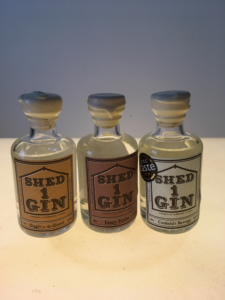 Finally, Andy tells me that, in true community spirit (forgive the pun), they have launched a Mega Gin Raffle at £5 a pop where the lucky winner receives a hamper full of Shed 1 goodies. All proceeds go to St Mary’s Hospice and Barrow (including Ulverston and Millom) Foodbank. They are both worthy causes as well as great prizes.

That’s all for now, folks. But I hope you will look forward to my next report as I continue my intrepid research from the frontiers of all things gin.