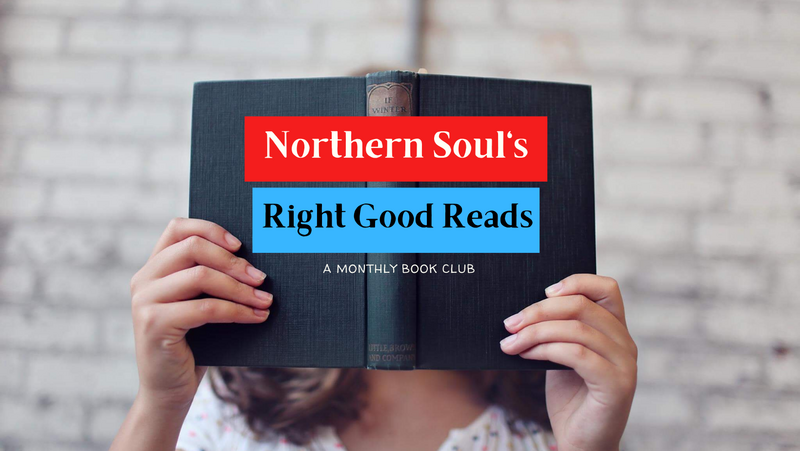 At Northern Soul, we can often be found with our nose buried in a book. As a team, we are notorious bookworms and are passionate about championing all things literary.

For some years now, we’ve been sharing our Right Good Mid-Week Read across our social media accounts. We’ve had a great response and, given how much we love reading, we’ve decided to launch a book club: Northern Soul’s Right Good Reads. Some of these books are new publications, some are titles waiting patiently on our shelves, and some are treasured favourites. Here is the second instalment of Northern Soul’s Right Good Reads to expand your ever-growing ‘To Be Read’ pile.

So, make yourself a brew, grab some biscuits (our recommendation is a dark chocolate hobnob for extra dunk-ability) and feast your peepers on these great titles. 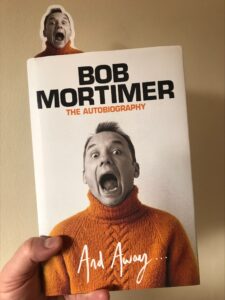 At times, Bob Mortimer’s And Away… is bitty and scattershot, particularly after Vic & Bob have hit the big time. It’s actually at its best when covering his early years, from growing up in Middlesbrough to, at one point, living and studying in Manchester. That kind of ‘how I became who I am’ material can often be the limpest part of a celebrity memoir, the slog to plough through before they make their name, but Mortimer is an established teller of a fine, vivid story. He may not emerge as a dazzling prose stylist exactly, but he acquits himself nicely. And never once does he miss a chance to demonstrate his profound love of processed meats.

At times Mortimer is self-effacing almost to a fault. More than once he describes his involvement in turning Vic Reeves’ Big Night Out into a huge comedy hit as ‘helping’. Certainly, he emerges as the world’s biggest Vic Reeves fan, seemingly happy to share the stage with him mostly because it’s the best seat in the house. Mortimer doth protest too much, though, and the sense that he’s gradually come to recognise his true worth and talent is gratifying. If you want to take an armchair psychologist’s approach to his story, it’s that of a shy and rather lonely young man who’s had sadness in his life eventually finding his calling, his happy place, namely larking about with Vic Reeves, daft wigs and odd props for a living. 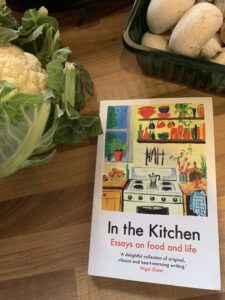 In the Kitchen: Essays on food and life (Daunt Books Publishing)

Iceland has a beautiful tradition of giving books to each other on Christmas Eve called Jolabokaflod, or ‘Christmas Book Flood’. The premise? You spend the evening reading a good book and wolfing chocolate. This custom is right up my street, so, last Christmas, my household decided to treat each other, as well as close friends and family, to our own Jolabakaflod reads.

I received In the Kitchen: Essays on food and life as my Christmas Eve 2020 treat (alongside a bar of Tony’s Chocolonely). As you can probably guess from the title, these 13 original essays are all about food and, more specifically, kitchens. It’s a brilliant read, one that covers topics such as personal histories, cultural histories, the stories we tell ourselves about the kitchen, and how we first encounter the space.

My favourite essay is A Life in Cookers by Rachel Roddy who traces her life through the ovens she has known. As someone who has moved around an awful lot, it made me think about all the kitchens in my life where Big Moments have taken place. The oven at my parents’ house where I baked myself back to sanity during a period of ill health, my best friend’s kitchen where we would spend hours drinking tea and putting the world to rights, and the (recently discarded) oven in my new home where I spent hours making elaborate curries and cakes during lockdown.

Other stand out stories include Ruby Tandoh’s Tikim Nang Tikim, Mayukh Sen’s Our Grief Books, and Yemisí Aríbisálà’s The Long and Short of the Love Affair that Imploded because of Eccles Cakes, Three-Quarters of a Quiche and Don’t-Cut-My-Leg African Chicken.

Oh, and you’ll definitely need the chocolate bar, or at least some sort of tasty snack, because these stories are guaranteed to make you feel hungry for your favourite foods. 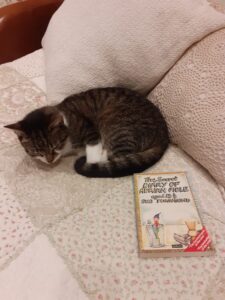 Some books stay with you for life. Although I first read The Secret Diary of Adrian Mole, aged 13¾ on March 28, 1986 (I know because I marked the event on the opening page), I can still recall various passages word-for-word. Consider this gem, which has stuck in my mind:

’10am: Woke my father up to tell him Argentina had invaded the Falklands. He shot out of bed because he thought the Falklands lay off the coast of Scotland. When I pointed out they were eight thousand miles away he got back into bed and pulled the covers over his head.’

I read Adrian Mole, I re-read it, and I read it again, laughing out loud every time and occasionally shedding a tear for Adrian, his teenage angst and endless pursuit of Pandora Braithwaite. I’m still baffled as to how Sue Townsend, who was in her 30s when the book was published, managed to portray a spotty, geeky boy on the cusp of puberty in such an expert way.

And, in a rare example of the telly box getting a book adaptation totally spot on, the 1985 series (starring Julie Walters as Adrian’s mum, Pauline) was a bit of triumph. If you can track it down on t’interweb, it’s worth watching. I’m guessing it’s stood the test of time.

Right, that’s me off to read about Adrian’s trials and tribulations for the umpteenth time. I’m relishing my reacquaintance with lines like ‘I have never seen a dead body or a female nipple. This is what comes from living in a cul de sac.’

Homegoing, the debut historical fiction novel by Ghanaian-American author Yaa Gyasi (published in 2016), had been on my TBR pile for quite some time. I’d been a little reluctant to pick it up as I’d been warned that while it was an incredibly well-written and beautiful novel, it was also extremely sad (I’m known to be a bit of a blubber when it comes to sad stories). While the cautions were correct, and it took me a few attempts to get going, I soon became absolutely absorbed in its pages. 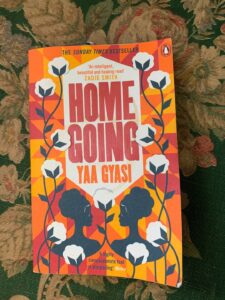 But I don’t know how to describe Homegoing. The novel had such a profound effect on me. It made me feel so many things, but I can’t seem to put these in words. This is a real testament to Gyasi’s brilliant storytelling. It was phenomenal.

Each chapter in the novel follows a different descendant of an Asante woman named Maame, starting with her two daughters, who are half-sisters, separated by circumstance: Effia marries James Collins, the British governor in charge of Cape Coast Castle, while her half-sister Esi is held captive in the dungeons below. Subsequent chapters follow their children and following generations. The story travels from Ghana to the US and shows how slavery destroyed the lives of so many people, eradicated traditions in its wake, and left an enormous impact which can still be felt today.

It’s a sprawling tale, featuring many different characters and points of view, and yet each chapter is tightly structured and (relatively) easy to follow. Occasionally, I did find myself needing to go back a few pages and connect the dots between characters.

One thing is for sure, Yaa Gyasi is a talented writer. I am currently reading her second novel, Transcendent Kingdom, which was shortlisted for the 2021 Women’s Prize for Fiction, with equal enthusiasm, delight and the same sense of indescribable awe and sadness. I urge everyone to pick up Homegoing and persevere. These are important stories. 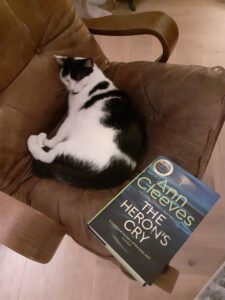 When Ann Cleeves decided to write about a new detective, she had some big shoes to fill – her own. With Vera and Shetland notching up sales that many authors can only dream of, Detective Matthew Venn, her latest anti-hero, needed to be as compelling as the irascible Vera Stanhope and as windswept as DI Jimmy Perez.

Thankfully, Cleeves’ ability to conjure a captivating policeman is as fresh and sharp as ever. Scotland and the North East are distant memories for this North Devon sleuth, now appearing in the second book of the Two Rivers series. If anything, The Heron’s Cry is better than its predecessor, The Long Call. From a rag-tag group of artists and an elaborately staged murder to a case with some uncomfortable personal connections, Venn’s second outing cements his status as a keeper.

It should also come as no surprise that the nascent series has already been committed to the small screen. This month saw Venn’s debut on ITV, coming hot on the heels of the sixth BBC outing for Shetland. As for Vera, well, you can’t switch channels without seeing Brenda Blethyn in her trademark mac and squashed green hat. I wonder if there’s something to be said for thrillers set a stone’s throw from Britain’s wild and wonderful coastline? Mmm, there’s a thought. 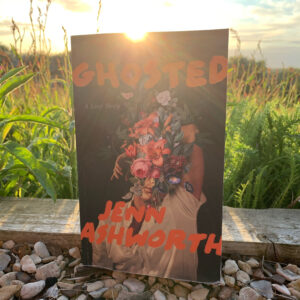 In the age of internet dating, words such as ‘orbiting’ and ‘ghosting’ have fast become a part of the collective lexicon. But in Ghosted: A Love Story, Jenn Ashworth takes the experience of being ghosted to a new, and slightly disturbing, level.

Spend enough time on the dating scene and you’re likely to come across someone who disappears into the ether. However, you might not expect this to happen years after you’ve exchanged marriage vows.

Ghosted is a novel about uncertainty. While we may believe that our lives, our relationships and our family history – the things that shape our identity – are a certain way, that they’re set in stone, something can come along and cause us to question everything.

It’s an unconventional love story, but, to me, it’s also something else entirely. Ashworth’s writing is often referred to as ‘unnerving’ and I wonder if that’s because of her immense talent for honing in on our deepest fears. In Ghosted, those who once appeared solid and who we might consider to be a part of the mundane fabric of our everyday (fathers, spouses, colleagues), hide, or begin to reveal, parts of themselves that we didn’t know existed and act in a way that we had never considered them capable of. It begs the question: how well do we – and can we – really know other people?