Steven Mackintosh: From the Muppets to Manchester 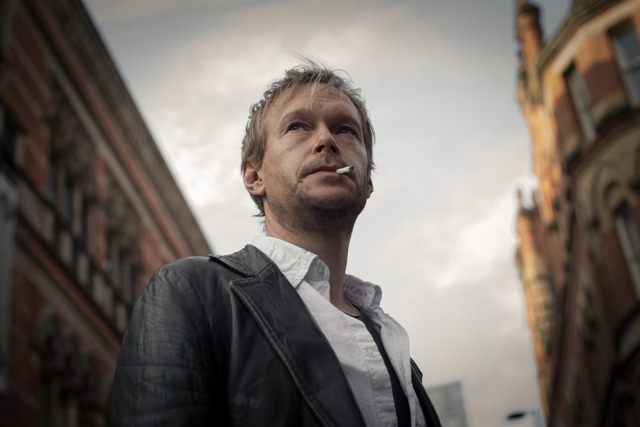 There’s a moment in the BBC1 drama From There To Here when, not long after the IRA bomb detonates and destroys Manchester city centre, the character of Robbo stands with his hands on his head, surveying the ruins.

For anyone who was in town on that bright sunny Saturday in June 1996, the scene is eerily accurate. For Steven Mackintosh who plays the feckless, likeable Robbo, filming that scene mirrored real life.

“I was shooting Prime Suspect in Manchester on the day of the bomb,” Mackintosh tells Northern Soul. “We were pretty near the Arndale Centre that day and we were evacuated by the police. So we went back to the hotel. I remember hearing that thankfully no-one had died. Then I remember standing at the police cordon later on seeing the devastation. That afternoon we watched the England/Scotland game in the bar.

“It’s utterly bizarre to read something [Peter Bowker’s script] and to have such vivid memories of that day. I knew that I had to do this [drama] by hook or by crook.”

Unlike some other actors of his generation (he is 47), Mackintosh has built a successful career making very shrewd choices. From his early appearance in The Muppet Christmas Carol (more of which later), the Cambridge-born thespian has carved out an award-winning niche as a character actor who is able to turn his hand to pretty much anything. Whether it’s playing head chemist Winston in the smash hit Lock, Stock and Two Smoking Barrels (‘Charles, get the rifle out. We’re being fucked!’), dabbling in period drama as the mysterious John Rokesmith in Charles Dickens’s Our Mutual Friend or portraying a victim of sexual abuse in the late Antonia Bird’s harrowing BBC drama Care (a BAFTA nomination followed), Mackintosh has proven his acting chops on numerous occasions. If you’re of a certain age, you may also remember him as Nigel in The Secret Diary Of Adrian Mole, Aged 13¾.

Turn the clock forward 30 years and in From Here To There, Mackintosh pulls off a number of coups: he succeeds in making Robbo everyone’s favourite bad-boy despite the fact he’s up against Philip Glenister in the hottie stakes; he delivers lines that, said by any other character, would be deemed crass and unpleasant; and, most impressive of all, he pulls off a Mancunian accent without descending into a parody of the Gallagher brothers. 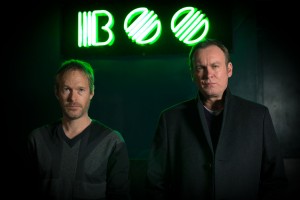 When I tell Mackintosh that his Manchester dialect is spot on (all over-enunciated vowels and strongly reminiscent of the lads I grew up with), he is pleased. “Thank you for that. I didn’t want to go too far with it. It’s a very definite sound and there’s a very specific quality to it. And Robbo left home quite early and spent much of his time as more of an urban character than his family.”

Mackintosh has got form when it comes to nailing a Manc accent. In the aforementioned Prime Suspect, he played ‘The Street’, one of the most malevolent villains ever encountered by Helen Mirren’s DCI Jane Tennison. Many of the scenes were filmed in Manchester’s Victoria Baths, a Grade II* listed Edwardian ‘water palace’ closed at the time of filming in 1996 but now open to visitors. If you saw the series (it’s Prime Suspect 5 if you want to look it up), then you’ll undoubtedly recall The Street and his habit of unleashing savage dogs in empty swimming pools to maul his victims.

“Yeah, he was utterly sinister,” recalls Mackintosh. “I’ve played a lot characters with a lot of darkness to them. I loved that about Robbo, that there was a fantastic lightness to him. He believes that things will somehow work out. There’s something philosophical about him and that’s there until the end of the story.”

Mackintosh has been a fan of Peter Bowker, the writer of From There To Here, for a long time. He first spoke Stockport-born Bowker’s words back in 1998 when he starred in the mini-series Undercover Heart. “I’ve always watched everything he’s done,” says Mackintosh. “You know when you get one of his scripts that it’s bound to be a good ‘un.” 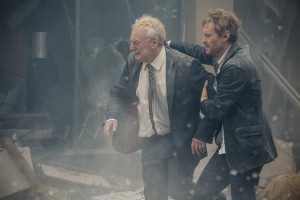 He adds: “Robbo was immediately appealing, there’s so much humour in the role. And I had fond memories of the mid-90s and the dance scene [in the show, Robbo owns a club]. Robbo has this humorous yet philosophical undercurrent. He cuts through the nonsense with these brilliant one-liners, he gets to the truth. He’s living an alternative existence in his own mind. He feels very much like he’s on the outside and is able to look in. That’s a brilliant device for the drama but also fantastic to play.”

Robbo isn’t the only part that has delighted Mackintosh. He started acting as a child and Adrian Mole gave him his first big break. “It was huge at the time. I couldn’t quite believe I was involved in this thing. That was the start of it all. I was lucky that I managed to make the transition and I’ve never been identified too much with one character.”

That’s true but there are plenty of people who recall Mackintosh’s portrayal of Fred, Scrooge’s nephew, in the cult classic The Muppet Christmas Carol. Made back in 1992, this film is an annual requirement for countless film fans and has spawned a slew of memorable lines (‘Lamp the light, not the rat! Light the lamp, not the rat!’). So, what does Mackintosh remember about this time?

“It was incredible. I was so young then and I’d only made one other feature film. To be asked to be in a film with Kermit and Michael Caine – I thought, you’ve got to be kidding. Talk about all your Christmases all at once. It was utterly surreal and utterly thrilling. And it’s become a Christmas classic. It’s found a special place in people’s hearts which is just lovely. The film has a great heart to it and it manages to capture the essence of the Dickens’s story. People do mention it to me a lot, even now. I never tire of it.”

Looking ahead, Mackintosh is likely to be on our screens for the foreseeable future. First up is Set Fire to the Stars, a Dylan Thomas biopic down to appear at the Edinburgh Festival. Starring Elijah Wood as John Malcolm Brinnin, an American poet and friend to Thomas, the movie has been shot in black and white and tells the story of how Brinnin brought Thomas to the US.

“I’m incredibly excited about it,” enthuses Mackintosh. “It’s a really lovely film about this tour of Dylan Thomas in New York and is set over several days. It looks absolutely brilliant. I play an American academic.”

Also due for release is a film shot in London’s East End, Bone in the Throat, and Gold, a film by Niall Heery, one of Mackintosh’s favourite directors, a bitter sweet comedy about a father reconnecting with his daughter and also featuring James Nesbitt. And that’s not all. Robot Overlords, a sci-fi adventure starring Gillian Anderson and Ben Kingsley, is slated for release soon.

This is all awesome but let’s get down to the nitty gritty. If you’re a female reader (or, for that matter, male), you’ve probably been wondering when I’m going to mention the elephant in the room. So, Mr Mackintosh, what’s it like being a sex symbol?

I decide this isn’t the time to divulge that I’ve had a FEROCIOUS crush on Mackintosh since his part in Prime Suspect as a merciless gang leader (not the best role model, I’ll admit). Nor is it an opportune moment to share that I once saw him in the foyer at London’s Almeida Theater after a wonderful play In a Dark Dark House and was so star-struck that all I could do was stand and gawp. So, I demure. And I content myself with the knowledge that, when a friend of mine asks me after the interview: ‘Did you lose your shit?’, I am able to say, no, I didn’t. But that was only because Steven Mackintosh was so nice which, to be frank, doesn’t help one iota with my unrequited love. Sigh.