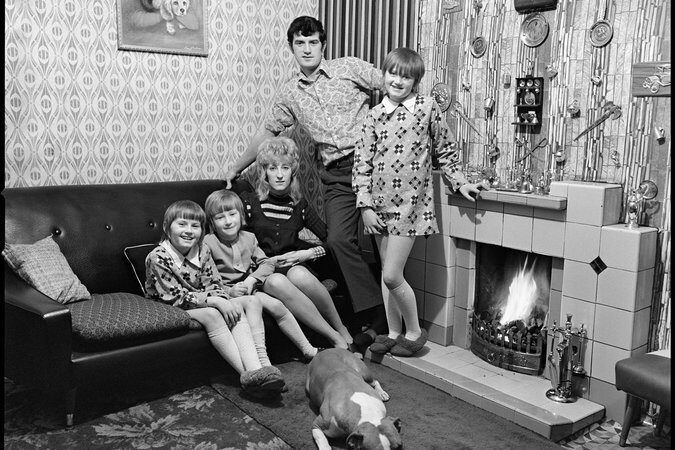 The ordinary and the everyday has been grist to celebrated photographer Daniel Meadows’ mill for 50 years.

He’s best known for his 10,000-mile trip on a double-decker bus in the early 70s when he took close to 1,000 portraits of the everyday folk he met along the way. At the time, the Daily Mirror dubbed it ‘The Great Ordinary Show’. He’s currently posting some of these portraits on Instagram; one a day for 50 days to mark his half-century in photography.

A photo taken on a rainy day in Barrow-in-Furness in 1974 of a man with his head thrown back launched proceedings. Two more Barrow shots followed, and on day four a Newcastle portrait prompted @joannaquinn to comment “Oh my goodness that is me and my best friend – haircuts and all!”

Meadows, whose archive was acquired in 2018 by the Bodleian Library in Oxford, photographed people for free on the streets of 22 English towns and cities while on his 1970s 14-month Free Photographic Omnibus tour. “The bus was a place for having random encounters with strangers, and it was an attempt to be a very democratic, somewhat idealistic young man’s attempt at seeing who we are, at that time,” the photographer, social documentarist and digital storyteller tells Northern Soul from his home in Monmouth, Wales. 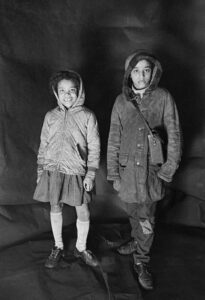 The idea for the bus trip originated in Moss Side where Gloucestershire-born Meadows lived when he was a student at Manchester Polytechnic. The area was to be bulldozed – “everyone was aware that this was all going to disappear, that this vibrant thing was being killed off because it was being called a slum” – and Meadows wanted to respond.

So in 1972, inspired by Irving Penn’s Worlds in a Small Room where Penn took a portable studio round the world photographing indigenous people, Meadows set up a free photographic studio in a former barber’s shop in Greame Street. “I thought I would try and photograph the community before it was broken up. That was a model for the bus in that I loved this way people came to me. I wasn’t like a hard-nosed journalist with cameras and tape recorders…I was just sitting in my little shop and people poked their heads round the door and said, ‘oh, do you take pictures?’ And then we’d start chatting and you had this sense of people coming to you, they were offering something, volunteering something rather than you getting them to fit your project. My project was just sitting there, letting them shape it. I love that body of work.”

He’s called the resulting photographs “electric” and, when I speak to him, he puts this down to the fact that he was completely out of his depth: “I was a southern boy. I’d never lived in the city. My family all lived in the countryside. I was still young, my first time living independently.”

The Greame Street studio it turned out had legs, or wheels, and in September 1973 Meadows set off on the Free Photographic Omnibus. He had to write letters “six weeks in advance” to get permission to park in city centres. “But I lived on a bus, so where would they return the letters to?” The 1948 bus – snapped up for £360 – was beset with mechanical failures, vandalised and broken into a couple of times too. But a mix of “good fortune, luck and the good will of people” got him through. 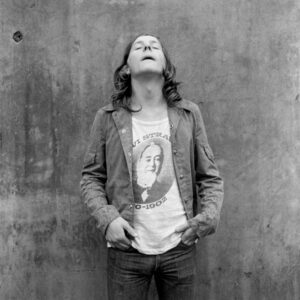 The portraits he took were only part of the picture. It was long-term champion of his work curator Val Williams who separated these out from the rest of Meadows’ work. He’d also captured conversations on “cranky old tape recorders” with the people who’d posed for him. These evolved into the ‘Talking Pictures’ on his website where he meshes audio with photographs.

One came about after Meadows pulled up outside Italo Rigali’s fish and chip shop in Easington Village, County Durham. Meadows bursts into song when I mention it.

“Oh these bollards don’t come very cheap, the evil fish fryer sees them in his sleep. He [Rigali] is singing this embittered and very personally directed calypso about the councillors who’ve put bollards outside his chip shop. Instead of writing letters to the press and everything, all he did was ridicule them every night in Working Men’s Clubs singing his Bollard Calypso and getting everybody to sing songs against their own elected councillors. And of course, that’s the one thing that people in power can’t stand is being ridiculed. He won. He sent me a newspaper cutting, Village Fish Fryer Wins His Battle of the Bollards.”

Meanwhile, Meadows was photographer-in-residence in Pendle District, Lancashire between 1975 and 1977. ‘Talking Pictures’ of those he befriended also feature on his website.

“Stanley Graham was an engineer at Bancroft Weaving Shed – this was the age of Johnny Rotten and Concorde and it was powered by steam.” Charlie Sutton – a flue cleaner – and his father Jim are there too. In Charlie’s photo-story he explains why he didn’t become a Catholic priest: “I’ve got all the Latin but me dad wanted sweat out o’ the bones,” Meadows says, channelling Sutton suddenly. “His Dad is Jim, the kite flyer. So, when you meet Jim, you think he’s going to be a really hard man with hobnail boots and a big stick and he’s going to beat me up. And he’s this gentle old chap with this lovely sly way of talking…He’d sniff around the old mills until he found just the right piece of light cotton he needed or sacking. Then he’d fly the kites and say ‘come on, have a hold of the string, lad’. I wake up in the night hearing their voices still.” 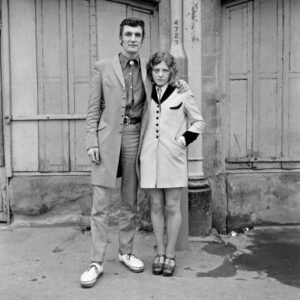 Elsewhere on Instagram, Meadows’ friend and fellow Manchester Polytechnic student Martin Parr is posting the pictures the pair took in June Street, Salford back in the day.

“I always love it when these pictures are exhibited,” Meadows says, recalling listening to people as he sat in the gallery at his 2011/12 Bradford show at the National Science and Media Museum.

“The June Street pictures had this amazing quality of getting people talking to each other. Complete strangers would talk to each other because they couldn’t resist saying, ‘we had a gas fire like that!” and ‘fancy that woman not putting her tights away!’ All of these kinds of comments which make people have this sense of that’s where they come from.”

Meadows secured a job at Granada after his 1978 photographs of long-stay psychiatric patients undergoing a controversial behaviour-modification programme at Prestwich Hospital, Manchester appeared in The Observer. World in Action had wanted to cover the story, and they were on the interview panel.

“I managed – it took about six months I think – to get myself into that ward and I lived in it for two weeks with the patients. And part of the hospital’s conditions were that I would have to be interviewed by all the patients and that all the staff had to know what I was doing, and I wanted to live there as a patient and see how it was – anyway it was a big heavy number – and probably a bit tough on my psyche to be honest.”

The Smoking Room is the gruelling watch on his website about this – nicotine addicts segregated in Clayton Ward earn tokens for ‘good’ behaviour; tokens they need to buy cigarettes, food and drink.

Meadows describes a 1979 shoot with Vini Reilly of The Durutti Column, when he helped some Northern lads glue together the sandpaper sleeves of Fact 14, The Return of the Durutti Column. “It was a nice way of spending the afternoon, but I didn’t really realise that this lot were Joy Division, until a little later.” Meadows’ memories from that time are documented in Savage’s This Searing Light, the Sun and Everything Else: Joy Division: The Oral History. 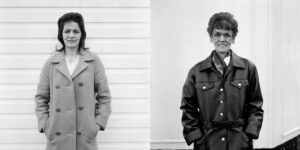 Now and Then portrait from the Free Photographic Omnibus Mary Clarke, Hartlepool, Cleveland. 1974 and 1998

Later, in the 1990s, Meadows traced some of the people he’d photographed while on the Free Photographic Omnibus and retook their portraits. The photographs featured in Daniel Meadows: Now and Then at the Bodleian’s Weston Library last year. Mary Clarke was one of those who came forward.

“The local newspaper [in Hartlepool] really bought into the whole thing. They had a reporter who did a lot of research and helped me find people. Mary turned up and she just could not stop talking. She’d had quite a hard life. She was this mix of incredible vulnerability but at the same time telling us about all the pubs she’d been banned from. At the time a lot of people were really quite moved by Mary.”

Regarding 50:50:50 Instagram project, Meadows says: “I wanted to do something that celebrated the fact that it’s 50 years but also to keep talking about the work . The people in the pictures to me are always important, they live as much in my head as they do on the page in books.”

It turns out it’s his first Instagram foray. Meadows, who has MS, has stopped taking photographs because they disappoint, he says. He is Zooming, however, three times a week with a group of younger photographers during lockdown. “I was saying to them, look I really don’t understand social media – being a needy old grandad – and one of them said well, look and he showed me that I had 600 followers and no post. That sort of made me think that either Instagram’s a bit weird or I ought to put a post up there and see what happens.”