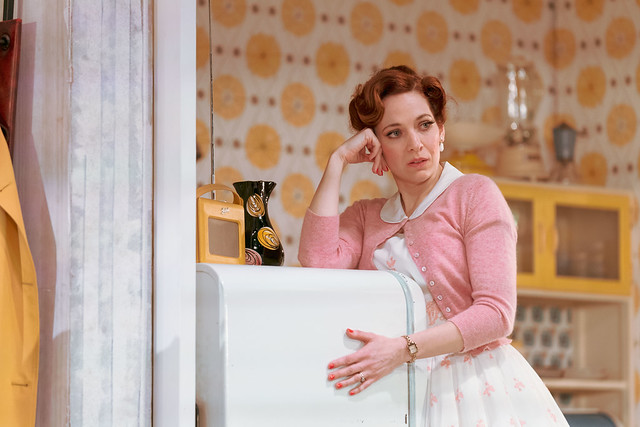 Laura Wade’s Posh from 2010 was a riotous and righteous savaging of the English class divide. It made her name as a contemporary playwright with something to say.

Nearly a decade later, Home, I’m Darling sets its sights on, hmm, what exactly? Is it the nostalgia industry, fetishizing a ‘safe’ past and thus booming in a time of uncertainty and fear? Or could it be the disappointments sundering the feminist movement now women have been freed to make the ‘wrong’ decisions for themselves? Maybe it’s just the instability of the institution of marriage itself, wrapped up in an incarnation of the old Roxy Music assertion ‘in every dream home a heartache’?

Whatever its target might be, Home, I’m Darling is far too scattershot to actually hit it. No wonder, then, that the audience members close to me, having evidently suffered a tragic irony bypass, seemed to spend more time singing along with the cheesy 50s hits which peppered the soundtrack than they did pondering the import of the play. Come to think of it, maybe they had the right idea – at least they were enjoying themselves. 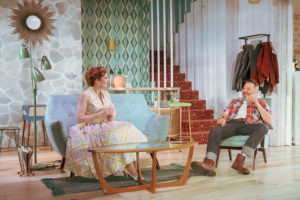 Judy (Katherine Parkinson) and Johnny (Jo Stone-Fewings) live in a faux-50s dream home (designed, incidentally, by Anna Fleischle, also responsible for the rather more radical look of the Royal Exchange’s West Side Story) which she floats around dressed like a prom queen with a frilly apron to protect her lovely frock while preparing his breakfast and making him a packed lunch before he ventures forth into the cruel, outside world. This is an escapist, borderline bonkers fantasy, of course, cobbled together courtesy of constant visits to eBay via the laptop kept hidden in their 50s-to-a-fault kitchen.

Unsurprisingly, the authentic 50s fridge isn’t the only thing on the verge of breaking down. Their finances are nearly ruined by this expensive fixation, Johnny is no longer quite sure why he went along with Judy’s 50s obsession in the first place, and she’s so hysterically wrapped up in it all that she’s surely going to implode at any minute. Meanwhile, Judy’s mother Sylvia (Susan Brown) pops up at regular intervals to point out, at some length, that she and her sisters didn’t fight the feminist wars just so that Judy could wear lovely old frocks, clean behind everything, and cook her man delicious meals. In fact, she contends (to the audible approval of parts of the audience) that the 50s were actually pretty shit for all sorts of reasons, and especially if you were black, gay or, heaven forbid, enjoyed eating edible food.

Having established this paradox and thrown a few more slippery characters into the periphery of proceedings including married couple Fran and Marcus (Siubhan Harrison and Hywel Morgan), who discover they can’t simply dance their troubles away, and Johnny’s thoroughly modern boss Alex (Sara Gregory), Home, I’m Darling simply simmers and glares its way, despite a few very funny lines, to a rather flat ending in which compromise, gin and cigarettes seem to be the only way out. That’s if it’s not already too late, as it might well have been for a decidedly deflated audience.