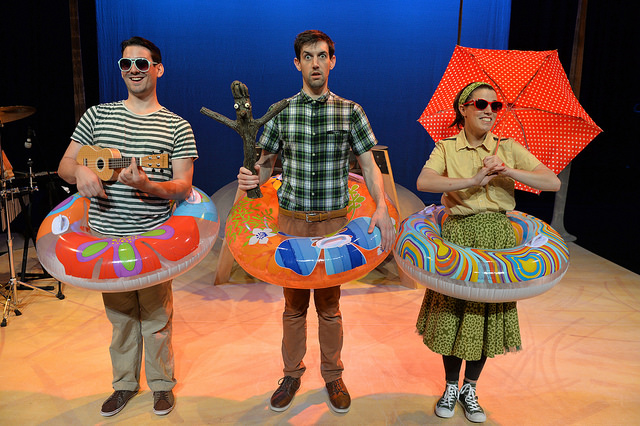 Roll up, families seeking a pre-schooler-friendly Christmas production without a cast full of X Factor semi-finalists and too many flashing lights. Roll up, lovers young and old of Julia Donaldson’s globe-conquering books. Roll up, anyone in pursuit of a gentle yet energetic, witty and warm-hearted hour of festive theatre.

Scamp Theatre’s charming adaptation of Stick Man is an inventive take on a modern children’s classic that is not, let’s face it, a natural candidate for a live-action remake. Its central character is, after all, a stick. Aside from the obvious logistical challenges this presents, it simply begs a reviewer to describe the actors as wooden. Irritatingly, they were anything but. An engaging trio of high-octane performances kept the young audience captivated throughout this tale of Stick Man’s odyssey back to his Family Tree after being waylaid by a slobbering dog and multiple others, from a nesting swan to a posh, beach cricket-loving couple. 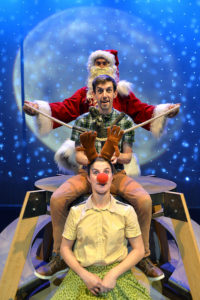 The eponymous hero was played by both a puppet and a human actor voicing his laments about being mistaken for a common-or-garden twig. This took my three-year-old a few minutes to grasp, but thenceforth she was not only on board with that arrangement but fully invested in the fate of the three stick-children who were nothing other than diminutive models. Would these small, googly-eyed pieces of wood ever see their father again? The improbable suspense was palpable yet punctured by just the right amount of panto-style interaction. The aforementioned dog ran amok through the aisles, an inflatable beach ball bounced along lines of outstretched arms, and the whole audience gleefully put fingers on lips to share in surprising Mrs Stick with her husband’s return, accompanied by none other than Father Christmas.

When the family was duly reunited, the three-year-old was genuinely delighted, bouncing up and down on her booster seat and clapping with relief that Stick Man had escaped the fire and come home. A snow machine then put icing on the proverbial cake before her review was forthcoming and succinct: “I don’t want it to be finished.”

Putting small children’s books on stage is a lot harder than one might think. They are short, low on plot twists and often involve hard-to-recreate characters such as gluttonous tigers, hungry caterpillars and, well, sticks. I have seen several great books transformed into distinctly average live shows. This one is anything but.

Stick Man is at The Lowry until January 6, 2019. For more information, or to book tickets, click here.

This painting by Tom Dodson is called Nitty Nora...good lord, that's a blast from the past. That was the worst day of the school year. pic.twitter.com/XiVCwype56

My, we miss the chippy... (The Fish and Chip Shop by Salford lad Tom Dodson) pic.twitter.com/zPnrNyeroJ

Taken in North Yorkshire by our photographer @Landscape_fotog, this is one of our favourite photos ever. pic.twitter.com/PY1R89mdZm

We HAVE to do this here....Australians have started dressing up to take their bins out... bbc.co.uk/news/av/world-…