“He looks very young for a director,” says the woman next to me in the Cornerhouse cinema. It’s the opening of the 20th ¡Viva! film festival and Gabriel Nesci is talking about his film Dias Di Vinilo (Days of Vinyl) and what it means to him to hold the UK premiere in Manchester. “Yes, well,” I whisper to her, “they are now sometimes”.

Before Nesci stood up, we had both been guessing which one the director might be. I like a stranger who will happily strike up a conversation (a sober stranger you understand). I’d opted for a young man wearing a brooch and sporting an unusual hairstyle, who was being fussed over. She had chosen an older, grey-haired man who had an accent – both of our choices stereotypical in their way.

As for the film itself, Dias De Vilino is an adorable comedy about a group of friends who have known each other since childhood when, by chance, an eclectic mix of LPs are thrown out of a window and land at their feet. The film has a recognisably feel-good soundtrack including many Northern bands and singers, underscoring loves and hates and passions just like mine.

Listening to Nesci talk, I imagined him two decades ago, just a boy, surrounded by his treasured LPs, sat crossed-legged on the floor in his bedroom with Mozzer on the portable record player giving it ‘love is natural and real, but not for such as you and I’. Just a little lad who loved the atmosphere, the melody and the lyrics of British music. Yes, I guess like he said, it was a big deal to have his UK premiere in Manchester. 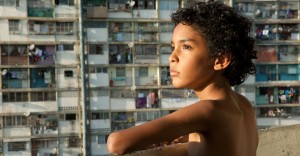 Twenty years ago I was in a living room above a pub listening to the muffled juke box underneath playing soft rock (the preferred choice of the Royton pub regular at the time). Perhaps Heart, maybe Van Halen, an inappropriate soundtrack for my self-pity and anticipation of being a single parent. We could have swapped round music easily, young Nesci and I. Him – happy and transported (‘this must be just like living in paradise’), me – very scared, very lonely (‘if you’re so funny, then why’re you on your own tonight’). But now, in Manchester’s Cornerhouse, we both reflected on how our past has shaped our present so brilliantly.

I can understand why the musical heritage and culture in Manchester appeals to Spanish and Latin American eyes and ears because we are both rich in style and form and sub-cultures. I think ours was born out of the anthology of eras represented architecturally in the city, and this rich mix is also true of our love of different musical genres and the trends of our musicians and bands – any genre of music will be played somewhere here on any given weekend.

Jessie Gibbs, co-ordinator of the ¡Viva! festival, talks passionately about the flip-side of the coin; why we in Manchester (in addition to the fact we have a huge ex-pat community) embrace this Spanish and Latin American film festival. 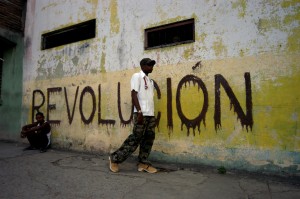 She says: “Latin American culture combines a sense of the familiar, with its European heritage and the excitingly different, with its geographical distance from our shores. The popular image of Spain and Latin America is packed with a wonderful variety of music, dance, cuisine, art, architecture and landscapes – among other things. When you consider all of this it comes as no surprise that our festival creates such a buzz and has been going from strength to strength over the past 20 years.”

Gibbs looks too young to have been involved in the festival for eight years. She must have been a toddler giving out programmes at the start. Since this year is a special anniversary, I ask her which film is her personal favourite.

“It’s always difficult to choose favourites from the line-up but I would definitely like to mention the exquisite Colombian film Cazando luciérnagas (Chasing Fireflies), another directorial debut, and a very different type of film to our opener. This is a very quiet, atmospheric piece, with only two human characters on screen for the vast majority of the film (plus one adorable dog), and very little dialogue. I think you’ll be amazed at how deeply it touches the emotions. I think the visual beauty of this sun-drenched Colombian film sums up some of what the draw is for local audiences – a breath of fresh air and a happy reminder that spring is upon us.”

So last weekend ¡Viva! celebrated its 20th anniversary and I celebrated my eldest son’s 20th birthday, facing the fact that I am now the mother of an actual man. The weather has changed for the better and everyone and everything is older and more beautiful.