Vivid Lounge has a London feel about it.

I don’t mean a pretentious ‘you can’t come in here if you’ve got shorts on’ air, or the equally unpleasant, monotonously copied habit of meticulously-folded napkins, chain restaurant scene either. No, none of that. I mean it has the ambience of those chilled, unique little places that you stumble across by accident, far away from the main shopping streets. The places that surprise and enchant. The places that make you say, ‘this is cool, I’ll have to come back here again’. Vivid Lounge is that sort of place, with the added benefit of not having the London price tag.

A short walk from Manchester’s Northern Quarter and situated at a scenic spot on the Ashton Canal, Vivid Lounge is a splendid place to bask in the sun. The restaurant itself is small and triangular, and should be renamed simply Vivid until nightfall because the floor to ceiling glass walls let in loads of light, meaning that the airy space functions as the perfect café/meeting spot during the day. 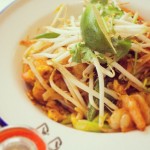 Vivid Lounge serves hearty breakfasts, lunches and an array of cakes and brownies (all homemade of course). As the sun sets, the menu switches to Thai dishes and the restaurant transforms into the Lounge, with low-hanging, colour-changing mood lights dimly illuminating the diners.

Athough you might notice some spelling mistakes in the menu don’t let that put you off, the food is flipping gorgeous, and all made from locally sourced meat and vegetables. Inspired by popular Thai street food, the menu ranges from dishes consisting of old favourites (Thai fish cakes) to tempting new taste sensations (beef massaman).

For starters I tried the pork skewers which were sticky, smoky and sweet, with a flavour comparable to a barbecue sauce. They were so deliciously moreish and complimented perfectly by the chilli dip that I could have happily gorged on these beauties for all three courses. Wor Lad had some Thai sour sausage which he would like to clarify as being “not lemon sour, refreshing sour”. And that’s true, they were oddly (yet pleasantly) palate cleansing. 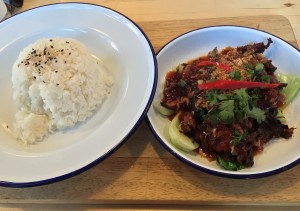 The main courses were beautifully presented and full of colour. The duck in tamarind sauce was as delectable as my pork starter, so I had to finish every last crispy morsel. Think of the golden shredded duck in hoisin sauce you get with Chinese pancakes and you’re on the right lines flavour wise. This fantastic fare was served with a large mound of jasmine rice, which wasn’t particularly jasminey but this may be because it was masked by the tamarind sauce. Wor Lad enjoyed the Pad Thai, a classic street food dish combining prawns, beansprouts, peppers, egg and noodles. I would to love to tell you what it was like but I’m not a noodle person myself and, unfortunately, Wor Lad suffers from an acute lack of imagination, though he assures me it was “very tasty”.

Plenty of well-matched hot and cold drinks are on offer to compliment your food, with local beers available including Manchester’s own Shindigger. Definitely book ahead as it fills up quickly in the evening, or instead just pop in during the day to grab a slice of cake. But don’t buy any of the chocolate orange brownies. They’re all mine.