Marissa Burgess September 6, 2019 Arts, Comedy Comments Off on What’s on in September: Comedy in Manchester

It’s September and time to head back to the Manchester comedy circuit. Have you noticed that all comedy clubs smell exactly like fresh new pencil cases? No it’s true, honest. If you don’t believe me head down to see this lot.

Brushing down their new school uniform this month are the city’s only two dedicated comedy clubs.

At the Frog and Bucket this month there is the usual packed Thursday to Saturday weekend line-ups of headline level acts. Plus of course the gong style newbie nights on the Monday at Beat the Frog. Not long now until the World Series competition, the annual culmination to find the ultimate victor of each Monday’s winners, which starts at the beginning of next month. Also this month Mongrel comedy on Sun 8 sees a showcase of comedy, music and poetry as brought together by Little Hulton’s own comedian, Steve Harris.

At the Comedy Store, aside from their stand-up shows, the amateur night King Gong is on Sun 1 and seasoned act Alex Boardman presents his favourite of the newer acts on the circuit in New Comedians on Sun 15. Professional acts test out fresh material at New Stuff on Sundays 8 and 22, then there’s Comedy Store for Kids on Sat 21. Plus on Sun 29 BBC Radio London DJ and comedian Aurie Styla drops in with Just Like That.

And into its birthday month, XS clocks up a remarkable 22 years and will be celebrating on Tues 24 with a special birthday show. Given the respect this night holds among the industry and punters alike the secret line-up will be a starry one for sure. Before then the headliners include Sean McLoughlin with his intellectual humour on Tues 3, the innovative Geordie oddball Seymour Mace on Tues 10 and crazy Swedish prop-man Olaf Falafel on Tues 17.

The as-seen-in-the-final of America’s Got Talent in 2016, Tape Face returns to Manchester where, back in the day, the New Zealand street performer spent much time on the local circuit working on his Tape Face creation. Silent, enigmatic, clever and bloody funny here he is with his latest mix of mime, music, magic and gaffa tape.

The self titled ‘clown in a gown’ and RuPaul’s Drag Race sixth season winner returns to Manchester with her latest It’s Jester a Joke show.

Those of us who remember Brush from his 70s/80s heyday always suspected there was something a bit naughty about him. Well, we’re proved right in this adult show from the foxy one. 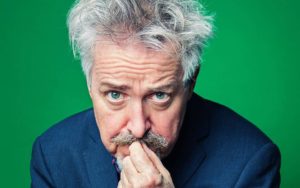 The star of Not The Nine O’Clock News and Alas Smith and Jones returns to the live stage with a new stand up show All Over The Place.

Originally from the Soviet Union but raised in Chicago, the stand-up has clocked up many TV appearances and writing credits. Check her out.

Chaponda came to the Manchester comedy scene from his native Malawi via Canada. We all knew how good he was then but it took his appearances on Britain’s Got Talent for the rest of the country to wake up. Thankfully now he has the interest he deserves, here’s his latest show Blah Blah Blacklist.