Having reached their 15th event with this collection, Reallife Theatre Company, the organisers of JB Shorts, are patently enthusiasts for the ‘if it ain’t broke, don’t fix it’ philosophy. And who can blame them? The JB Shorts evenings have become one of the best-loved fixtures on the Manchester theatre scene, routinely attracting sell-out crowds and the cream of Manchester’s writing, directing and acting talents to a brisk, comparatively cheap and invariably cheerful evening of six short (I know, who would have guessed it?) plays.

You can, if you’re so inclined, get all excited at the proximity of so many familiar TV faces in such an, erm, funky environment (it’s a downstairs club space at Joshua Brooks with seemingly as much beer spilt on the stairs as sold behind the bar), or you can revel in the astonishing level of talent we have locally. Mostly, though, you can just relax and enjoy yourself, confident in the knowledge that even if a particular 15-minute play doesn’t thrill you, another will be along in just a few minutes and that one might well blow you away.

Without imposing too much unnecessary critical reasoning on a necessarily random selection, it’s interesting that two of the pieces – Lisa Holdworth’s A Different Time, directed by Rebecca  Taylor, and Trevor Suthers’ Build A Bonfire, directed by Sue Jenkins – touched on the hot-button topic of historical sex abuse, albeit in quite different, and surprising, contexts, while the lambasting of politics (Paul Mason and James Quinn’s Party Animals) and religion (Paul Coates’ False Prophet, directed by Jack Lord) remain reliable audience pleasers.

The evening opens, though, with The Intruder, written by Diane Whitley and directed by Alice Bartlett. A touching and intriguing piece, it stars Joan Kempson and Melissa Sinden as Joan and Judith, two elderly and isolated sisters for whom the intrusion into their house by young Mikey (Joe Wandera) stirs up unwelcome shadows from their past. 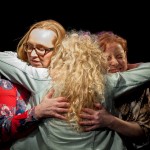 Events from the past, although of a more bawdy and boozy nature, initially inform the second play A Different Time as snooty Linda (Jill Myers) and the more likeable Amanda (Joyce Branagh) rudely discuss the misadventures of their old schoolmate Samantha (Tigga Goulding). But the arrival on the scene of Samantha herself puts a very different perspective on those events and the play’s sudden, provocative climax was one of the highlights of the night. Humble, written by Peter Kerry and directed by Chris Honer, brought the first half to a close with a very funny observation of office politics, starring Rachel Priest as Susan, Clare Cameron as Karin and Ethan Holmes as Steve, work colleagues driven to distraction by the hilariously bumptious Jeremy (Will Travis).

I’m unable to report whether the interval wine was in any sense watery but, if it was, the credit would have no doubt have been taken by Jesus (Thomas Vernal) in second-half opener False Prophet as, with increasingly desperation, he tried to maintain the devotion of his followers Mary (Shirleen Ashton), Judas (Leon Ward) and Peter (Rob Ward) after the arrival of new prophet in town Samuel (a very brief cameo from Nathan Morris). Shockingly irreverent, the former Catholic boy in me kept yelling, but very clever and funny.

Build A Bonfire boldly confronted the contradictory attitudes we have to art and the precise nature of its relationship to its creator as Marion (Kerry Wilson Parry), Joanne (Ann Brown) and Bill (Martin Wenner) conducted a very civilized and middle class argument about destroying the works of a convicted paedophile, at least until the arrival of a police inspector (Darren Maw) forced a rather different, just as difficult set of questions into play. 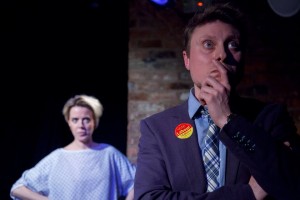 It was hard to imagine that Party Animals, a political farce based on recent events in the Labour Party, could have been placed anywhere but last in the running order. Cranking everything up to ‘11’, it was driven along by a quick-fire script and a brilliantly frenetic performance from Sally Carman as Fedora, the splendidly-named, elegantly-coiffed political chancer who was as dangerous as a rattlesnake in a small room, terrifying her lieutenant Richard (Nathan Morris again) and the overworked nurse Aisha (Zoe Iqbal), as well as anyone in the room who recognised her character as horrifying and grotesque but not too preposterous an exaggeration in these times.

A terrific closer, then, to another terrific collection of JB Shorts.