“You’re told that London is the centre of opportunity and it just isn’t.” Theatre Director Jake Murray talks to Northern Soul

There’s an eclectic mix of pictures on the walls of my house. Like many people, my home is my life writ large and among the mish-mash of Brontë quotes and self-deprecating swipes at my Northern heritage is a signed poster of the 1995 Manchester Royal Exchange production of Miss Julie.

Aged just 21 and one of ‘those’ theatre geeks, I won the poster in a post-show raffle during an evening where ‘friends’ (for that, read paying guests) of the theatre got to hob-nob with the cast and crew. Prior to this, the only thing I’d ever won was a Lion bar at a school tombola, so you can imagine my excitement. In 2019 that print is still on my wall, a sepia-tinted reminder of the day I met Amanda Donohoe and went home a winner.

Fast-forward a quarter of a century and I’m chatting to Jake Murray, son of the director of that 1995 production, Braham Murray. A titan of theatre as well as co-founder and long-time artistic director of the Royal Exchange, sadly Braham passed away last year, leaving behind a legacy that few others will emulate. Jake saw that 1995 show, too. 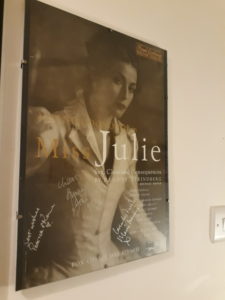 “I’ve been a Strindberg nut since I was about 16,” he says. “Growing up in that family we were reading everything. It wasn’t until I left home that I realised how unusual we were. My first proper theatre job was at the Wolsey in Ipswich. I was coming out wanting to do Strindberg and Ibsen and Eugene O’Neill and Tennessee Williams and I discovered that for most people they were lunatic fringe playwrights.”

He adds: “My dad and I used to argue about Strindberg and Ibsen because he didn’t like Strindberg, he described him as a ‘diseased playwright’, meaning they [the plays] were too negative, too dark. I knew what he meant but there was something about Strindberg that was so intense and passionate that I loved it. Since then I’ve read everything and this will be my sixth Strindberg. There’s something about his work which even now is so compelling for me. I can see myself doing many more.”

Born in Sweden and the author of dozens of plays, essays and poems, August Strindberg isn’t everyone’s cup of tea. But Jake says there’s more to him that meets the eye.

“Strindberg was a manic depressive, probably schizophrenic. He could go into the most appalling black moods, he could be profoundly paranoid. He endlessly bit the hand that fed him. He was also notorious for being a misogynist and could be impossibly difficult and jealous. But there was another side to him which was idealistic and poetic and romantic and generous. Weirdly enough, for all his difficult moods, an awful lot of women fell in love with him and he was married three times. He was also able to inspire the most incredible loyalty in people. To the very end of his life he was still trying to work out the agonies in his life which had torn him apart. If anything, towards the end of his life his plays are more romantic…He talked about the fact that when he was young he was very religious. But when he lost his religion he had to believe in something and replaced it with a belief in women and the belief in love and what women represented. So when his marriage ripped itself apart it was like a complete breakdown for him.”

Of all of Strindberg’s works, Miss Julie is the most well-known. It has been staged on many occasions. “I never wanted to do Miss Julie,” admits Jake. “Not because I didn’t like it but it felt like the obvious one, the one that is done all the time. Of all of them, it felt like the least exciting because some of the other ones are so challenging and compelling. I was much more interested in the more hardcore ones.” 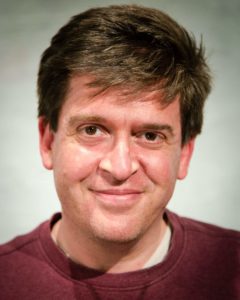 During his career, Jake has focused on all manner of playwrights, and worked for a number of theatres and companies. A quick glance at his CV highlights a slew of award nominations and accolades, and a series of high profile posts including assistant director at Chichester Festival Theatre, associate artistic director at the Royal Exchange, and associate director at Frontier Theatre Productions. Then, at the tail end of 2017, he co-founded Durham-based Elysium TC with actor Danny Solomon. As it turns out, the model of an ensemble of actors has worked perfectly for Miss Julie, not least because a permanent troupe (much like the rep-based theatre of old) makes for a faster and easier rehearsal process and a trusting relationship.

“At the moment we can only really afford to do plays with three or four actors. But what’s nice is that every time someone new comes into the ensemble, that opens up new possibilities. And what’s happening is that the actors are becoming part of the process of how you choose the plays.”

Miss Julie is at Manchester’s Hope Mill Theatre from June 18, but it has already toured around the North East. A play about servants versus masters, it questions the roles of victims and perpetrators.

Jake says: “Miss Julie is the only play he wrote which really deals with class. And because I’d always seen Strindberg as being about sexual relationships and men and women, I hadn’t really clicked with Miss Julie. But when I really engaged with the class aspect and understood that it was about sex and class, the play seemed to be amazing…I’m a Strindberg purist. I believe that the originals are so challenging and frightening and ambiguous that you do those rather than adapt them.

“The point about the original play was that neither side, neither John nor Miss Julie, have some wider political movement that’s there to help them. The power of the original is that neither of them have a safety net. That’s much more exciting to me. So we have kept it period but there are elements of stylisation in it. We’ve also set it in the North East. We had permission to adapt it. So the class thing and the accent thing suddenly comes to life.” 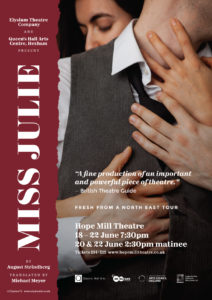 The class divide, particularly when it comes to North vs South, is something that Jake knows about. After he left Manchester in 2008 and, following stints in India and London, he moved back North, this time to Durham.

“You’re told that London is the centre of opportunity and it just isn’t. It’s oversubscribed, massively competitive and super expensive. Particularly for a director it’s very hard. And none of my work in Manchester made any impact on what was going on in London. What happened was that I met someone and fell in love and it so happened that she lived in Durham so I moved up. I’d been trying to get out of London for years. London is really for wealthy people and single people and young people. There comes a point where you just can’t do it anymore. ”

As a theatre practitioner, has it helped moving out of London?

“Beyond belief. When I agreed to move up to Durham, I kind of thought that’s it, I’m not going to be directing anymore because it’s hard enough getting any work in the south. But pretty much exactly the opposite happened. The big things are that everything is much cheaper to get on up here than London but most of all everybody is welcoming. Theatres have been willing to talk, open their doors and throw their resources behind you. It’s just been fantastic.” 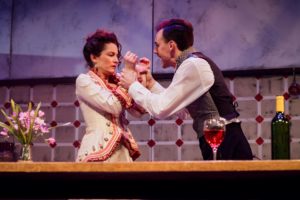