It was back in February when I first learned of the World Black Pudding Throwing Championship. I was casting around for potential ideas for articles and my Editor suggested I keep my diary free in September for an event like no other. She wasn’t wrong.

The challenge was simple enough. In the centre of Ramsbottom, outside the Oaks pub, a 20ft-high plinth towered above the crowd, stacked with two piles of Yorkshire puddings. Players were tasked with knocking as many Yorkshire puddings off the scaffolding as possible using black puddings as missiles. Three attempts were allowed with the stipulations being that underarm throws only were permissible and the player’s foot was to be on or behind a strategically-placed metal plate.

“It’s actually much harder than it looks,” says Holly, a participant from Tunbridge Wells. “You obviously don’t get the same amount of power behind an underarm throw, and if you want to maintain any kind of accuracy you have to really watch your arm.”

There was definitely a lot of trial and error involved as black puddings were launched with mounting enthusiasm in almost every direction, all to choruses of oohs and aahs from what rapidly resembled a panto crowd. Ramsbottom takes a great deal of pride in its position as the official home of the championships, and that was evident in the wonderful sense of community permeating the entire event: every player was supported with whoops and whistles not only from friends and family, but also from crowds of complete strangers. Whenever people broke away from the audience, a difference group took their place. And so the high street was an unceasing cacophony of gasps, cheers and laughter throughout the afternoon.

“I was reassured that most people were pretty rubbish,” Holly smiled. “It wasn’t intimidating at all. You really feel like everyone is rooting for you.”

As the next challenger stepped up to the plate, we were hustled politely out of the way. The queue stretched down Bridge Street and, despite its length, moved quickly. The event ran like a well-oiled machine, with a young lad darting out to the plinth between throws to collect the fallen Yorkshire Puds.

Over the course of the afternoon, I discovered that even an underarm throw allows for variation of technique. Take Dave from Salford, for instance. As he took his shot, his aim went wild and I watched his projectile soar towards an unruffled marshal on the top platform. He didn’t move as it bounced off his shoulder, and I guessed he’d quickly acclimatised to the rogue puddings (check out his expression in the gallery below).

Black puddings gained their reputation as fearsome missiles in 1455 during the Wars of the Roses when soldiers from the houses of Lancaster and York engaged in pitched conflict in nearby Stubbins. Ammunition eventually ran short and (so the story goes) the troops resorted to throwing food at each other, with Yorkshire puddings being launched from the Yorkshire side and black puddings flying from the Lancashire lines.

At this year’s chucking championships, it was ultimately Mark Cannon from Swinton who channelled the warring houses’ warrior spirit, blazing to victory by knocking eight Yorkshire puddings to the ground. Sadly I didn’t get the pleasure of having a go myself. But it was enough just to witness an unusual, quirky event steeped in familial pride and communal tradition: in short, everything that’s great about the North.

Words and images by Jack Stocker 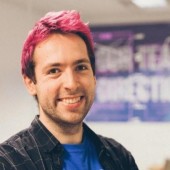 You know you’re Up North when…

Spy on the Tyne