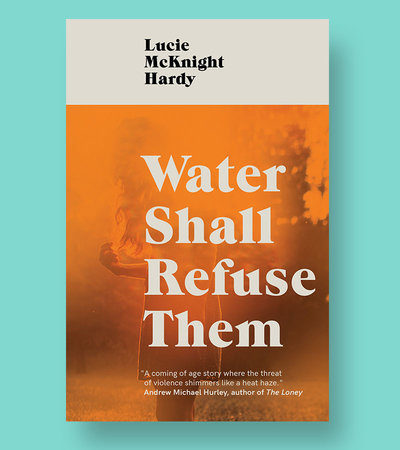 I’m a wimp. As the first to dive behind a cushion when a scary bit comes on the telly (I’ve been an embarrassment to my family ever since the Jurassic Park incident of 1993), I point-blank refuse to watch anything that can be filed under ‘horror’. But, strangely, I love me a spooky read. From Daphne du Maurier’s Don’t Look Now and Shirley Jackson’s We Have Always Lived in the Castle to Han Kang’s The Vegetarian and Jenn Ashworth’s Cold Light, I’m drawn to frightening tales penned by women and often with female characters at their core.
Recently, I finished Water Shall Refuse Them by Lucie McNight Hardy, published by Liverpool-based Dead Ink Books (Publisher of the Year, Northern Soul Awards 2018). Described as folk horror and shortlisted for the Mslexia Novel Award 2017 as well as being longlisted for the Caledonia Novel Award 2018, McNight Hardy’s debut centres around 16-year-old Nif and her family who, during the heatwave of 1976, move to a small village on the Welsh borders after the accidental drowning of her sister. As her family grieves, Nif begins to put together her own form of witchcraft – collecting talismans and performing rites – until she meets Mally, her seductively strange neighbour, who offers up his own secrets and rituals.
Dead Ink has declared the novel “reminiscent of the suspense of Shirley Jackson” and this observation is spot on. Jackson has a way of making the routine terrifying and, similarly, McKnight Hardy’s prose is sinisterly slow and macabre, but it’s her accurate – and often devastating – portrayal of family life that earns the comparison. The novel also focuses on local folklore, the insular nature of rural societies and the fear of outsiders. While Water Shall Refuse Them is clearly set in the 1970s, it feels unnervingly contemporary. Does a fear of outsiders and the compulsion to ‘other’ a group of people ring alarm bells for anyone else? 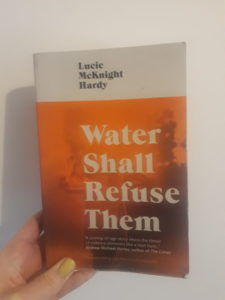 I was also struck with comparisons to Iain Banks’ The Wasp Factory (I’m not the first to note this, and I won’t be the last) with its frequent reference to rites and ceremonies and, erm, the animal cruelty. But while Banks’s tale is pretty grisly (this wimp loved it but found it tough to read), McKnight Hardy spins a narrative that is full of slow-burning tension and observation. Nif doesn’t focus on the violence she is inflicting, it’s more about the biology – and, of course, the ritual.
It’s an atmospheric novel and, at times, the stifling air is almost tangible. The unbearable heat and unwelcoming close-knit community (the feeling of being constantly watched and appraised sent a shiver down my spine) serves as a catalyst for a family crisis to reach boiling point, and eventually implode. It’s an incredibly astute portrayal of grief.
While the ending didn’t come as a surprise (glancing back over the novel, I feel like the author left the reader a trail of breadcrumbs), the realisation dawned on me like a cat stalking its prey; the pace is sluggish, like the hot summer in which the tale is set, deliberate and thoroughly compelling. I’m usually a bit miffed if I guess the ending but in this instance I was pretty pleased with myself, remarking “I knew it, I knew it” as I closed the book.
I’m excited to see what’s next from McKnight Hardy. She’s a remarkable talent. Not only is the setting and description in Water Shall Refuse Them so indicative of British landscape, it’s a bloody creepy, put your book in the freezer, sleep with the light on read, too.
Oh, and I’ll never look at a swan the same way again.
By Emma Yates-Badley, Literary Editor
Water Shall Refuse Them by Lucie McKnight Hardy is published by Dead Ink Books and available to buy from July 4, 2019