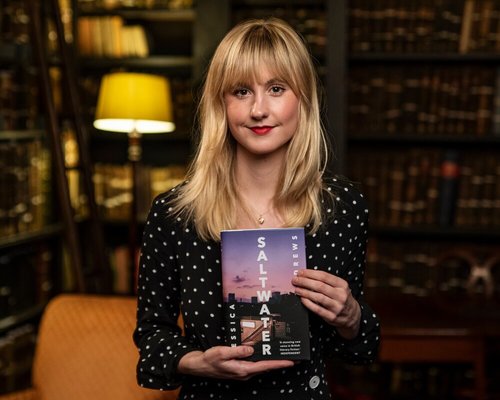 I’ve long been fascinated with The Portico Library, which sits above the mildly rowdy Old Bank pub on Manchester’s Mosley Street. Before moving up North, the local library I’d frequented had all the appeal of a doctor’s surgery so The Portico with its walls of books and stunning domed ceiling was one of the most beautiful spaces I’d ever seen. It is also the home of The Portico Prize, established in 1985, a biennial award that accepts submissions across all literary formats and gives £10,000 to an overall winner.

In today’s political climate, and following a divisive general election, a northern-specific literature prize is more important than ever. While the shortlist was incredible, I was rooting for Saltwater by Jessica Andrews to take first place and I was delighted when she won. The novel follows Lucy, a young woman trying to find her way in the world as she moves from Sunderland to university in London where she struggles and eventually flees to her late-grandad’s cottage in Ireland. While this could easily be viewed as a coming-of-age tale, Andrews, who was born in 1992 and grew up in Sunderland, manages to do something rare in literary fiction by creating a working class heroine written by a working class author.

The Portico Prize is awarded to the book that ‘best evokes the spirit of the North of England’. What does that mean to Andrews?

“My feeling of what the North is, is when you go out at the weekend, on a Friday or Saturday night, and you get on the bus and everyone’s there and they’re really dressed up and everyone smells of too much aftershave, they’re a bit drunk and being really raucous. But there’s this feeling of potential. There’s this real shared excitement and sort of fear and feeling that anything could happen. It’s a feeling of warmth but also of recklessness. I’ve never felt that anywhere else than in the North. My mum couldn’t believe it when she came to visit me in London, and everyone was in the pub with their trainers on. She was like, ‘What! Why haven’t they got their high heels on?’”

When I first moved to Manchester from the Midlands, I was stunned by a Whitworth friend’s refusal to wear a coat on a night out only to be advised that “nobody wears a coat out out”. Andrews laughs. “When I was growing up and going out in Newcastle, there was never anywhere to put your coat and I could never figure out which came first. I think that’s why we didn’t take one out because there was nowhere to put it.”

Coat-based differences aside, Saltwater deeply resonated with me. It’s not only structurally unique, but Andrews has managed to capture and explore the working class female experience in a way that I don’t think many other writers have been able to do. But how does winning The Portico Prize feel?

“I do lots of work around class and gender and thinking about what kinds of voices get to speak. [The win] feels like a real validation that these things are important. Obviously, it’s great for me on a personal level but, on a wider level, the women and the themes that I wanted to write about in Saltwater, it validates them and says, ‘Oh, yeah. They are important. They are literary. And we are going to give space to this.’” 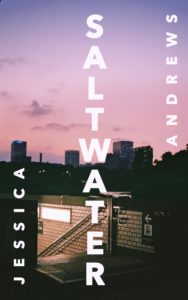 Does Andrews think that The Portico Prize is important? “It’s politically important because books about the north aren’t given as much airtime. The [shortlisted writers] are all working class or the first person in their family to go to university. There’s so much conversation about how we go about finding working class voices, so to have a prize that’s about the north, it’s inherent that that would be about class. It feels like a progressive thing to do. Often when I go to literary things, I feel like I have something to prove, or imposter syndrome which I think everyone has, but it felt different at The Portico Prize event. Even people having a similar accent to me. It was illuminating for me to feel that, because it made me aware of how different I feel in other environments.”

She continues: “The prize focuses the conversation around the north and raised questions such as ‘what is class?’, ‘does it matter?’, ‘should these voices be listened to?’. Particularly this year and the kind of things people are saying about the north and the confusion people are feeling, it’s important to talk about northern voices.”

There has been much conversation (quite rightly) centred around access to publishing. Did Andrews feel any barriers when writing Saltwater?

“I’ve been thinking about this a lot,” she muses. “My book was published quite fast, but the road to being able to write it was hard and that’s the problem with this question about access. If you’re a person who is at a disadvantage, you’re often not about to get to the point of being able to write a book anyway. It starts in your childhood, your education and your aspirations.”

Saltwater is semi-autobiographical and draws on a lot of Andrews’ personal experience. She studied English Literature at the University of London and found it tough. “I felt so many feelings that I didn’t know were to do with being working class until years later when I understood what I felt.”

When Andrews’ Grandfather died, he bequeathed her a small sum of money which she put towards a Master’s in Creative Writing (“it was mad for me to do it, I had just enough money to cover the cost”) which she completed while living in Paris in “an attic building with no shower”, teaching English and working as a nanny.

“It became apparent that so many of my classmates’ lives were much easier,” she explains. “But at this point I had the vocabulary to understand that it was to do with class, and it made me feel determined rather than demoralised.” 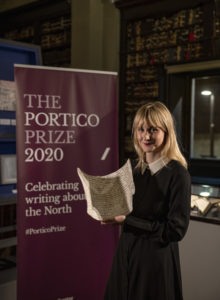 After completing her MA, Andrews moved back to London where she found it “impossible” to write a novel. “When my Grandad died, he left this empty house in Ireland and I thought ‘OK, well, I can go there for a few months and I won’t have to pay rent and I can write my book’. I only had £200 saved up and tutored a local boy for 20 euros a week. But if I hadn’t had that privilege, if my Grandad hadn’t died, I wouldn’t have been able to do any of it.”

She adds: “When people talk about access and diversity, it needs to be earlier than when you’ve written a novel because there are so many people that are talented but for a myriad of reasons – time, space, self-belief – they can’t. The self-doubt is crippling. I still have that now. You write something, scrap it and think ‘why would anyone care about this?’”

Like Andrews, I was the first person to go to university in my family and, after graduation, I found it difficult to find my place in the working world, picking up jobs here and there because I wasn’t sure what I was supposed to do. How do you navigate the world when it’s so different to what you experienced growing up?

“I still don’t really know,” says Andrews and we both laugh.

“No, me neither,” I say, and I wonder how many other people, how many women, feel the same?

For those who move cities or even countries for work or study, the idea of ‘not fitting in’ or being outside of something – either your home town or the place you now choose to live – is inescapable. For Andrews, writing and the publication of Saltwater alongside the work she is now doing in the north east means she no longer feels this. “I don’t feel like ‘oh, I’ve left, and I can never go back, or I’ll never be welcomed back’ because people in the north east have been so receptive to the book and the ideas in it. It’s made me feel much more connected to my home town. For a writer, it’s always really useful to be outside of a place to write about it.” 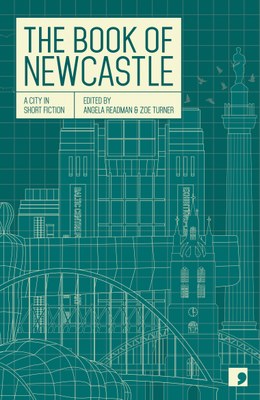 Andrews also has a short story, Blood Brothers, in The Book of Newcastle published by Comma Press. “It’s very much in conversation with Saltwater,” reveals Andrews. “It could almost be an extra chapter. I wanted to explore the idea of betraying your home town in your identity when you leave it but through the perspective of a female friendship and what it means to be two young women who grow up together but want different things and make different choices. It’s also to do with feeling like you want to protect people. You leave in search of something but maybe feel guilty about that and maybe when bad things happen to the women in your life that you left behind you feel in some way complicit.”

The story also explores the different stereotypes of femininity and class transgressions. “When I was a teenager, you would go out in your little dress and your high heels with no coat and loads of make-up. But my more middle class friends didn’t wear make-up and is that a betrayal if you start to mould yourself in this other way of dressing or pressing yourself? It can feel like a betrayal of the women you’ve left behind.”

“I think about make up all the time,” adds Andrews. “Normally, in some middle class feminist circles, there’s a bit of a make-up snobbery like ‘oh she’s got lipstick on’ and I think ‘oh, wear lipstick if you want’.”

What makes Andrews’ writing so distinctive is this wonderful ability to self-reflect. She doesn’t approach the subject of class with defeatism, rather with an innate curiousness and desire for change. Much like Lucy in Saltwater, Andrews is finding her voice – and using it. But does she ever find it difficult to answer questions about the north east, a place that has been under-represented and typecast in the past, and remain true to her own experience?

“I definitely feel that pressure…because it’s a place that’s not given a lot of airtime. I want it to have a positive representation and you sometimes feel like you can’t say anything bad. That’s a misrepresentation, especially when you’re writing about class and gender. It was important to me to have joy and hope in the book because all of those things were in my life, but at the same time you don’t want to romanticise it because there are things that are bad and hard.

“I didn’t really identify as northern or working class until I lived in London. Your identity shifts when it’s ‘othered’ and in opposition to something else.”

“When I was teenager, I couldn’t wait to leave but that’s not how I feel now,” she adds. “But to erase all those feelings isn’t right either. You have to acknowledge both. I can only speak from my experience. I am not the voice of Sunderland.”

Saltwater is published by Sceptre Books and available to buy now.

To read Northern Soul’s interview with Holliday Grainger, one of the judges for The Portico Prize, click here.