The Lost Carnival: a family arts experience in Bury

Kevin Bourke May 22, 2015 Arts, Theatre Comments Off on The Lost Carnival: a family arts experience in Bury 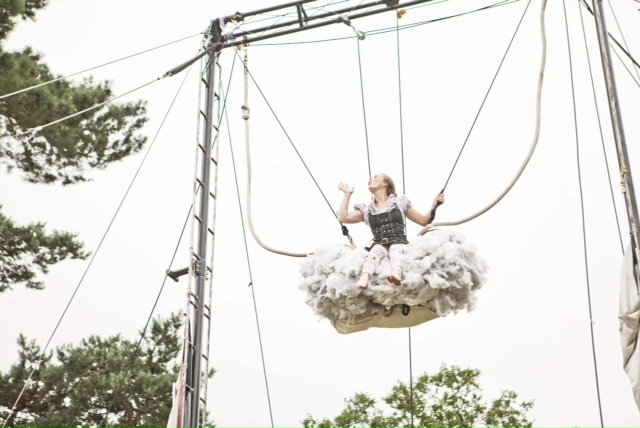 When Sarah Bird and Rowan Hoban met at a Macclesfield book club in 2008, they discovered a mutual passion for storytelling and family arts events alongside a shared experience of attending festivals with their families where the offer was often a disappointing, poor quality add-on.

Now known as Wild Rumpus, little did they know that a year later they would be putting on their own Just So Festival from scratch, let alone that this weekend they would be co-producing the brilliantly ambitious, large-scale, outdoor theatre experience The Lost Carnival in Burrs Country Park in Bury, alongside So It Is, a new producing company established by Bury The Met director David Agnew. 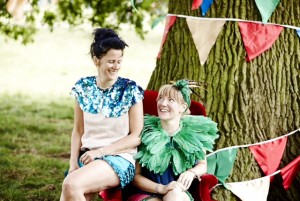 “Wild Rumpus believe in the power of a wonderful moment to change the way that a family engages in the arts together,” Bird tells me as she and Hoban explore the park with Agnew. “We immerse families in incredible stories and if we don’t give you goose bumps we’re not doing it right.

“The events that we organise take families out of their day to day lives into magical and enchanting places which can inspire, create memories and have a lasting impact.

“So we were talking to and collaborating with various arts organisations but we found ourselves talking about things that just weren’t that relevant to us. Also a lot of them are in the South of England. I can’t quite remember how we first met David Agnew but it was probably something to do with the Ramsbottom Festival and we soon found there was so much we had to discuss about family programming and arts programming at festivals.”

That was where the Northern Festivals Network, founded with the express aim to increase the amount of high quality arts for families at festivals, came from.

Just So Festival initially joined forces along with Kendal Calling and Ramsbottom Festival and has seen an additional six festivals join their cause through support from the Arts Council Strategic Touring Fund.

Larger stalwarts of the festival circuit such as Festival No.6 and Deershed, sit side-by-side intimate affairs such as Funny As Folk, Cloudspotting and Fire In The Mountain, as well as folk favourite Underneath The Stars. 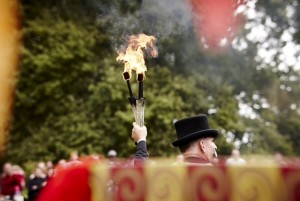 “Through doing that, we started discussing the idea of doing something else for families that wasn’t actually a festival,” recalls Bird.

“As soon as we looked up from just organizing our own festival and started collaborating with other people, it was just so exciting and the possibilities were so endless.

“We love immersive theatre, we felt that there weren’t many outdoor events that had a narrative involved and we felt that that was something exciting we could do.

“We wrote a narrative and then gave it to a theatre company we’ve worked with a lot, LAS Theatre, to work with. So they’re going to be bringing that narrative to life over the weekend, while the rest of the carnival programming, such as the acrobats, the music, the mechanical contraptions, a lot of the sideshows are going to be stand-alone independent pieces, tied only loosely into the narrative and bringing that flamboyancy and colour to the carnival.”

The tale behind The Lost Carnival – apparently once the most enchanting carnival in the world, which suddenly stopped touring in its heyday under suspicious and mysterious circumstances – can be found in the form of a fictional radio documentary podcast produced by sleuth Arthur Bird.

Families can follow the story at www.thelostcarnival.org.uk and use the podcast, archive and clues to try to solve the mysteries of the carnival themselves, before the story culminates at the live event.

That promises incredible spectacles including the world première of The Marie Celestial, a giant, walking Pan-Galactic Circus Beast. Focused around a massive, beating iron heart, it mutates with mechanical transformations, pyrotechnic effects and dynamically changing light and sound, accompanied by a cast performing aerial circus, acrobatics, dance, theatre and percussion both on board the moving structure and on the ground. Co-commissioned by the Northern Festivals Network, it premières at The Lost Carnival before going to Glastonbury, Kendal Calling, Just So Festival, Shambala, Festival No. 6 and Ramsbottom Festival. 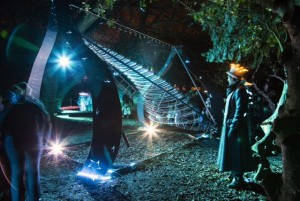 Meanwhile, The Baghdaddies are preparing their wild Balkan music, with Middle Eastern rhythms and even some Geordie touches, while Travelling Light Circus’s Pendulum Wave Machine combines technical wizardry with the genius of a Victorian scientist, and Mufti Does Games’ Live Hangman is an interactive installation, fresh from the Barbican, re-imagining the classic game as a macabre life-sized sideshow.

Surreal swing band Rum Buffalo feed off the rich antique roots of western swing and moody blues with Lost In Translation Circus tumbling through the carnival and flying through the air.

Sideshow acts include the bearded lady, Claire V’oyant and the Fear Eater.

Entrance to The Lost Carnival is timed, points out Bird, “to give that intimacy to the narrative”.

“It might sound a bit of a cliché but when you can make the audience in a sense become the event themselves then that’s really powerful. So we do encourage the audience to dress up and so on, or people can just turn up and get swept away in the carnival.”

It’s “an incredible coincidence,” she marvels, “that it all seems to match the funfair theme at the opening of HOME this weekend too.” 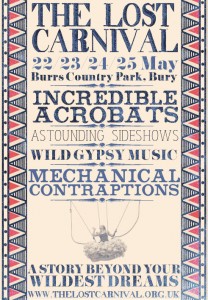 “We’re really excited just about increasing the amount of arts content at festivals, and the more festivals like No. 6, Kendal Calling or Underneath The Stars are sold on a lifestyle rather than simply music head-liners, the better it is for them. It’s exciting for artists too, increasing a market that for them has traditionally been street festivals or indoor theatres. Although there’s definitely some work that we need to do with some artists in making sure that their expectations of green-field sites are realistic and we’re very keen to support those artists in making that transition.

“I know there are already some links between venues and festivals in music programming but if we can introduce some of those links in terms of the arts programming, with theatres working with festivals and vice versa, all year round, increasing that arts availability and knowledge for audiences could be really exciting.

“We’re really privileged to be able to present ourselves at festivals to audiences who aren’t paying specifically to see that arts event and to be able to seduce them there with things that they might not normally try, perhaps sparking a life-long love of something like choral singing or circus, whether as a participant or an audience. Joining people up, that’s a really valuable, powerful thing that we feel passionate about.” 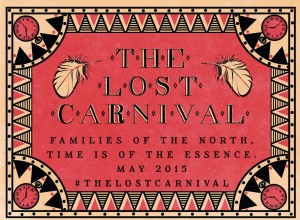 The Lost Carnival will appear in Burrs Country Park in Bury on the evenings of May 22-25, 2015. The carnival willbe open from 4-9pm, with the audience entering on timed tickets. Tickets cost £10 per person (under 3s go free). Carnival-goers should dress for the weather, and wear sturdy shoes. Tickets are available at www.thelostcarnival.org.uk.