How green is your city?

Manchester roads made all the wrong headlines last month when flooding caused a giant sinkhole to appear in the middle of Mancunian way – and then became an unlikely tourist attraction. Not surprisingly, this caused chaos for motorists and pedestrians alike, not least because the road is still partly closed. But motorists could be the root of the flooding problem.

We only have to look around to see how many front gardens have been bricked over for parking. And if we could peep over back walls without alarming anyone, we would see that, in many cases, the back garden echoes the front driveway.

Back gardens are lost in suburbia as owners reach for the minimal, low maintenance effect. When we concrete over soil we are storing up a heap of trouble and taking away a vital resource. We are creating flood plains in the heart of our homes and, when the clouds come, the rain pours and has nowhere to go. This is not an argument for bigger drains, it’s about that block driveway you spent a fortune on and the back garden with a water feature in the middle of a concrete jungle.

If we take away soil, we take away a vital part of nature that collects rainwater. One millimetre of rain will add one litre of water to a square metre of soil. A clay soil can happily take up to 81 litres of water per square metre, and that’s just for watering the plants. Yet, do our homes echo where we live? Is this simply a case of monkey see, monkey do? How much soil do we have in our cities?

In a recent stroll from Victoria to Piccadilly, after visiting the recent Lost Gardens at Manchester Art Gallery, it was clear how much green space we have lost in the heart of the city. Leaving the open airy space of the modern Victoria, flooded by light and a sense of hope that is prevalent in Manchester today, I was chucked into a gloomy roadway in front of the train station.

Trees struggle across the way hemmed in by a faux art deco building that belches over the taxi rank; even the green patch of wilderness by the hairdresser has been trodden to a dust bowl by commuters running for the tram. This worn route leads you into the open space between the National Football Museum and Chetham’s School of Music. A public space once heralded as a modern square to compliment the refashioning of The Corn Exchange into The Triangle now seems lost outside the building work being done to turn The Triangle back into The Corn Exchange. Rather than a fluid green space from Chetham’s through to the front of the Exchange we have a space that has lost its identity. Is it for the skateboarders? Is it for families? Can you play footie there? Can you tip-toe through the grass here? The answer is of course, no. Even the water rill (another water feature surrounded by concrete) ends in a shallow pond chock full of broken glass and floating beer cans. This is not paradise. This is not even a public space. It spits commuters through.

When Dig the City took over this space a few years back, they breathed real life into it, a green oasis. Then the council put the giant wheel there and bang when the green. The green oasis we crave for on Exchange Square has been slapped behind the Cathedral and Hanging Ditch. A green space beside the car-jammed, fume-filled Deansgate doesn’t scream out peace; peace here is short, asthmatic and grey.

Tucking this little piece of greenery away seems to say that Manchester is afraid of green spaces. Manchester is a great city, it is forward-thinking, it has embraced publicly-owned trams and many of the lines going out of the city are greening up nicely. But in the very heart of the city we have Piccadilly Gardens.

These pleasure gardens came about after The Manchester Royal Infirmary and Lunatic Asylum was pulled down. Placing the word ‘pleasure’ or ‘garden’ in this area today is an affront to all Mancunians. Piccadilly Gardens is a third of its original size. For the past 20 years this green space has fallen victim to ‘development’, parts of it has been hacked off for hotels and eateries. The strangest ‘development’ though is a large concrete wall. This high grey wall scares me rigid; the narrow opening funnels commuters into a landscape that is utterly terrifying due to its banality.

This ‘garden’, and that’s a word I use loosely, is devoid of any sense of community. Thanks to bad design and bad planting it has become an anti-social hotspot rife with criminal activity. The walk from Piccadilly Gardens to Piccadilly Station is devoid of any greenery although there are attempts at trees surrounded by more concrete.

But there are solutions. Community organisations such as Sow the City and Growing in the City are already greening up the industrial suburbs (and I’ll be looking at these projects soon). Maybe, just maybe, we could do the same for the city centre.

The Lost Gardens of Manchester finishes on September 13, 2015 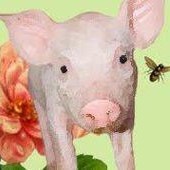