“Everyone deserves to feel safe.” Natasha Walter, director of Women for Refugee Women

Emma Yates-Badley October 30, 2017 Enterprise, It's Not Grim Up North, Northern Soul writes... Comments Off on “Everyone deserves to feel safe.” Natasha Walter, director of Women for Refugee Women

Have you ever really thought about what happens when people are forced to cross borders to seek safety?

Most women who come to the UK to seek asylum have experienced unimaginable violence – they’ve been raped, beaten and subjected to female genital mutilation – yet when they reach our shores, they often face injustices during the asylum process.

From being locked up in the women’s detention centre at Yarl’s Wood Immigration Removal Centre to trouble claiming the correct legal advice and simply not possessing the skills or language to support their applications, the injustices facing refugees are endemic and problematic. Some women don’t even have the self-confidence to tell their story or possess the evidence required to prove that they’ve suffered.

But one charity, Women for Refugee Women, is seeking to end these injustices. Set up to support women claiming asylum in the UK, the charity also publishes research documents and testimonies about what women have been through, and the treatment they receive when entering the UK, to promote change in the process. For Natasha Walter, director of Women for Refugee Women, feminist writer and human rights activist, the answer is simple: put people in the community so that they can talk and share their experiences. Everyone deserves to be – and feel – safe.

“Lots of the women that we speak to in Yarl’s Wood are survivors of rape and other gender-based violence, and they find detention really, really traumatic and it’s just unnecessary,” says Walter. “I first visited Yarl’s Wood quite a long time ago, more than ten years ago now, and at that time there were a lot of children locked up there. And because of the campaigning that happened, there are no longer children detained in the UK, so nobody under the age of 18 is locked up in immigration detention. But what we must remember is there is still a huge issue with detaining vulnerable women.”

She continues: “Their asylum claims can be processed while they’re living in the community, and we are very heartened by the way that more people now know about Yarl’s Wood. It seems to be on more people’s radar and there are demonstrations [taking place] there. People raise this issue with their MPs, but we feel like there is still a lot of work to be done to try and reform the system.” 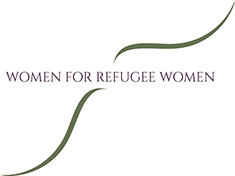 I first came across Walter during the Manchester International Festival where she took part in Yael Bartana’s ground-breaking film and performance project What If Women Ruled the World? Walters called for a way to replace established and archaic hierarchies. The premise of the play was that humanity was forced to begin again and was invited to wipe the slate clean. Grim setting aside (the play takes place during a sort-of apocalyptic aftermath), it’s an interesting concept. But, since we can’t press the rewind button, what can we do?

Well, for starters, we can use our voices. And what better way to begin than attend – and support – the National Refugee Women’s Conference, this time in Manchester, to build solidarity, energy and action? Organised in partnership with Women Asylum Seekers Together Manchester (WAST), the event will take place on November 4 at the Manchester Mechanics Centre on Princess Street, and will be full of music, dancing and performance “to lift your hearts”.

“Immigration detention is very widespread,” says Walter. “And women who come to this country to seek asylum can be locked up at any time. We’ve been campaigning about this for a while and we felt there’s also a lot of campaigning going on in Manchester and, so we were very keen to link up with the women who are working on it. So, we’ve organised this conference, and it really feels like it’s spiralled. There’s so much energy and so much interest, and what’s really heartening to see is that a lot of women who have come to this country seeking asylum, want to attend the conference and talk about how we can campaign for a fairer asylum process.

“But also, there are a lot of great supporters who want to come along and show solidarity with women who have had to come here to seek safety. So, it just feels like a good, exciting thing. At the moment, people who are working with refugees or with women’s issues, we can feel quite ground down and disheartened by so many terrible things that are happening. But we shouldn’t lose sight that at the grassroots there is a lot of activity. There’s a lot of campaigning and women coming together which is really great to see.”

Speaking about WAST Manchester, Walter says, “they’re a really great local organisation, very grass roots and run by the refugee women themselves, and we’ve been really glad to be able to work with them”.

WAST Manchester meets every week and sees lots of refugee women in the area coming together.

“They share a lunch and see how they can help one another,” explains Walter. “I think there’s a lot that women in Manchester can do to support them.

“And like the group we work with in London, they’re women who have come to this country from all over the world, mainly African countries, but also there are women in the group from Albania and other Eastern European countries who may have been trafficked here. Women from Afghanistan, Iraq, Iran – where women who are struggling for their rights. It’s a very welcoming group where women from all sorts of backgrounds can find a place they can feel safe, where they can speak about what’s happening to them, and they can start to build their confidence about campaigning.”

Alongside the refugee women speakers, the conference has also attracted a number of high-profile names.

“We’ve got supporters like Baroness Shami Chakrabarti – she’s ex-director of Liberty and a member of the House of Lords, and is currently publishing a book about women and feminism – and the local MP Kate Green, who has been very supportive of asylum-seeking women. And really what we want to use the day to do, is try to build more solidarity and confidence among women campaigning – particularly those campaigning about detention – and to try and raise the issue that there are a lot of women locked-up in Yarl’s Wood detention centre who aren’t criminals.

“They’ve come to this country to seek safety. A lot of them are survivors of human rights abuses, so detention is traumatic. But also, we’re interested in campaigning around other issues particularly destitution and poverty among asylum-seeking women.”

The conference isn’t simply a place for women refugees to meet and share experiences, it’s an arena to initiate change. 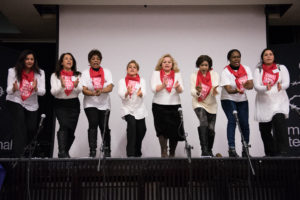 “It will be 100 years since women got the vote in the UK, so it feels like a good moment to say that parliament needs to be thinking about all women in the UK – whether or not they have the vote because they are new arrivals here – because they still need our protection and we still need to think about whether we are treating them humanely.”

“We are publishing new research,” continues Walter. “Which is about the situation for women in Yarl’s Wood and looking at what’s happening now.”

A year ago, the Home Office agreed that victims of gender-based and sexual violence shouldn’t be detained. “We’re looking to see if anything has changed,” says Walter. “And – sneak preview – we’re saying that nothing has really changed.”

For more information, or to book tickets to National Refugee Women’s Conference, click here. To find out how to donate or support WAST Manchester, click here, and Women for Refugee Women, visit their website.