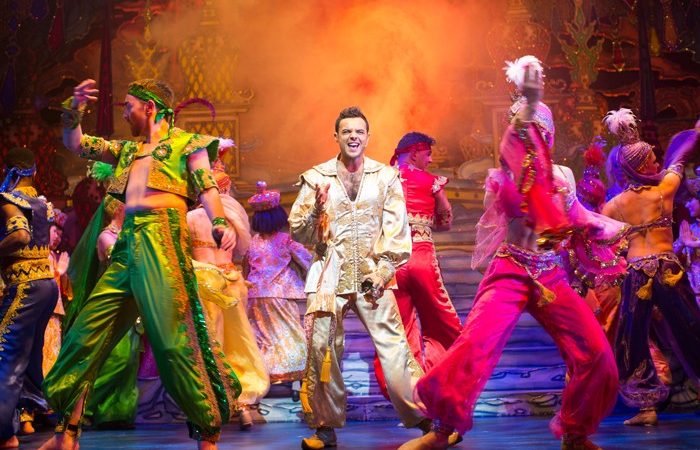 There were ructions in the pantomime world this week when it emerged that reality TV star Stacey Solomon – currently appearing in Dick Whittington in Milton Keynes – was holding a clipboard with her lines on it throughout her performance as Fairy Bowbells.

It’s an age-old problem. Theatres are understandably eager to cast big names and thereby get families of bums on seats, but panto itself is a very particular skill. You’ve either got it or you haven’t, and to make it shine you really need to give it your all. Often the very best proponents of the form have never appeared on I’m a Celebrity.

The annual pantomimes at Manchester Opera House have a solid reputation, with panto maestro Eric Potts as regular writer, director and Dame. This year he’s back holding the reins for Aladdin. Elsewhere in the cast, there’s an attempt to strike a fine balance between star names and seasoned specialists. Aladdin himself is played by former A1 singer Ben Adams, who can’t be faulted for effort, but nevertheless lacks that certain twinkle. Loose Women‘s own Sherrie Hewson, as the Genie of the Ring, can pull off this sort of thing effortlessly, and to be honest, at times she seems to be trying to do precisely that. John Thomson of Cold Feet fame plays baddie Abanazar with some relish, but Thomson is fundamentally an eminently likeable sort of chap so the constant volley of boos doesn’t quite suit him (he’d probably make a fantastic Dame in the long term, mind). 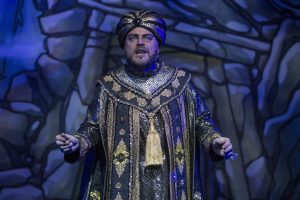 Potts’ script is heaving with gags older than The Arabian Nights, and often on the saucy side. However, it really takes flight with the set-piece routines dotted throughout, including an irresistible bit of business with a half-heard phone conversation and – yes – the Chinese laundry scene. Actually, the whole thing becomes much lighter on its feet in the second half once the plot’s up and running, and there’s room for more dancing, singing and larking about. Top marks here for the bitter-sweet inclusion of Prince’s Diamonds and Pearls when Aladdin hits the jackpot. Justin Timberlake’s Can’t Stop the Feeling! pops up too, which appears to have been an early Christmas gift to panto-makers right across the land (if anyone can find a festive show this year that fails to include it, inform us at Northern Soul and receive a complementary magic lamp).

Really, this production is at its best when it simply strings together daft things for the cast to do, whereupon they all gel and start to shine. In particular, Potts as Widow Twankey is an absolute dab hand and knows precisely what he’s doing with this kind of material. So too does Neil Henry as Wishee Washee, a natural performer with boundless energy and well-deployed magic skills to boot.

So who is the real star here? Is it the star names or the pantomime experts? Ultimately, of course, it’s the show as a whole, and when that kicks into gear properly it works a treat. Overall, perhaps, its slick, lavish showbizzy feel comes at the expense of more purely organic, freewheeling delight, but it still manages to be loud, brassy, interactive and hyperactive seasonal entertainment.

Aladdin is at Manchester Opera House until January 8, 2017. For ticket information, click here.