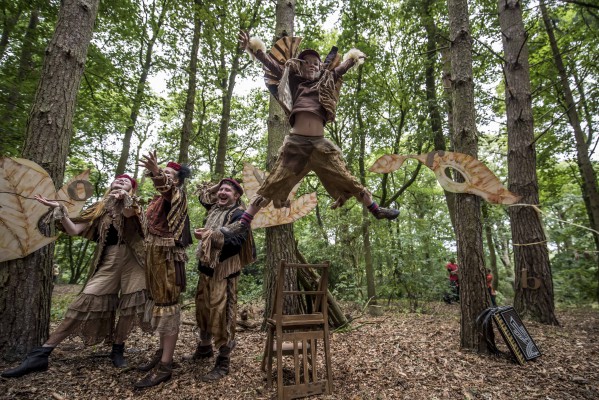 Where to start. This is the hardest of reviews to write because I really don’t know what to tell you about the weekend we’ve just had. 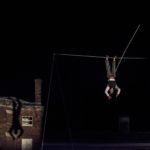 A simple list of the things that my family and I did within the space of less than 72 hours at the Just So festival would fill my word count, but here is an edited version: danced round a maypole; stuck clay models to trees; participated in a mass pillow fight; watched genuinely funny child-friendly comedy; read poetry out loud on a woodland stage; sang songs and watched madcap science experiments around a campfire; did Bruce Lee-style martial arts dancing; rocked out to a song about a disco-loving teddy; walked on custard. Oh, and paraded around a Cheshire estate dressed as lions along with hundreds of others of elaborately-attired festival-goers from seven animal ‘tribes’ as part of the raucous finale to a weekend-long extravaganza of good-natured rivalry. 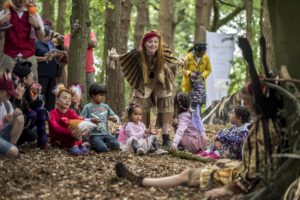 I don’t know whether to tell you about individual performances, such as the beautiful Lost Words: Seek Find Speak, a theatrical adaptation of Robert MacFarlane and Jackie Morris’s lovely book The Lost Words, performed under the trees, or Perhaps Contraption’s exuberant jazz/ punk/ rock mash-up on the Footlights Stage. The Bullzini Family’s jaw-dropping high wire performance was a demonstration of world-class skill that deserves a review of its own. But there isn’t space for that, so perhaps I should focus instead on the big picture – an extraordinarily warm, friendly gathering of families in a beautiful country setting. The children exploring and imagining, the adults unselfconsciously dressing up and singing along, and the performers and organisers interacting with the punters and oozing genuine enthusiasm and love for the event. 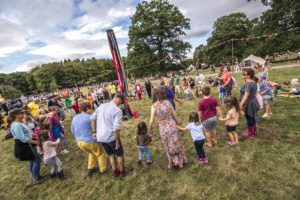 Or maybe I should focus on the ludicrously small details that might have turned me into one of the many disciples of this festival that return year after year: the reusable beer cups; the baby bath time and breastfeeding tent (I don’t have babies any more, but what compassionate genius); the non-saccharine moment when my children were asked by their tribal leader (a woman in a lion outfit with whom they had fallen completely in love) what they were most thankful for about the weekend.

Lord knows the whole thing was exhausting. I wouldn’t even say that it was all fun. My young daughters were at times overwhelmed, and insistent on racing between activities in a manner that stopped anyone enjoying them. But that is because their brains were on fire with ideas and excitement, and because they were so completed immersed in the Just So universe that my three-year-old refused to wear her coat when it rained because “I’m not cold, lions are furry”. I suspect it will take them a little while to process everything they saw and heard at Rode Hall. I also suspect that the memories that we all generated there will float to the surface, and be the subject of family conversations, for weeks, months, and years to come. 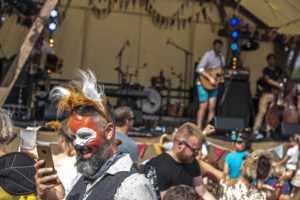