It is the fate of Golda Rosheuvel that her gender will be the first thing that many people comment upon when critiquing her performance as Othello. That is not unreasonable – hers is the first female incarnation of the iconic role in a major modern British theatre, and the first interpretation that transforms the Venetian general’s romance with Desdemona into lesbian marriage.

But, this change does not dominate Gemma Bodinetz’s production. Yes, Rosheuvel’s sex and sexuality add additional layers of difference – ‘The Moor’ was always an outsider, but here, as a gay woman in charge of an army on a modern-day Cypriot base, she is that many times over. But such is her ease in the part that the innovation of her playing it does not feel contrived. Rosheuvel’s Othello is in fact, in some senses, quite a traditional one; full of jealousy, wounded pride, pigheadedness and passion. Despite being shorter than her svelte Desdemona (Emily Hughes), Rosheuvel somehow dominates her physically, bringing a sense of menace as her plans for bloody revenge develop into a compelling final scene. 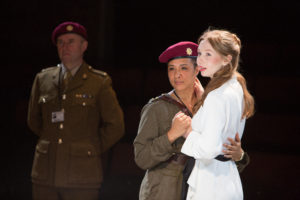 It is also the fate of Everyman Company productions to be compared against the rest of the season. That is the joy and the curse of rep. After the innovative staging of A Clockwork Orange, a virtually non-existent set for Othello’s first half felt like the theatre failing to play one of its trump cards. There was a little more to work with after the interval, with twinkling lights overhead and an atmospherically-shrouded bed on which the narrative reached its dramatic finale. But, perhaps deliberately, it was the acting that was centre-stage here. 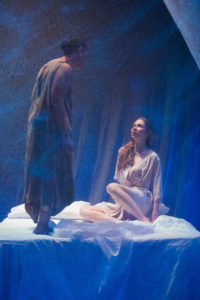 Patrick Brennan was suitably malevolent as the scheming Iago. Marc Elliot brought a little light-relief as a feckless Roderigo and Emily Hughes was both alluring and exasperating as a coquettish Desdemona. It was Rosheuvel’s show, however, particularly once the general took command of her troops and lost control of her personal life in the second half. Bodinetz has made modern parallels between the plot of Othello and the problems of fake news, and the ability of viral rumours – just like Desdemona’s lost handkerchief – to destroy reputations and relationships.

These are interesting ideas, but what struck me most was the universality of Shakespeare’s story about individual people; their need to belong, to love and yet to dominate. Straight, white and male or black and lesbian, the various characters in this tragic mess were all too human.

Othello runs at the Everyman, Liverpool, until July 10, 2018. For more information or to book tickets, visit the website.