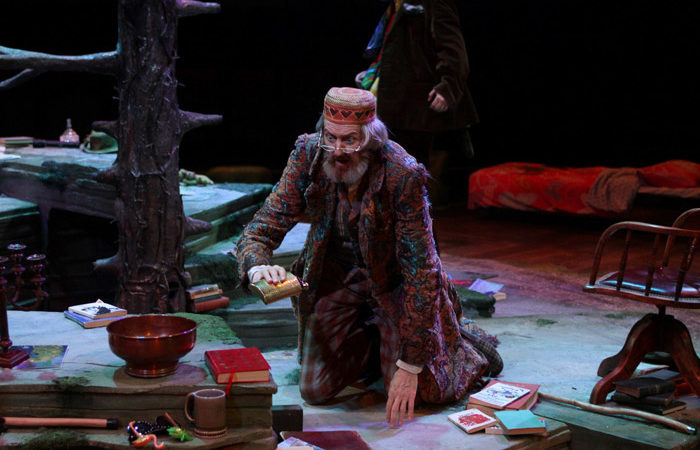 You can’t escape from stories these days. The thing that brands and businesses once called marketing is now called ‘telling our story’, and there isn’t a burger bar, coffee shop or beard oil outlet that doesn’t come with a neatly packaged narrative attached.

Such is the power of a well told tale. Or even a bum-clenchingly awful tale about ‘our passion for making awesome smoothies’ for that matter.

Fortunately, there are no such sphincter-tightening attempts at storytelling in The Story Giant, the third production in the Everyman Theatre’s current rep season. In this family show, adapted by Lindsay Rodden from Brian Patten’s original book, we are treated to a succession of stories that are, for the most part, engaging, touching, intriguing and often funny.

They are stories with their roots in a range of global folk traditions, from the unsettling tale of a Dartmoor farmer through to an ancient fable about a jackal and a drum found in the Indian Panchatantra collection.

In Patten’s book, which serves as both an anthology and a novel, these traditional tales are bound together by a narrative in which four children from different parts of the world come together in a communal dream. They encounter a mysterious old chap called the Story Giant who has collected every story in the world except one. If he doesn’t find the elusive tale soon, his castle and library will crumble away and all his stories will be lost to the world.

In an attempt to avert this disaster, the children tell story after story from their own homelands in the hope that they will hit on the one never before heard by the giant. There is Hassan from Syria, Rani from India, Betts from Los Angeles and Liam from Liverpool, and in the process of relating their tales, they discover common ground in the pleasures of artfully shared fiction.

The challenge facing writer Rodden and director Matt Rutter has been to turn an unavoidably episodic narrative into a piece with enough dramatic momentum to sustain a two-hour theatre show. Initially this proves difficult, as the stop-start nature of the storytelling keeps dragging things back just as the production gets moving. Despite some engaging performances – from Melanie La Barrie as Betts and Tom Kanji as Hassan in particular – the energy seems to dissipate each time a story reaches its conclusion.

However, as the children’s characters develop and their relationships warm up, the play starts to coalesce into something that feels much more focused and satisfying. The second half is excellent, with the four children feeding off their own shared energies and creating a genuinely touching bond with Richard Bremmer’s gentle, rapidly fading, giant.

Whereas the two previous shows in this Everyman rep season have been bare stage affairs, this production adds a simple but effective set that helps to engage younger members of the audience. It is primarily a children’s show after all, and the drooping branches of a stylised tree add a little spectacle while creating a canopy under which we can all remember the joys of sitting and listening to a story.

Some ethereal music by the Liverpool-based composer Patrick Dineen adds to the magic, and by the time we reach the tale’s final page, we have been reminded that storytelling has the power to helps us understand what it is to be human, and isn’t just the latest trick in an ad agency’s book.

What: The Story Giant