Williamson Park in Lancaster is one of the most beautiful parks in the country. On a slope to the west of the city, it has been landscaped to create wooded dells, walkways at various levels, open grassland, a boating lake with cliffs behind and, at the highest point, a perfect example of Edwardian baroque – the Ashton Memorial. This sounds like a stele but actually is a large domed building some 150 feet high with rooms and a large piazza in front, built in the park he gave to the city by linoleum multimillionaire James Williamson, 1st Baron Ashton, in 1909 as a memorial to his second wife. The views over Lancaster and Morecambe Bay are stunning.

Every year since 1987, The Dukes has put on productions here in the Summer, using the landscaping to great effect as the action moves around the park and the audience follows. The theatre started with A Midsummer Night’s Dream which is not only obvious but perfect, and carried on with Shakespeare until the turn of century when family audiences became the sole focus. I’ve seen several shows in the past few years and it’s always a great outing. An hour and a bit up the motorway, you get to the park before you reach the city centre, and best of all you pass a Booths supermarket along the way – the perfect place to pick up a picnic. 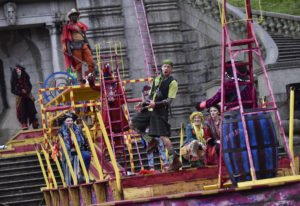 Following the pre-show, the production starts in the children’s playground where we watch as a rather unhappy young Jem Hawkins (Natasha Davidson) is sent to a charity shop with a box of stuff from the attic. Life’s a bit miserable for Jem, but she finds a copy of Treasure Island in the box which used to belong to her Uncle David, a traveller. That cheers her up until her cat, Belle, persists in scratching at the cover, only to reveal a hidden treasure map…

From here on in things get a bit complicated. Pirates start appearing all over the place, Uncle David (Niall Costigan) arrives and identifies the map as one given to him by the notorious pirate Billy Bones showing where he buried his treasure, Jem gets very excited, and then an accordion-playing pirate is given the black spot (doled out for pirate-on pirate-crime) and is summarily sent to Davy Jones’s locker. Needless to say, Jem shuts up about the map before she suffers the same fate.

I don’t want to give away too much of the plot and how The Dukes tackles this much-loved story, suffice to say that Long John Silver (Jake Norton) appears complete with parrot and the cleverest wooden leg I have ever seen (you can’t run around Williamson Park with your calf tied to the back of your thigh and knee strapped to a wooden stump, which is how it’s usually done), we meet Captain Molly (Victoria Brazier) and first mate Israel Hands (Chris Jack), and are taken on a voyage of adventure.

Eventually, the play resolves itself at the boating lake, including some impressive sound effects (I thought there was thunder from a blue sky as I felt it shake me), and several hundred people head home having been thoroughly entertained. 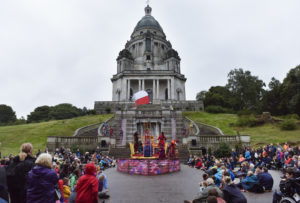 It was all very jolly. There were some decent songs, and the technical crew did their usual exemplary job. They spend a week rigging the park with lights and sound before the opening, and it’s all controlled from an amazing Heath Robinson-style vehicle which trundles ahead of the audience. But, and I know you can hear the but, I missed the jeopardy. There’s loads of jeopardy in the story of Treasure Island, but here it had been sort of comedied away. In discussion afterwards it was suggested that maybe plays for a family audience can’t handle a lot of peril, but I beg to differ. Kids love a bit of risk, and without that, where’s the relief? Where’s the redemption? It’s the jeopardy that keeps us wanting to know what happens next. The Dukes’ production of Hansel and Gretel in 2014 had loads of edge-of-your-seat stuff – and it worked.

To catch and then keep the attention of the audience, the play in the park needs to stop us from looking at the surrounding beauty and thinking about that last sandwich in the picnic basket. For me, Treasure Island, despite excellent performances all round, didn’t quite do that. Director – more jeopardy please. 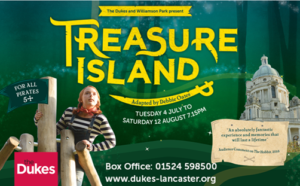