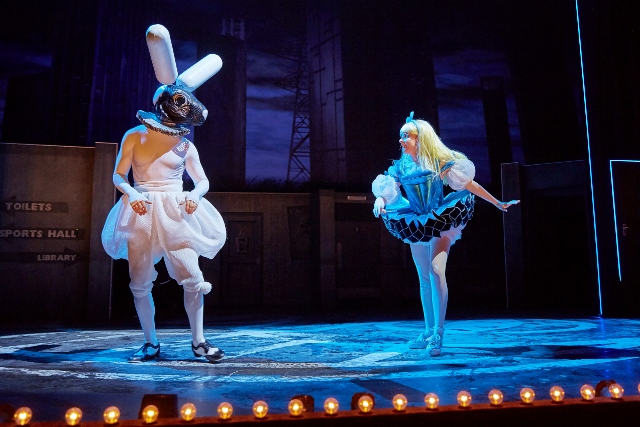 Manchester International Festival’s USP has always been the creation of original, new work – premières which then carry the brand around the world, at least in theory. This bold attitude has led to some remarkable triumphs over the years and some unique events for Manchester.

Even so, there are some recurring figures and one of them has been Damon Albarn. His Demon Days Live show was actually MIF’s very first trailblazer event, while his ambitious opera-esque production Monkey: Journey To The West opened the first MIF in 2007 with Dr. Dee following in 2011. He also provided the music for Punchdrunk’s brilliantly disturbing It Felt Like A Kiss. 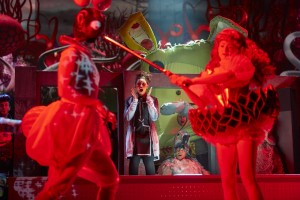 This time around he has reunited with the National Theatre’s director Rufus Norris, also the director of Dr. Dee, for a dizzyingly crazy musical take on Lewis Carroll’s classic Alice in Wonderland. As the title indicates, though, this is an Alice for the digital age.

Albarn and Norris have been joined by the acclaimed writer Moira Buffini, who provides the book and lyrics, observing that Alice In Wonderland is “one of those stories that works on our subconscious and you can make mean different things according to what you bring to it. It’s endlessly re-inventable”.

Thus wonder.land (at the Palace Theatre) twists back and forth between superficially dull, day-to-day reality – broken marriages, school bullying, addictive behaviour of various sorts and even identity theft – and the heightened day-glo ‘reality’ of a computer game called wonder.land, created with high-tech visuals and some truly striking sets and costumes, courtesy of Rae Smith and her team.

In the playful yet creepily menacing world of wonder.land, presided over by the distinctly threatening figure of the Cheshire Cat, attractive and ‘princess-like’ (significantly, she’s also white) Alice (Rosalie Craig) is the online avatar creation of insecure mixed-race schoolgirl, Aly (Lois Chimimba), led on a quest by the mysterious White Rabbit (Rob Compton), whose choreography bears the strong stamp of Javier de Frutos. There she meets strange but mostly friendly creatures such as the especially John Tenniel-inspired Dodo (Ivan De Freitas) and the wacky-baccy-smoking caterpillar (Hal Fowler). This contrasts with her ‘normal’ life where she’s constantly bullied at school and online, and where the sundered relationship between her mother Bianca (Golda Rosheuvel) and her online-gambling addicted father Matt (Paul Hilton) only gets more and more fractious. 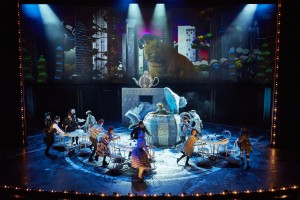 But things get even worse for Aly after headmistress Ms Manxome (a splendidly sinister and scene-stealing Anna Francolini, seen not long ago in the Royal Exchange’s That Day We Sang) confiscates her mobile phone and starts playing the game for herself. Her transformation into the Red Queen is one of the most impressive and coherent strands in a show which mostly revels in its own anarchic approach, and can suffer for it in places.

There is also a strange, although not entirely inappropriate, tension in the production between child-like innocence and a much more knowing adult approach. There were sniggers, for instance, both for Dee (Sam Mackay) and Dum (Sam Archer)’s fart jokes and when a song called Everyone Loves Charlie was rolled out, while Matt often seemed to be rolling out the barrel in his own lost Lionel Bart musical, complete with songs designed to induce a mass knees-up.

But mostly the music was pretty dull, and, even with the production’s impressive sets and a wonderfully crazy premise that, overall, it makes entertainingly believable, this is the show’s essential problem.

Can it be fixed before moving on to London’s National Theatre and the Théâtre du Châtelet in Paris? Almost certainly, I would say, and in the meantime there’s already plenty to be enjoyed and chewed over in a production that’s another admirable first for Manchester International Festival.