Sunday Lunch at The Grill on the Alley

As a chef, reviewing a restaurant can be a bit of busman’s holiday. More often than not, it’s actually a chance to view interior decor, menu styles and, most obviously, the food. And, with the influx of new eateries in Manchester of late, there are plenty of places to visit.

Celebrity chefs have made their mark on the Manchester dining scene recently, among them Jamie Oliver, Aiden Byrne and Simon Rogan, to name just a few. But the most significant thing to happen to city centre food is Living Ventures. The Knutsford-based company owns a slew of restaurants and bars including Australasia, Manchester House, Artisan and The Alchemist. They also operate the Blackhouse group, a brand which focuses on steak and fish. There are two of these in Manchester, one of which is The Grill on the Alley, just off Deansgate.

It was a beautiful sunny day (remember those?) when I visited The Grill on the Alley (stopping on the way to discover that Peter Maturi, a damn fine cook shop on King Street, had gone into administration). You’d expect to encounter a bit of shade when stepping from a bright summer’s day into a restaurant but the lighting was overdone – all super strong spotlights, not massively conducive to a relaxing Sunday lunch. 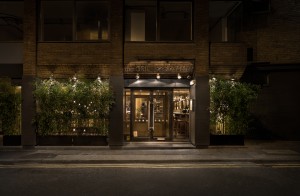 Still, the menu proved to be extensive without being daunting. A large section on steak had pretty much all you could want – everyday meals like steak-frites and flattened rump, before moving onto a list of cuts to choose from, including a £55 Wagyu fillet. This king of steaks comes from cows reared on beer diets which are massaged from birth. ‘Lucky cow’ as the menu put it.

I chose foie gras with a spiced pineapple chutney followed by the Sunday roast beef while my partner went for crispy calamari with lemon mayonnaise, again followed by the roast beef. We both opted to have the beef pink – and it was nice that a Sunday lunch menu gave you a choice between that and well done. Both of us had a Peroni Red. Neither of us had tried this lager before but it was a pleasant surprise – a touch lighter and a little more delicate than the usual Nastro Azzurro. The only downside was that it wasn’t that cold, a theme which ran throughout our drink choices during the meal.

While waiting for our starters to arrive I took the time to review the wine menu. It was extensive and decently-priced but you could only buy red by the glass up to medium-bodied. If you wanted a full red, more complex or mature, you had to buy the whole bottle. I found this a little disappointing.

Surprisingly, the wine menu did feature three English wines, all from the Chapel Down estate in Kent and all available by the glass. We tried a couple and were impressed; they were only let down by the tepid temperature.

When our starters arrived the presentation was beautifully simple; nothing crowding the plate just well-presented food and correct portion sizes. I was curious about the spiced pineapple chutney and sampled a small morsel – holy crap, it was one of the best tastes ever. Just unbelievably good and, paired with the foie gras, was a delight to eat. I wolfed the lot enjoying every last bit. My partner’s crispy calamari was just that – crispy, tasty and not chewy. Calamari is so easy to get wrong and can be a horrible experience if done badly. But  it was clear that these chefs could cook and knew their stuff. 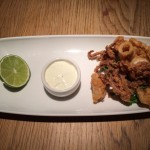 And so onto the main course. We’d seen some roasts coming out to other diners and were impressed by the size of the Yorkies. When ours arrived they didn’t disappoint; easily the largest Yorkie I’ve ever had in a restaurant, served with two thick slices of beef, a few roast potatoes and gravy filling the plate. Side dishes of carrot and swede crush and spring greens arrived separately. We ordered extra gravy and horseradish sauce and set about filling our stomachs. We’d only managed one mouthful and our extras hadn’t even been delivered when a waitress was asking if everything was OK. Now, I know this is an important aspect but it was far too early into a course. Not a massive issue but a bit over eager. 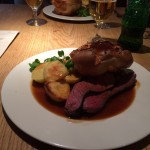 This was soon forgotten as we got back to the food, to those delicious crispy roast potatoes, perfectly-cooked beef, massive Yorkies and proper homemade gravy. It was heaven. Everything was seasoned correctly and, when we ordered more beers, they arrived with glasses of iced water to replace the two empty ones on the table (a nice touch, you’d normally have to ask again). We were pretty full by now but I decided I couldn’t in all consciousness leave without taking one for the team – so I tried a dessert along with a glass of dessert wine. My dining partner decided to bite the bullet and try one too.

We both ordered apple pie with a Lancashire cheese crust and ice cream, along with a couple of glasses of Muscat de Beaumes-de-Venise. Our dessert wine turned up first, beautifully sweet but not sickly, followed by the apple pie which was garnished with a sprig of mint. This kind of decoration seems compulsory for some chefs but I’d prefer a fruit garnish or a chocolate decoration. In any event, the dessert was a little disappointing. It needed more sweetness in the filling.

For a fee of £12.95, the Sunday roast option was extremely good value. But as we’d filled our boots with lots of other delicious morsels, we barely managed to roll onto the Metro and home. 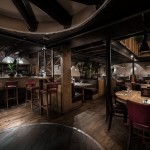 Chef Tony says: Good service but a bit eager at times. However, the food is really, really good.

For more information about The Grill on the Alley and its Sunday lunch menu, follow this link: http://blackhouse.uk.com/menu/sunday-roast