It’s unusual to go more than a few days without hearing about the war in Syria, either in the news or as part of an appeal for humanitarian assistance.

But beyond the headlines, I’d wager most of us don’t truly understand what’s going on. Imperial War Museum North (IWM North) is seeking to provide clarity on this in its new exhibition Syria: A Conflict Explored.

The opening words of Syria acknowledge the challenge of describing a live conflict without bias or agenda, but objectively.

And so, to the facts. Wars are often counted in numbers and the stats for Syria are shocking – almost half a million people have died and more than 11 million have been displaced from their homes in a conflict that has already lasted longer than the Second World War.

The exhibition’s introductory video sets out clearly the background to the conflict – the context of the Arab Spring and how what began as civil protest escalated into all-out war. Simple graphics show plainly and clearly who is fighting who and which countries are now involved. In a separate section, visitors can listen to an academic answering frequently asked questions about Syria and the subtleties of the war there. 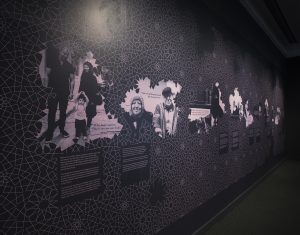 So far, this exhibition could be a website or an online resource which is viewed remotely. But IWM North has also remembered the reason people visits museums in the first place.

Museums are places where we expect to see objects – real things. A challenge facing any museum making exhibitions about conflict is the lack of material things available. Wars tend to destroy and, given the security situation, it’s not as if IWM North’s curators can wander the streets collecting stories and objects as they go.

They have, however, managed to acquire and present some objects by working with individuals and groups on the ground in Syria. A lifejacket, a helmet, a street sign and a newspaper have all been loaned to the exhibition. Although only a handful of objects are present, it’s these tangible remnants of the conflict that are among the most powerful – brought from a live war zone to a museum in the UK for us to view.

These things are what make an exhibition different to reading a news story. As museum visitors shift from thinking intellectually about the war – learning who is fighting and why – to thinking more emotionally about conflict. Personal stories from Syrian civilians are presented, explaining how their lives have been affected. The harrowing tales of childbirth during air raids and of family members lost, assumed dead, make for difficult reading. 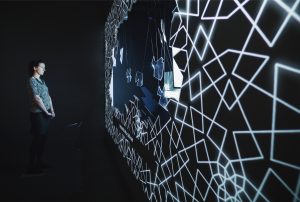 Images by documentary photographer Sergey Ponomarev invite us to go even further with this emotional engagement. Instead of a calm, rational explanation of conflict, these photos ask us to confront civilians and armed forces face-to-face. This a war that is shaping lives, right now. Today.

So, while IWM North has succeeded in its task of explaining the conflict in clear and simple terms, it also encourages us to take the next step. It asks us to move from engaging with our minds to engaging with our hearts.

It’s worth noting that, compared to the size of the conflict, this is only a modest exhibition and serves best as an introduction to the Syrian civil war rather than as a comprehensive guide. If you’re looking for an in-depth account of the war, the IWM North’s bookshop has plenty of accounts and tomes that will satisfy the avid reader.

Syria: A Conflict Explored is on at the Imperial War Museum North from February 16 until May 28, 2018. For more information, click here.