There are a handful of Corrie favourites mingling as I head to a hidden archway under the Deansgate / Castlefield Met to celebrate the launch of Manchester’s newest play. Part of Queer Contact, The Newspaper Boy is a semi-autobiographical production from Chris Hoyle who, in the mid-90s, was cast as a newspaper boy in Coronation Street aged 14, only to find himself splashed across the tabloids a year later after being caught in possession of cannabis.

And so, we meet Christian Dibmore; a working class 15-year-old who’s landed a role in the nation’s favourite soap, Mancroft Walk. When he befriends his on-screen girlfriend Mandy, Christian is introduced to Manchester’s gay scene, drugs, and her half-brother Max, and the two soon start a secret affair. Caught out by the tabloid press, a gay underage sex scandal ensues, and Christian suddenly finds himself facing up to difficult conversations at home, hounded by the media, and afraid to return to school.

Chris Hoyle does an excellent job of pulling together multiple themes; coming out as a teenager in the 90s, growing up in the public eye, falling in love, being a working-class kid suddenly earning more than his single mother.

For me, the star of the show is Christian’s nan, played by Karen Henthorn. Chain-smoking, fed up of the ‘tory twats’ and incapable of working a VCR, she is the relative you seek out at a family gathering to cause mischief with. Yet, behind the brash exterior, there is a softness where she tells Christian that, in the wake of the scandal, she is proud of him.

You can tell that details surrounding the set and wardrobe have been carefully considered here. Christian’s wet-look curtain haircut, iconic adverts interspersed between scenes (who remembers the blue car vs red car Milky Way ad?) and copies of The News of The World all act as a reassuring nod to growing up in the 90s. Poignantly, it also reminds us that 1992 was a time when the age of consent for gay men was still 21.

And what of the venue? I must say, I had slight misgivings that 53Two, located in the archway and former home of car showroom Bauer Millett, would have fallen into the trap of other city conversions. The industrial warehouse turned coffee shop, adhering to the uniform of exposed brick, mismatched furniture and copper gold lighting.

While 53Two has many of those same features, you don’t feel that it’s been deliberately fashioned that way. There is something authentic about it. A chaise lounge that felt like it might collapse at any moment, a piano in the corner that looks like it actually gets played, and Adnams ale on tap at the bar.

If a venue like this can keep on putting productions like that, it won’t be long before 53Two claims its place as Manchester’s newest and best hidden gem. 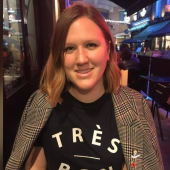 Review: Around the World in 80 Days, The Lowry, Salford