How do artists mount virtual exhibitions? We go behind the scenes of GALA at Manchester’s Victoria Baths

Helen Nugent April 29, 2020 Art, Arts Comments Off on How do artists mount virtual exhibitions? We go behind the scenes of GALA at Manchester’s Victoria Baths

COVID-19 has stopped many of us in our tracks. The pause is palpable in the streets. Many of us felt a need to be still. While there was still work to be done, the will to do it and carry on was largely absent. Anything I was doing before felt meaningless in this new reality.

Earlier in the year I was invited to assemble a group of artists to exhibit work as part of SpringFest at Manchester’s Victoria Baths, an event that marks the start of open season for the baths when life returns to the building with weddings, fairs, festivals and tours. Unfortunately, like everything else during these strange and challenging times, it was shelved.

But Mark Devereux of Mark Devereux Projects (MDP) felt compelled to do something useful so he shared the work I’d already made and it blossomed from there. Gwyneth Brock, fundraising and marketing officer at Victoria Baths, encouraged us to find a way to make it happen and we started to think of ideas as well as how to help the baths which, like many other community-led projects, faced an uncertain future. Within a couple of weeks we reassembled as a collective (using Zoom) to challenge ourselves to think about presenting the work in a new context.

What are the limitations (and opportunities) of taking an exhibition online?

We thought about what we would normally do, or receive, from an exhibition that might not translate digitally. This included meeting people, interacting about the work and having physical space in which to showcase pieces. We also had to think about the medium. How would the work be presented? Which online platform would we use? 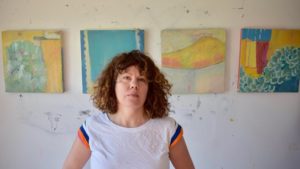 Last year, three of us undertook a residency at Victoria Baths, so we each referred to our research, ideas and materials archived from that period and, of course, our memory of spending time there. Although the remaining artists have all visited the baths, they had not been able to attend to research this project. Did this give me, Donna Wood and Patrick O’Donnell an advantage? Or could this enforced distance serve the others better? What happens when we can’t experience the thing first-hand? How do we rely on secondary, mostly digital information?

The two sculptors, Aarti Pandey and O’Donnell, faced limitations in showing sculptural pieces and were the first to go back to their original ideas. “Since a 3D object not only occupies space but changes it by its very nature of being, when the 3D object is viewed in a 2D space it is limited to the scale of screen,” Pandey says. “It is viewed from one angle rather than experienced. The difference is as vast as meeting a person or looking at their photograph.”

Early on, Pandey and O’Donnell decided they would record a conversation about their process. Meanwhile, 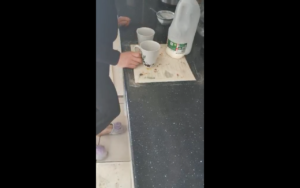 Kevin Boardman’s response has been to use isolation in his Manchester flat as a testing ground for mark-making (a term used for the creation of different patterns, lines, textures and shapes). He is taping tile-shaped paper to surfaces including his kitchen worktop near the kettle, in his bath and on the kitchen floor to capture marks and turn them into artwork including prints. It’s his way of researching and exploring the idea that the tiles in the Victoria Baths will each have their own story to tell and become unique by the fact of being old and used, evidenced by cracking, chipping and a century of wear and tear.

At first Suzanne Bethell felt she couldn’t get her head around it and decided to withdraw from the project. But after disappearing into her studio for a couple of days, she felt able to re-join. “I was due to visit the baths and then lockdown happened. I lost the confidence to be able to respond from secondhand information and I also think I felt how most people felt at this point. After I had decided to bow out, the ideas just came to me. I started a few days later and I’m still making work. I have used the distance, I think. The baths were a starting point, but my work has taken an unexpected turn and I feel like I’ve painted a response to the colours and the tiles in a contemporary way.”

At this point I had already produced a series of four square oil and acrylic paintings for the project. I used the scant information collected from my residency at the baths in 2019 – drawings I made which included little technical information but recorded light and colour from different viewpoints from the depth of the pool and the height of the balconies. I also possessed lots of sketchbooks full of drawings of the baths made by members of the public during our exhibition. These references, along with my (fading) memory, offered a way into abstraction that helped me to describe my feeling about the space, the absence of water and what swimming pools represent. I also thought about what it might have meant for the people who used to visit the baths. I went on to paint four more using oils and paper this time. These paintings made in isolation look different from the first four.

Sophie Nixon paints urban Manchester and images of architecture and quiet cityscapes. Prior to the lockdown, she was working out of Hope Mill as part of a residency at Comme Ca Art and had already painted tiny homages to scenes of Victoria Baths. In her series of oil paintings, Nixon has mastered the beautiful light coming through the ceiling glass, the period details and the sense of solitude she felt in those empty upstairs rooms in the superintendent’s flat.

Bethell, Nixon and I, despite being unnerved by the thought of appearing on screen, each decided to make a film about our work. We all found talking into thin air deeply disconcerting because, when we talk face-to-face with people, we like to hear what others read in our paintings and read subliminal cues. “As a traditional oil painter, I have found this move to online extremely challenging,” says Nixon. “[This is] magnified by feeling remote from the other artists involved in the project while filming.” 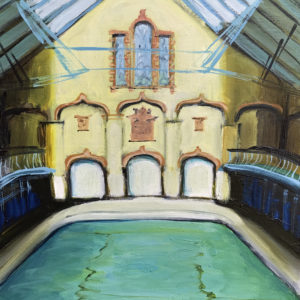 Having painted large semi-abstracted canvases at the baths before, Wood continued to focus on colour and pattern in smaller paintings, reflecting how the smaller scale affected the way she responds to the tiles and the coloured light from the stained-glass windows in the Turkish Baths. Formerly a documentary film maker for the BBC, Wood uses film as part of her art practice. In response to continuing her work digitally, we will be showing some of the films she made during her last residency at the baths. In Sea of Clothes we see her swimming in a bedroom full of garments and accessories to highlight the true cost of disposable fashion on the environment. Water Therapy is inspired by the aerotone (precursor to the jacuzzi) in Victoria Baths. Water therapy was originally developed for the treatment of arthritis, but in her film Donna explores how the jacuzzi and the hot tub has become glamorised in contemporary culture.

Pandey and O’Donnell are both responding with film – Pandey from the perspective of her Indian heritage, and as a woman responding to the gala pool’s original intended customers, the ‘First Class Males’. She uses a male head (her own piece of sculpture) as a starting point. O’Donnell is developing a digital intervention which has echoes of his residency installation which transformed a set of concrete modernist cubicles in the female pool into an aquarium, brought to life with light and paper cut-outs of aquatic life forms. 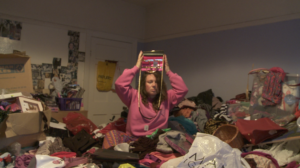 Having experienced being a digital content maker for an intense few weeks, I’d like to lose the screen headache. Although digital art will flourish, there is no comparison to making with our own hands and viewing it in the flesh. When this is all over, we will cherish our objects, our spaces and our architecture. Our public spaces will become living breathing places where we see things in space and not on a screen. Nevertheless, digital will have to do for now.

How will COVID-19 affect Victoria Baths?

Tours, events and filming bring in most of the income that keeps the organisation afloat. As Victoria Baths was about to open for its 2020 season between spring and autumn, the COVID-19 pandemic could not have come at a worse time. As a result, the trust faces a challenging year. Brock says: “Our arts and music festival SpringFest 2020 is the first of many events we have had to cancel. We hope fans of Victoria Baths and supporters of Manchester’s vibrant arts scene can help us to bring this event to life in a virtual way. We don’t know how long the crisis will continue, or how many other events we’ll have to cancel or postpone. What we do know is that the impact on our cashflow is going to be huge.”

Nancy Collantine launched the artist-led project space Dez Rez Projects in December 2019 as a home for DIY artists’ projects and occasional pop-up exhibitions and “to create opportunities that are not currently out there for emerging artists”.

GALA:  An online exhibition of paintings, drawings and sculpture responding to and in support of historic Victoria Baths in Manchester from Dez Rez Projects is live on Instagram until May 2, 2020.

Baths, Washhouses and Art with Art Across

Art historian Sara Riccardi, founder of Art Across, has joined the Des Rez programme and will be doing a live ticketed event on the evening of April 29.  Riccardi will respond to the work of the artists in the exhibition historically, contextualising the Victoria Baths in a short journey through the  hygienic traditions of the Roman Empire, Turkish baths and Victorian Britain, and will be discussing the relationship between art and personal well-being. Tickets will be on a donation basis with 15 per cent of sales going to the #Backthebaths Crowdfunder appeal.

Some 15 per cent of sales of work will go to Victoria Baths and each artist will be donating a limited-edition print or original work on paper to the Victoria Baths Crowdfunder for the first six donations of £100 or more.

Prints for a Pound

Everyone who donates £1 to the Victoria Baths Fundraiser can unlock one of seven printable downloads of drawings by each of the artists available until May 2.

Victoria Baths is one of Manchester’s absolute gems, a historic building full of social history, a fantastic events venue and a popular visitor attraction; sometimes the pool is filled for special one-off Swim for Restoration events. The building is partly restored and is run by a charitable trust. Loved by Mancunians and visitors to the city alike, it’s impossible to imagine Manchester without Victoria Baths.